African Americans have enriched Maryland life in numerous ways. See how much you know about the Old Line State's black history.

Quiz Answer Key and Fun Facts
1. Frederick Douglass was born into slavery in Maryland in 1818 before becoming one of the nation's greatest abolitionist speakers, authors, and publishers. When he was an adolescent, he secretly taught himself to read and subsequently taught other slaves under cover of night. In what Baltimore shipbuilding neighborhood did he accomplish this?

Frederick Douglass worked for the Auld family in Fells Point, and returned as a teenager to work in a shipyard. This may have come in handy years later when Frederick escaped to Philadelphia and then to New York dressed as a free sailor.
2. Which president met Frederick Douglass with the words, "Here comes my friend Douglass" at a reception in the White House?

Although Douglass had differences in opinion with Lincoln, Douglass endorsed the president in both elections with his newspaper and on the lecture circuit. They met several times before Lincoln, worried that the Civil War could not be won, asked Douglass to make evacuation plans for blacks in the South in case the war was lost to the Confederacy. Of course, the plans were never put into operation.

The White House reception took place after the war had been won by the North.
3. What was the name of the newspaper Frederick Douglass published?

Douglass began printing this abolitionist newspaper in December of 1847 and wrote the last issue in 1863. Douglass also was a speaker for women's rights, became a U.S. Marshall, a Counsul-General to Haiti, and had a controversial second marriage to a white woman. You may read more about him in any of his three autobiographical works, the last of which is the "Life and Times of Frederick Douglass".
4. Harriet Tubman was also an important abolitionist born into slavery in Maryland. After her own escape from slavery, she came back to Maryland to assist the Underground Railroad. Approximately how many slaves is it believed she helped to freedom?

Harriet Tubman was known to carry a gun and threatened to shoot any slaves who tried to turn back. She worked closely with the famed abolitionist John Brown, but was not a part of his raid on Harpers Ferry because of illness.
5. What disease did Harriet Tubman reportedly suffer from?

Known to fall asleep while on the road suddenly and repeatedly, it is believed she developed narcolepsy from a head injury as a child. Despite this, she managed to not only run the Underground Railroad, but was a spy, a nurse, and a soldier during the Civil War.
6. Another Maryland-born slave who escaped to freedom was Josiah Henson. His autobiography, "The Life of Josiah Henson", became the basis for which book?

"The Life of Josiah Henson" was written in 1849, and in 1879 the title was changed to "Truth Stranger Than Fiction". Harriet Beecher Stowe read the book and reportedly based the character of Tom on Josiah.
7. Thurgood Marshall, the grandson of a slave, became the first black Supreme Court Justice. Born in Baltimore in 1908, he attended Lincoln University in Pennsylvania with Cab Calloway and Langston Hughes. Upon completion he was denied entry into which Maryland institution because of his race?

Upon his denial, Thurgood entered Howard University Law School. He later sued the University of Maryland when they would not accept Donald Gaines Murray, a black man, into their law school. This became the first of his many victories for minority rights.
8. Folk singer Bob Dylan is neither black nor from Maryland, however, one of his songs is about a black Maryland woman. This woman, who's name is in the song title, was struck by the cane of William Zantzinger at a Baltimore society function in 1963. Zantzinger, who was drinking, verbally assailed the 51 year old mother of ten and struck her for not fetching his drink quickly enough. When the woman died in a hospital the next day from a brain hemorrhage, he was arrested but only given a six month sentence. What is the name of the Dylan song that immortalized this woman?

Zantzinger was given a short sentence because a longer one would have necessitated putting him in a state facility, where more blacks resided. The judges feared he would have been killed. He was even allowed a delayed sentence for several weeks so that he could harvest his tobacco crops. All of this created quite an uproar in an already racially-tense 1963 Baltimore.

Clarence Mitchell was awarded the Presidential Medal of Freedom in 1980 by President Jimmy Carter. He died in 1984 in Washington, D.C. The Museum of Maryland African American History and Culture is named after Reginald F. Lewis and is due to open in the summer of 2005. For more information, visit www.africanamericanculture.org/
10. Born in a poor black neighborhood of Baltimore in 1948, Frizzell "Pee Wee" Gray went on to become a Congressman and head of the NAACP. Under what adopted name is he better known?

Kweisi Mfume means "conquering son of kings". Mfume held his post in Congress before leaving to head the NAACP (which moved to Baltimore in 1988). He plans on running for U.S. Senate in 2006 after Senator Paul Sarbanes retires.
Source: Author Scoob44 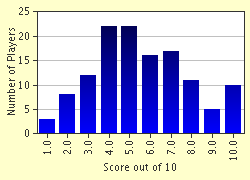 
Other Destinations
Explore Other Quizzes by Scoob44