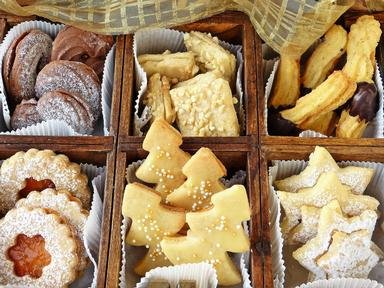 A Nice Cup of Tea and a Biscuit Quiz

Nothing is more quintessentially English than a nice cup of tea and a biscuit? Do you know your classic tea-time biscuits. Apologies to our American cousins who I believe may refer to a biscuit as a "cookie".

Quiz Answer Key and Fun Facts
1. I've just awoken and the electric teasmade has brewed a nice bedside cuppa for me. My fingers dip into a half open tubular packet and I pull out a plain round sweetmeal biscuit which I promptly dunk, quite contrary to good etiquette, into my cup of steaming tea. I am starting my day with a biscuit that is universally accepted as THE biscuit to enjoy with a nice cup of tea. Which biscuit am I enjoying?

This biscuit was first manufactured by Mc'Vities, in Edinburgh, in 1892 (no not the one I'm eating!). It is universally accepted as THE biscuit to enjoy with a cuppa char. Poor quality imitation ones can taste like cardboard no matter how high a quality the tea you dunk them in is.

They were originally advertised as "aiding digestion" although this was subsequently proven to be untrue by some well meaning scholarly type, who probably drank coffee anyway.
2. I head into the office and prepare myself for the days chores with another fine cup of tea and another biscuit. This time my sweet tooth prevails and I select a small biscuit made of two shortbread biscuits sandwiching a layer of raspberry flavoured plum jam. The jam is visible to me through a heart shaped hole in the centre of the upper biscuit. What biscuit do I eat?

The jam is billed as "raspberry flavour" although it is made from plums because, for some ridiculous scientific reason, raspberry jam wasn't up to the biscuit engineering task of welding the two biscuits together. Variants have had smiley face holes to reveal the jam, or even abstract slits. So be careful to look for the heart to be assured of a quality comestible.
3. Mid-morning break arrives and I retire to the office canteen to enjoy a nice cup of tea and another biscuit. This time it's a McVitie's chocolate digestive. What quaint term do the English use for this mid-morning tea break?

In the United Kingdom "elevenses" is a snack that is similar to afternoon tea, but is eaten in the morning. It will typically consist of some cake or biscuits with a cup of tea or coffee. The name refers to the time of day that it is taken i.e. around 11 a.m.
Paddington Bear often took "elevenses" at the antique shop on Portobello Road run by his friend Mr Gruber in the Michael Bond novels. Well, if the continentals can enjoy a 12 hour siesta who can bemoan the British a 10 minute tea and biscuit break?!
4. At lunchtime I take my packed lunch to the office restaurant and take the foul taste of vending machine tea away with one of my favourite treats, a "Jaffa Cake". But is it a biscuit?


Answer: A Jaffa Cake is a cake

It's a cake and its been proven at court! Mc'Vities, a.k.a. United Biscuits, have been making "Jaffa Cakes" for almost 60 years. It is made of a sponge base with a layer of orange jelly topped with a covering of chocolate.
Under UK law, no V.A.T. is charged on biscuits and cakes, they are "zero rated". Chocolate covered biscuits, however, are classed as luxury items and are subject to V.A.T. at 17.5%.
In 1991 Mc'Vities defended a court case brought by the government which attempted to classify them as biscuits and so render them liable to the V.A.T. charges.
Mc'Vities won their case on two counts;
a. Mc'Vities produced a giant "Jaffa Cake" as an exhibit at court in an effort to persuade the government that a "Jaffa Cake" was simply a mini cake.
b. They also argued that the distinction between cakes and biscuits is simply that cakes go hard when stale, whereas biscuits go soft. It was demonstrated that "Jaffa Cakes" become hard when stale and so Mc'Vities won the case.
5. Afternoon break arrives and I down tools. I bring a cup of tea to my desk and open my "stash draw" and select a favourite biscuit. It is constructed of two rectangular dark chocolate biscuits sandwiching chocolate fondant. The outer biscuits have 10 neatly aligned pin holes in them and a light dusting of sugar. What biscuit am I about to munch?

One of the elder statesmen of the biscuit tin,"The Bourbon" was introduced in 1910 by the Bermondsey based biscuit company "Peek Freans". It is apparently named after the House of Bourbon, an aristocratic French family, which seems a nonsense as the French are to biscuits as the British are to bread making.
6. Driving home from the office I rummage in the glove compartment and to my delight I pluck from some packaging a delicacy constructed of two broad, almost yellow, biscuits sandwiching a vanilla cream fondant and which bears a baroque style of pattern on each surface. What treasure have I found?

The almost classical "Custard Cream" is as British as a knotted hanky on the head of a British tourist in sunnier climes. Perfectly designed for man's incisors to tear apart and then gnaw rabbit-like at the fondant within! Don't be shy to admit it, we all do!
Dunkability is a low scoring index with this biscuit. The biscuit itself appears to have no tea retaining capabilities and the fondant will quickly melt to turn your tea into what would seem like a custard oil slick, not that a custard cream tastes of custard of course!
7. Arriving home I beat off the pet poodle, admire the toddler's artwork on my newly painted hallway wall and settle down with the wife for a fine cup of rosie lee and a special biscuit. This one is semi-sweet with raisins set between the two doughy biscuit layers and finished with a shiny non-sticky glaze. What is my treat?

The "Garibaldi" seemingly has more raisins in it than a sizeable fruit cake and is conveniently scored on the surface in places where you should most properly bite into it. It remains unclear whether the biscuit was named after being created in London to celebrate the visit of the Italian 19th Century military tactician and Italian state unifier Giuseppe Garibaldi or the bald policeman from "Babylon 5". One suspects the former!
8. Dinner over, I break from viewing yet another airing of "Carry On Camping" on T.V. to make the wife and me a nice cup of char. I bring her a small plate containing what I hope will be enticing biscuits. These medium-sized dark brown biscuits are superb for dunking and are made from, amongst other things, a well-known spice and molasses. The mottled surface of this single disc biscuit augments the crisp and crunchy experience of biting into it (unless of course it has been over-dunked"!). What is this biscuit?

A "Gingernut" is the spiciest biscuit in the tin, deriving its name from the spice "ginger" (perhaps not surprisingly) and the olde English word "nute" which was a name given to all sorts of small hard things. Not unique to Britain, this globally appreciated biscuit can generate a sensation from the mildly warming to the almost nuclear explosion of water thrown on top of a recently digested "pfahl" curry.
9. Just like Jack Horner in the nursery rhyme with his Christmas Pie, I stick my hand into the biscuit barrel to randomly select a biscuit as a final treat of the day before bedtime. My face drops as I pull out a pink rectangular block of what to me tastes like cardboard, covered in a sticky glaze. What un-appetising biscuit have I had the misfortune to have drawn out?

About as tasteless as a prawn cracker, this nasty little biscuit is always the last chosen from a selection box of biscuits. Whether you have ever bought any or not, there always seems to be remnants of one in the bottom of your empty biscuit barrel. Designed to sell air as a comestible the thing has what is akin to wafer adhesive within its brittle layers which masquerades as a fondant.
10. My day over I lay my head on the pillow and the vision I have before slumber is the biscuit lying beside my teasmade ready for my morning munchies. This time it is circular and wrapped in a square of foil bearing its name. This "noble" biscuit comes in two flavours the colour of the foil represents the flavour. One of these flavours is orange but I have selected the other colour for my morning snack. What biscuit have I selected?

The Burton's "Mint Viscount" falls into the category of an Easter egg or Christmas selection box delight, in my humble opinion. How could anything laden with chocolate, wrapped so beautifully and that bears an almost regal name fail to be? Once eaten, the foil can be smoothed flat and made into a scale model of Leeds Town Hall by the semi-skilled origami artisan. To the biscuit connoisseur this was always half the fun of this highly edible little biscuit with ideas above its station.

I hope you have enjoyed this off-beat quiz. I must recommend the book "Nice Cup Of Tea and a Sit Down" by Nice and Wifey from which ideas input into this quiz have been nurtured. Hilariously written, in the style perhaps of the great Bill Bryson, I giggled myself senseless through compilation of this quiz. If you've spent all your free cash on biscuits and can't afford the book then please visit their website at www.nicecupofteaandasitdown.com and entertain your chuckle muscles as I did, to the detriment of my family who I awoke in the wee hours with cacophonous laughter.
Source: Author Simon_Templar 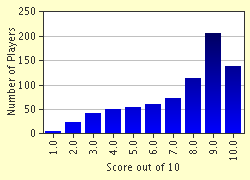 Related Quizzes
1. Which Christmas Cookies Began Where? Tough
2. COOKIES! Easier
3. Cookies and Milk Average
4. Name That Cookie! Easier
5. Cookies and Cakes and Other Sweet Bakes Average
6. How to Cook Like Heston: Chicken Average
7. Baking the Grade Easier
8. Grandma tries to teach Swimgirl how to cook! Easier
9. Ladles and Jellyspoons Average
10. Let's Bake Our Way Across the US! Average
11. Know your Sauce? Average
12. More Than a Filling Easier


Other Destinations
Explore Other Quizzes by Simon_Templar