Walnuts are the oldest known tree food, dating back to 10,000 BC. They are versatile and nutrient-rich. So why don't many people know much about them? How much do you know?

Juglans Regia is now the name of one of the most common species of walnut tree. It grows around the world, including in such diverse countries as the United States, Kazakhstan and China. However, it grows best in rich, deep soil with climates of plentiful sun and long summers.
2. The USA remained the world's largest exporter of walnuts in 2012, but in which state were 99 per cent of the nation's walnuts grown?

The Sacramento and San Joaquin valleys in California were the most prolific producers of walnuts in the USA in 2012. This is probably because they provide the mild but moderately warm climate that walnuts need, as well as fertile soils aided by the Sacramento-San Joaquin River Delta.
3. What is the most common major species of walnuts grown as food?

The Persian walnut (also known as the English walnut) originated in Persia (now Iran) many hundreds of years ago. The second most common species, the black walnut, is more recent and is native to North America. However, it has a very hard shell and so is less popular as food and more popular for its other by-products, such as oil and root stock for breeding.
4. What does the meat of a walnut usually look like when the shell is removed?

The meat of a walnut usually comes out of the shell in two halves. The wrinkled seed kernels are covered with a brown coat which contains antioxidants which protect the walnut from atmospheric oxygen that could cause decay.
5. Walnut oil is widely commercially available and can be used in cooking. Why is it not particularly good for frying?


Answer: It has a low smoke point

As it has a low smoke point, frying walnut oil will create a large amount of dark smoke very quickly. Also, heating can reduce the oil's flavour and create bitterness. Walnut oil does, however, contain large amounts of omega-3 fatty acids which are essential for humans and it is commonly used in salad dressings.
6. Walnuts have been shown to be very high in antioxidants and Vitamin E, both of which are important for human health. They are also rich in mono-unsaturated fatty acids and omega-3 fatty acids which can help to keep which parts of the body healthy?

Walnuts are rich in mono-unsaturated fatty acids like oleic acid and they are an excellent source of omega-3 fatty acids. They can help to reduce bad cholesterol in the blood and to prevent heart disease and circulatory problems.
7. You can store un-shelled walnuts in a cool, dry place, but how should you store shelled walnuts?


Answer: In an airtight container in the refrigerator

Shelled nuts may turn rancid if they are not kept within the refrigerator, and they should not be kept for too long. Shelled nuts, however, can be kept for many months in a cool, dry place.
8. The husks of walnuts have been used to make what product, which has been used for hundreds of years, including by Rembrandt and Leonardo Da Vinci?

Many great artists have used inks and paints which contain walnut husks. They are usually dark in colour and contain enough oil that they can be mashed down to a useful product. In medieval Rome, brown walnut husks were also used to create hair dye.
9. In England, walnuts are often eaten at Christmas. They are usually prepared in a manner which involves soaking them in brine and then adding an acidic solution before leaving them for some time. What are walnuts prepared this way called?

Pickling solution can contain vinegar, spices and/or sugar and pickled walnuts are usually left for a period of days, weeks or months, depending on how strong the pickled taste should be. These are often eaten with creamy blue cheese at Christmas time in England.
10. What colour are walnut husks before they turn brown and ripen?

Many people make pickled walnuts using nuts that have come from green husks - their less ripened state gives a different flavour to a the ripened nut. In China, pairs of green husks are sold for a traditional form of gambling.
Source: Author suzidunc 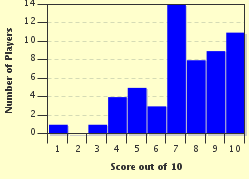 Related Quizzes
1. Totally Nuts Average
2. You Are Driving Me Nuts! Difficult
3. Chestnuts Roasting on an Open Fire Average
4. What Kind of "Nut" Are You? Average
5. Peanut Butter Difficult
6. "Sometimes You Feel Like a Nut" Average
7. Peanuts! Average
8. Zooming in on Peanut Butter Average
9. Where'd That Squirrel Come From? Average
10. Warning: May Contain Nuts Very Easy
11. Mixed Nuts! Average
12. Is it 'More Than Pecan' or 'Icon Pecan'? Average