Onions are a most amazing food. Here are ten questions of this interesting little allium, so just take a deep breath and enjoy the quiz.

Quiz Answer Key and Fun Facts
1. Allium is the term used for a group of plants usually referred to as the onion genus. Originally though, Allium was the Latin word for which specific aromatic food?

Members of this family of plants include onions, shallots, leeks, scallions, garlic and chives. Some other plants belonging to this family are used for ornamental purposes as well, coming in a wide variety of shapes and colours, and producing pretty little flowers. Amazingly so, there are about 750 plants belonging under the Allium classification.

These either grow from bulbs or from seeds.
2. Onions are used all over the world for the flavour they bring to meals. Cajun cuisine in particular uses a combination of onions, celery and bell peppers in a large proportion of their dishes. When grouped together, what spiritual term is given to these three foods?

Cajun cuisine is a style of cooking produced by French speaking settlers from Canada who were deported from there by the British, and taken to the Louisiana area of the United States instead. The name "Holy Trinity" was probably not intended to be disrespectful as they were very staunch Catholics.

A typical Cajun meal consists of three pots. One contains the main meal, the second contains some sort of cereal dish, and the third is usually reserved for whatever seasonal vegetables are available. Their food is spicy, full of flavour and very tasty, and, if you're like me, it is highly recommended that it should be followed by an indigestion tablet.
3. Onions normally are available in three colours - yellow, red or white. Which of the three can be used when cooking just about anything requiring a savoury flavour?

Yellow onions have a very full flavour. Therefore, when other coloured onions aren't available for specific dishes, yellow can always be used instead. Red onions are the preferred choice when grilling meats, and white onions, which have a slightly sweeter taste, are the preferred choice in Mexican cuisine. Any coloured onions can also be pickled and eaten as a snack if you have a cast iron stomach. Small pickled onions, accompanied by dainty squares of cheese are frequently seen served up as appertisers before meals, and apparently, though this is news to me, sold as side dishes for fish and chips in Australia and the UK.

There is also a type of onion known as a pickler onion, but just to be confusing, these usually aren't pickled at all.
4. Onions have been used as a food source for several thousand years. In which ancient civilisation were they worshipped?

How odd. Worshipping an onion. Nevertheless, this was the case. Though traces of onions have been found dating back to 5,000 BC in Bronze Age settlements, it is thought that this little plant, which originally grew wild, was first cultivated by the ancient Egyptians.

They believed its shape symbolised continuing life after death, and, just as a form of insurance, were known to put an onion in each eye of a deceased relative ready for burial. Traces of onions have even been found in the eyeballs of the pharaoh Ramesses IV. Let's hope he was dead first.

It is also believed that workers engaged in the construction of the pyramids were fed on radishes and onions. Dear me, no wonder they took so long to build them. Too many pit stops.
5. In ancient Greece, athletes competing for games believed that eating large servings of onions would help lighten which fluidic part of their system considered one of the four humours?


Answer: The balance of their blood

The ancient Greeks believed that the internal optimum working of the body centred round the four humours of phlegm, black bile, yellow bile and blood. Games in ancient Greece were held between representatives from the various city states to honour the god Zeus. Though it is uncertain when these combined games actually began, written records at least date from 776 BC. Games helped spread the Greek culture throughout the area of the Mediterranean at this time, along with religious festival and artistic competitions.

In ancient Rome on the other hand, onions weren't taken internally by their sportsmen, or more specifically, their gladiators. Instead, they rubbed their bodies down with raw onions because they believed it helped firm their muscles. Hungry lions so would have appreciated that extra flavour.
6. By the Middle Ages, European doctors were prescribing onions to help ease constipation, cure snakebite, ease coughs, relieve headaches - and fix which condition having a negative self-image effect on men?

The onion was also recommended by doctors from this era to help the gentlemen with problems of impotence. In fact, the humble onion during this period of history was considered such an important food, that it was used in some cases instead of money - to pay rent, for example, or to give as gifts to people. Even today, the onion is still considered to be quite an effective palliative for constipation and colds. So who knows, perhaps it really does work in all the other areas for which it was being used way back then.

Therefore, if at any time in the future, you encounter a bald man walking along rubbing an onion on his head, bear this in mind. He isn't insane after all.
7. Who introduced the *cultivated* onion to North America?

Columbus brought the cultivated onion along to America on his 1492 voyage. This was a case of taking coals to Newcastle though, because the onion already grew wild in that part of the world, and was being utilised by Native American Indians in various ways.

These included for consumption, flavouring, poultices, dye-making purposes and in the creation of various shaped toys. There's however absolutely no truth though to the rumour that Hiawatha's name was really Hiya-onion. Such was the value of the little onion by the early pilgrims, it is believed that as soon as land was cleared, bulb onions were the first crops to be planted.
8. By the early 1700s, doctors were prescribing onions to cure which sorrowful affliction in women?

How that was supposed to help is anybody's guess, but the medical profession, such as it was, had to be credited for at least attempting to deal with this heart-breaking problem. Unfortunately though, they also recommended feeding onions to cats, dogs, horses and cattle to cure a smilar problem, sometimes with disastrous results.

Modern medical advances have shown that onions are actually toxic to many animals.
9. All sorts of claims have been made today about how effective onions are in curing any number of conditions. Most have yet to be proved. Yet onions are also avoided in some cultures. Is it true, for example, that some self-denying sects in India refuse to eat onions because they believe they're aphrodisiacs?

The sale of onions has shot up accordingly in other parts of the world. Some other claims made about the curative properties of this food include its cure for, or prevention of, heart diseases, osteoporosis, cholesterol problems, arthritis, diabetes and cancer.

In some parts of the world, onions are also used to heal boils and blisters and insect stings by placing one that is half baked, with a small amount of sugar, onto the afflicted area and leaving it there overnight.
10. The acid generated from sliced onions makes many an eye water uncontrollably. Some touted ways to prevent this happening are cutting the onion under water, chilling the onion prior to cutting, leaving the root of the onion intact, having a fan blow in your face as you peel the little blighter - and which other method?

Well, one supposes the goggles would at least help if you were peeling the onions under water. I've yet to hear of anyone having success with any of the above methods of preventing onions' deadly effects on the eyes, but hope springs eternal.
Source: Author Creedy 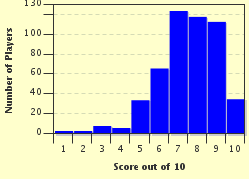