Purple and food... Not exactly a pretty sounding pair, but they are all around us in the aisles of the supermarket. Most of them are super foods, so let's have fun.

Quiz Answer Key and Fun Facts
1. First off, we have ourselves this root vegetable which also comes in purple. This little fellow comes from South America and has made quite a following in Ireland under the moniker of 'Cream of the Crop'. What do you make of it?

Purple potatoes have become quite a mainstay in many supermarkets around the world. In fact, Kettle Foods even markets chips made of purple potatoes, and trust me, they're pretty good.
2. We come to another basket at the fruit and vegetable aisle and here comes the eggplant. Good things come from this big fat thing, including this Greek layered dish, beautiful and almost resembles lasagna. What am I salivating about?

It's a Greek staple, layered with meat such as lamb or beef and plenty of Béchamel sauce, or white sauce to some. Some go all out saying it's THE national dish of Greece, but their not alone. Turkey also has moussaka, but it's sauteed on a pan instead of being baked.
3. Here we come to a vegetable that strikes fear in many kids, and now that it has a purple tinge will only make them quiver even more than seeing Barney the Dinosaur again. This relative of the Cabbage is an infamous one for the youngsters. What could strike such fear?

Cauliflower has such a bad reputation... I pity it. But, thanks to modern viewing, many Youtube chefs and cooks have made it pretty cool! Some have used the bulb to turn it into a vegan pizza crust, gluten free and looks like a dough/crust to me.
4. Another great super food that gets the population riled up is the beetroot, plain and simple. It bleeds and makes a fine mess, but has such culinary potential. In fact several Eastern Europeans nation loves making a soup with it. While I could get it in all of these countries, where would I have to look for the origin of this soup?

Plain and simple again, the Ukraine loves Borscht. It's hearty which would be perfect in the cold weather. They probably need lots of it now...
5. This little puppy, looks scary to many in its normal colors. Yes, this comes in purple too. They always say eating this will make your urine a little foul in scent, okay... VERY foul. How bad could it be? Or should I say, what could it be?

Asparagus can make foul smells, but it's a great source of fiber, Vitamins A, C, E and K and folate, which can help with an anti-aging diet if you pair it with foods rich in Vitamin B12.
6. Here comes some favorites of mine. We have prunes and raisins, dried fruits a plenty. They have great flavor and are really good for you. They can also be used in Jewish stew that's made with root vegetables to create something sweet. What could this creation be?

Tzimmes is a dish not so well known in the world, but this is something to behold. It's brought out during Rosh Hashanah and symbolizes good luck and riches to come.
7. Not too bad so far isn't it? Well, let's liven things up with this vibrant super food. I plan to make a compote of these little balls filled with anti-oxidants, packed full of it. What could fit this category? Hint: This food's species is known as Cyanococcus.

I hope you feel comfy so far. Blueberries are some of the greatest health foods in many of our pantries, and make a lovely compote since they can thicken sauces really well.
8. Uh oh, something that could scare the weak stomachs. Ok I'm kidding, but not all feel so well about this. Also known as dumur, what fruit can also be purple and had its leaves famously used to cover private parts?

Figs (and fig leaves, haha) can be seen as fig rolls and many other confections but many don't use them too often due to them being such fussy fruit. No wonder not many see them as pleasant to look at.
9. Here's to another purple little friend of ours, it's the crunchy little cabbage, which is in fact not that little. Anyway, just like regular cabbage, it can be preserved. But, what would it be called if it was pickled and preserved (it is a typical German dish)?

Rotkraut has less of a tang compared to its white cousin, and is normally served alongside Sauerbraten, which means 'sour roast'. It is what it states, a preserved sour roast meat.
10. Finally, the end of our journey and we have...a flower. Not just any flower, it's a Lavender, a flower that can be added in a famous herb blend from France. So this last purple journey ends with this little assignment, name the region of France this herb blend comes from.

Herbes de Provence is a mix of rosemary, sage, thyme, oregano and lavender for an extra kick of floral note. Often it is used for meats and absolutely lovely with shrimp or prawns.
Source: Author Abby_91 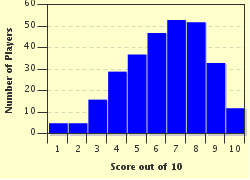 
Other Destinations
Explore Other Quizzes by Abby_91