Ahh, do you know what it means to miss New Orleans? See if you can translate the following snippets of New Orleans lingo into the King's English. Good Luck!


Answer: Hey, how are you doing? How is your family?


Answer: I was buying groceries and purchased an avocado, a local vegetable and some mayonnaise.

In New Orleans, people "make" groceries rather than "buy" them. An alligator pear is of course an avocado, and a mirliton is a local squash type vegetable that grows wild throughout Louisiana. It is often seen in casseroles and soups with shrimp. Mayonnaise is prevalent throughout the city, and is of course pronounced "mynez".
3. I'll take me a po-boy. Dressed.


Answer: I would like a hoagie style sandwich. With lettuce, tomato and mayonnaise, please.

A "Po-boy" or "Poor boy" is a sandwich similar to a Massachusetts grinder or Philadelphia's submarine sandwich. The po-boy is unique because of its delightfully airy French bread and regional ingredients, such as fried catfish, fried shrimp or crawfish.

A roast beef Po-boy is surprising to non-natives because it is usually so soaked in gravy that it needs to be eaten with a knife and fork. When ordering a Po-boy, you want it either "dressed" or perhaps with "nuttinonit." (nothing on it.)
4. Camille ran for da street car with her go-cup, crossed the banquette and fell up all over the neutral ground.


Answer: Camille chased the streetcar with her alcoholic beverage, crossed the sidewalk and fell down on the median.

Running with a Go-cup is never a good idea. New Orleans is one of those rare places where you can actually walk around with a plastic cup filled with an alcoholic beverage without being arrested. Go-cups are often seen on parade routes during Mardi Gras. "Banquette" is an ancient New Orleans word for a sidewalk, and the "neutral ground" is a median.

Many streets in New Orleans are divided and have neutral grounds.
5. I might could take Momma's pirogue to the Bonnet Carre Spillway to see about dem crabs.


Answer: I might be able to take my mother's shallow canoe on a famous New Orleans waterway to catch some crabs.

A pirogue (prounounced pee-row) is a flat-bottomed canoe perfect for cruising around the bayous of Louisiana. The Bonnet Carre Spillway is a flood control system that diverts water from the Mississippi River into Lake Pontchartrain in times of heavy rain or when the Mississippi becomes too high. Part of interstate I-10 goes over the spillway, and to the untrained eye, it just looks like a great big shallow part of Lake Pontchartrain. Lake Pontchartrain is the home of many crabs, as well.
6. Endymion's krewe has da most throws f'sure, but Zulu's krewe got dem coconuts.


Answer: The social club Endymion throws the most trinkets during their Mardi Gras parade, but the social club of Zulu hands out painted coconuts in theirs.

Mardi Gras parades are put on by social clubs called Krewes (pronounced crues), usually with mythological names like Bacchus or Orpheus. The members ride on floats and throw trinkets to the gathered crowds, like plastic cups, beads, candy and doubloons (which are aluminum or wooden dollar-sized coins emblazoned with the krewe's name and year.) Zulu is an African-American Krewe famous for handing out hand-painted coconuts to a lucky few. (They used to throw them, but that proved unsafe.)
7. Boudreaux is f'unna gonna get his picture made.


Answer: Boudreaux is getting ready to have his picture taken.

"F'unna gonna" evolved from the Southern expression "fixing to" or getting ready to do something. In New Orleans, you don't have your picture taken, you have it made!
8. Hey Bra, I didn't know your shotgun was a camelback.


Answer: Hey dude, I didn't know your typical New Orleans style house also had a second story on the back of it!

"Bra" is usually a term used by one guy to another, either by friends or acquaintances. Shotgun houses are common throughout New Orleans. They are long, skinny houses usually with a living area, kitchen, bedroom and spare room all joined together in a row, usually without a hallway. The shotgun name is because supposedly you can open the front door, and shoot a gun straight out the back door. A camelback is a shotgun house with a second story stuck on the back of the house.
9. My Marraine is staying by my house in Fat City.


Answer: My Godmother is staying at my house in Metairie, Louisiana.

Marraine is an old Cajun/French term for Godmother. New Orleanians love to say "by" when the rest of the country says "at". And when the rest of the country would say "by", New Orleanians sometimes say "up". (For instance, "I passed up my turn, and now I'm lost.") Fat City is a neighborhood within the suburb of Metairie, known for its restaurants, and bars that are particularly lively during Carnival time.
10. Awrite, den.

Much like the Hawaiian "Aloha", "awrite, den" or "All right, then" pretty much covers all small talk in New Orleans. Be it a positive acknowledgment or the ending of a phone conversation, "awrite, den" is an appropriate choice of words.
Source: Author mbovary 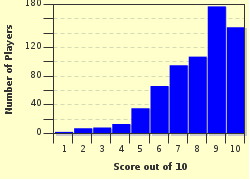 
Other Destinations
Explore Other Quizzes by mbovary