Hey! Here is a quiz about ONE of my favorite bands of all time. I have been listening to them since the good old days and have developed quite a bit of knowledge on them... Here is a quiz to see if who can keep up. Enjoy!

Quiz Answer Key and Fun Facts
1. Which one of these was not an early venue for DMB gigs?

Rare, good quality early recordings of shows at Floodzone and Trax are a DMB trader's dream! These shows offer great insight into the evolution of the band.
2. What was the name of the venue the DMB played every New Years Eve for 5 years in the early 1990's?

These are some of the most classic shows they ever performed.
3. Which of these is not a DMB song that was recorded in the 1990s?


Answer: If I Had It All

All of these songs had been recorded in live form or on and EP before 1997. "If I Had it All" was on their "Everyday" album.
4. The popular song "Satellite" was not always known by this name and at one point had completely different lyrics to the same basic tune. What was the original name of this song?

Matthews apparently forgot the original words to this song. The original lyrics ("In my life never before have I, lover, so adored/ Her eyes, her hair everthings she says/ I am running, After Her...") were quite the love song. So in keeping to the melody he just rewrote the lyrics and dedicated it to his mom.
5. Which of these DMB songs appears on an album entitled "Live on Letterman: Music From the Late Show"?

"Help Myself" appears on the "Scream 2" soundtrack. The other songs are on either live albums or full length LP's.
6. What is the name of the person who played keyboards for the band in their early years?

Some of the greatest earlier recordings of DMB songs include this man's keyboarding skills.
7. Which of the following did DMB collaborate with in February of 1995?

These shows are some of the most interesting live shows out there. Not surprisingly, the tapes of the concerts are also the most coveted.
8. Which of these people played a guest appearance with DMB at the Roseland Ballroom on February 24, 1995?

Dave announces him as "Biggie John Popper" as they rock into "What Would You Say", and "Say Goodbye" with John Popper performing background harmonica. It is to say the least, very, very cool.
9. What DMB song is also known "Always"?

This is a beautiful love song that is most used as a filler in between songs at DMB shows recently. Yet in the old days it was a full length song that can still be found on old DMB concert tapes.
10. What year did Dave Matthews write the song "Cry Freedom"?

Just added this question in because it is one of my favorite DMB songs. It screams message and emotion almost more that any other DMB song. Some other songs that display such an emotional and political note are "Don't Drink the Water" and the unfortunate "I Did it".
Source: Author melonhead7 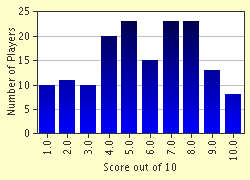 
Other Destinations
Explore Other Quizzes by melonhead7