Here's a quiz on the Dave Matthews Band.

Quiz Answer Key and Fun Facts
1. What was the only song that DMB won a Grammy for?


Answer: So Much To Say

At the Grammys, February 26, 1997, Dave and the boys took home their one and only Grammy to date for 'So Much To Say'
2. When is 'Dave Matthews Band Day' in their home town of Charlottesville?

Stefan's child's real name is Diego, but is nicknamed, Diggy.
4. Where is Dave originally from?

Dave was born on January 9, 1967 in Johannesburgh, South Africa.
5. At what age did Dave first take guitar lessons?

Dave took lessons when he was nine and admits that he wasn't a very good student.
6. What band was Carter playing with from 1984 to 1990?

'All Along The Watchtower' is by Bob Dylan, 'Tangerine' by Led Zeppelin and 'Long Black Veil' is by Johhny Cash
8. What magazine called Dave 'The King Of Rock(Who Knew?)'?

July 1998, Dave appeared on the cover of Spin with the title, 'Dave Matthews Is The King Of Rock(who knew?)'
9. Which one is not original artwork by Dave?

Wordy Blue can be found on a DMB postcard and Strangely Brown and the Dancing 8 appear on shirts.
10. What is Dave's dog's name? 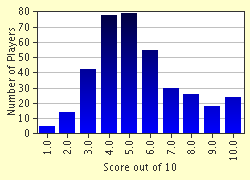 
Other Destinations
Explore Other Quizzes by hollandmb