Do you know their videos? Let's see if you can get it all right in this quiz.

Quiz Answer Key and Fun Facts
1. In this video, a lady is walking in a park in a wedding dress while members of Duran Duran are singing in the park. What is this video?

This song is one of the best from their 1993 album 'The Wedding Album'.
2. In this video, they are trying to blow up the Eiffel Tower. What is this famous video?


Answer: A View To A Kill

This song was a soundtrack for the James Bond movie 'A View To A Kill'. It was the first ever James Bond soundtrack to be at the number one spot in the U.S chart for a long period of time!
3. This video is kinda weird to me. They are singing in a room surrounded by fish tanks and inside the fish tank is a lady trying to break free from the chains. A man is wearing a dress and putting on lipstick and an old couple are sitting together. What is this video?

This song is also from their hit album 'The Wedding Album'.
4. Nick is mourning a friend while John attends a church. Simon is singing while looking around his surroundings. What is this video?


Answer: Do You Believe In Shame

This song was their third single off their album "Big Thing". Although it didn't made well in the charts, the song was great.
5. Which video shows John strapped to a roof of a Mercedes Benz and Simon strapped to a spinning windmill on which he almost lost his life?

In the video, Simon's head got stuck in the water for two minutes and it was a near death experience for him. They also won Best British Video for this video in 1985.
6. In this video, they were seen on a yacht; it was filmed over the crystal blue Caribbean Sea. What is this famous video?

This song was the best in the 80s and is still heard today.
7. This was the first video to be created entirely in Macromedia Flash animation. This video is ...?


Answer: Someone Else Not Me

This song was from their album "Pop Trash".
8. This video shows a lady in her apartment while members of Duran Duran's faces were been made into death masks and been put on mannequins. Only the beginning and the end were the real members. What is this famous dance hit?


Answer: All She Wants Is

This song was from their hit album "Big Thing". It did very well on the charts.
9. The video "I Don't Want Your Love" shows them singing in a courtroom.

This was another song from their album "Big Thing".
10. Members of Duran Duran are seen acting as doctors wearing white suits and thick glasses with models in rehab. What is this video?

This song was from their album 'Red Carpet Massacre'. Although it didn't make it to the charts, there are some interesting songs inside. Thank you for playing my quiz!
Source: Author csi_mfan 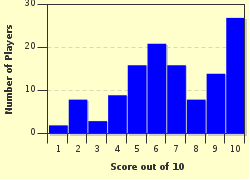 
Other Destinations
Explore Other Quizzes by csi_mfan