This quiz is on the many music videos of the great 80s band Duran Duran. Figure out what video is being referred to from the description. This quiz spans their whole career, from 1981 to the present.

Quiz Answer Key and Fun Facts
1. Let's start from the beginning: A blue room, where the band plays, Roger is looking up into space, interesting facts are given in the middle of the video:

"Planet Earth" was the first single off of the band's debut self-titled album. It was a big hit in the UK and eventually received praise in America as well. The following single, "Careless Memories", didn't do as well.
2. In this video, the band plays in a room surrounded by fish tanks, and a chained woman is trying to reach the surface of the water she is drowning in. A couple lies in bed, and a man puts on lipstick:

"Come Undone" was a single off of Duran Duran's second self-titled album, commonly known as "The Wedding Album". This album was considered the comeback of the band and proved they were more than pretty boys in mascara.
3. In this one, the "Fab Five" hang out on an expensive yacht in suits, John raids a beach, and Simon gets pulled into the water; the big hint here is the yacht:

"Rio" was the epitome of the 80s video. It became a huge hit and its eponymous album has truly become a classic. The videos for many of the singles on "Rio", but not the title song, were filmed in Sri Lanka.
4. This one was first banned from American television. It shows the band playing music in a wrestling ring while a sumo wrestler prances around and beautiful women drink champagne:

"Girls on Film" is another classic 80s video. The single that followed "Careless Memories" (see question 1) did very much better than its predecessor. Recently, it received a "dishonorable mention" for the controversy it caused on MTV's "Most Controversial Videos".
5. This video is set in France, where the guys re-enact the French Revolution itself, and fireworks are set off at the end of the video:

"New Moon on Monday" was a single off of "Seven and the Ragged Tiger", Duran Duran's very successful third album. It was filmed on location in France, and begins with a man presenting a show in French.
6. This video was very dark and the guys were dressed up in leather jackets. Simon was strapped on to a mill, which accidentally stopped during one of the tapes with his head underwater, almost causing his death:

"Wild Boys" was a non-album track, and was originally for a movie of the same name. The movie was never released, but the song became another hit.
7. This live video was filmed in Toronto and California and shows one of the first concerts to have large screens portraying the band, so that people further back can see:

This video was filmed on the band's 1984 world tour promoting "Seven and the Ragged Tiger", and the making of the video was shown in the home video "Sing Blue Silver".
8. Spys, secret gadgets, Simon blowing up the Eiffel Tower:


Answer: A View to a Kill

"A View to a Kill" was the theme song for the James Bond movie of the same name. The final line spoken in the video was "Bon. Simon Le Bon".
9. This video shows a woman dressed as a bride walking around what appears to be a park. The band plays in a dark room where white light plays around them:

This song went to number 3 on the American charts. It was the return of Duran Duran, and they proved they knew the 80s were over. This song was from "The Wedding Album".
10. In this video, considered by VH1 to be the number 3 video of the 80s, the guys walk through the streets of Sri Lanka, chase a girl through the woods, swim, and throw a table over at a restaurant: 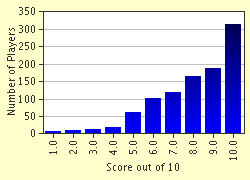 
Other Destinations
Explore Other Quizzes by LunaSkye17