Quiz Answer Key and Fun Facts
1. The band are wearing matching outfits except for a memorable line when three members are dressed in army uniforms. What is the video?


Answer: Is There Something I Should Know

Duran Duran first came to our attention in 1981 with their debut single "Planet Earth" and a self-titled album. The band consisted of a bassist (John Taylor, real name Nigel), a guitarist (Andy Taylor), a drummer (Roger Taylor - not to be confused with the Roger Taylor of the band, Queen), a keyboardist (Nick Rhodes - real surname is Bates) and a singer called Simon Le Bon.

They formed in 1978 in Birmingham, England and toured with Hazel O Connor before signing their own record deal in 1980.
2. Two lovers watch the stars, you see the band's figures outlined in the stars and the girl gets pushed around in a trolley by her boyfriend. What is this video?

"What Happens Tomorrow" reached number 13 in January 2005 in the UK. It was the band's second single released off their come-back album "Astronaut." The band reformed with the original five members (Andy, John, Nick, Roger and Simon) in 2001.
3. Sunny weather, clear water, a girl in colourful dresses, a yacht, filmed in Antigua. Do I need to say any more about this classic 80s video?

"Rio" was the title of the band's second album, which became a multi-platinum like their third album, "Seven and the Ragged Tiger". Other songs on the "Rio" album were the other exotic videos "Save a Prayer", "Hungry Like the Wolf", and "Lonely in Your Nightmare", all filmed in Sri Lanka.
During the filming of "Rio", the model in the video, Rema, was covered in glass when the wind blew a sheet of glass over her.
4. The band are in a bright orange room, an old face has appeared in the background after ten years of leaving the band. What is the video?

The old face = Roger Taylor. Roger left the band in 1985 due to pressures and stress. The band's last performance as the original five was "Live Aid" in Philadelphia. Andy Taylor left a year later to pursue a solo career, which he did not tell the other members who were working on their 1986 album "Notorious."
"Perfect Day" was an original hit from Lou Reed. Duran Duran covered it in 1995 and then it was covered again for "Children in Need" in 1997 by various singers and groups including Lou Reed, Heather Small and Boyzone.
5. A live performance in America, a man gets a bucket of water in his face and Andy misses Simon! Which video is this?

What I mean by "Andy misses Simon", in the middle of the video he swings his guitar around towards Simon but he ducks in time.
Probably one of their most memorable videos partly because of the waterfall falling onto the crowd (special computer effects!). The only Duran video with a live performance.
"The Reflex" was the band's second UK number one in 1984 which was at the top spot for the whole of May.
6. The band perform in flames, a blonde model poses to the camera and dances behind Nick a lot. What is the video?

"Serious" was released in 1990 after the band did a line up change after the departure of Roger and Andy. Warren Cuccurullo (a member of Missing Persons) took over the lead guitar while Sterling Campbell (who left soon after the release of the album "Liberty") took over the drums.
The blonde model in the video is Tess Daly who married Vernon Kay (British television presenter) in 2001. She has presented some British television shows like "Strictly Come Dancing."
7. Two dancers do a dance in the middle and Roger gets a sore neck! Which video is this?

"Planet Earth" was the band's first single released in 1981. It is supposed to be a cliff that they are performing on, according to Simon on VH1's "Duran Duran's Greatest Hits." Roger's head gets tilted back to reveal his Adam's apple at the beginning and end of the video.
8. The remaining Duranies go to a mannequin shop and buy a robotic woman to do their housework. What is this video?

"Electric Barbarella" was released in 1997 off the album "Meddazaland." John left the band in August that year and his vocals were taken off the album. Wes Wehmiller (1972 - 2005) took John's place as bass player for Duran Duran until 2001 when the original five reformed and he and Warren were kicked out.
9. A dark video with some of the band wearing jeans! John is attached to a car while Simon is spinning around. What is this mysterious video?

"Wild Boys" was originally made as a soundtrack to a film called "The Wild Boys" directed by Russell Mulcahy (who also directed this video, "Rio" and Elton JOhn's video "I'm Still Standing"). The film was never released. During the making of the video, Simon's head was underwater for nearly two minutes when the windmill he was attached to got stuck with his head in the water.

The making of the video features on the DVD of "Arena," the band's feature film, when Dr. Durand tries to kill them (if you've seen the 1968 film "Barbarella" you'll know more about Durand Durand, the villain whom the band named themselves after.) John and Nick named the band, but did not realise that it was spelt with a "d" on the end of each word. "Barbarella" was played by Jane Fonda.
10. Lastly, the band are in France. Nick and John ride on a horse and cart, Simon gets on the back of a motorbike and fireworks are let off at the end of the video with the band singing away. What is this video?

"New Moon on Monday" was released in 1984 off the "Seven and the Ragged Tiger" album. In the video, the band re-enact the French Revolution with the fellow villagers. There is a longer version to the video with a different introduction.
"A View to a Kill" was the theme tune to the James Bond film in 1985. John is so obsessed with Bond that he brought a replica of the Aston Martin in "Goldfinger" but never drove it once. He has also dated Janine Andrews who starred in "Octopussy."
Source: Author sahara1977 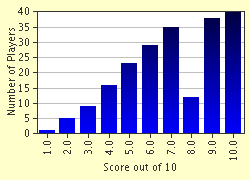