How much do you think you know about the greatest band in the world? Why don't you put yourself to the test.

Quiz Answer Key and Fun Facts
1. Duran Duran got their name from the Jane Fonda 1960's cult classic, "Barbarella". What is the correct spelling of the character's name?

Released in 1968, it was directed by Roger Vadim. It was based on the French comic strip about a 41st Century female Space Traveler.
2. John Taylor and Andy Taylor began performing with Power Station in 1984 with Tony Thompson and Robert Palmer. Their biggest hit, "Some Like it Hot", appeared in which 1985 Chevy Chase film?

The scene it appeared in was Rusty's fantasy when they were on the plane to England.
3. When in Australia in 1983, John Taylor was in a car accident on Sydney Harbor Bridge when his car went out of control. What kind of car was he driving?

They began their "Seven and the Ragged Tiger" tour in Australia after completing the album there.
4. What is the name of the book Nick Rhodes released in November 1984, which featured Polaroids he had taken and manipulated on the computer?

5. When Simon first asked Yasmin out on their first date, whom did she say, jokingly, that she'd prefer to go out with?

After Yasmin said this, she says Simon got really angry and she got really embarrassed and apologized. (reference http://yasminlebon.hispeed.com/interviews/intframe.htm?amore.html)
6. Which film released in 2001 featured Duran Duran's 1986 hit, "Notorious"?

7. Duran Duran approached director Phillip Noyce to do the theme song for which film?

"The Saint" was released in 1997. The song was "Out of My Mind". It debuted at 21 on the UK charts but dropped to 41 the following week.
8. Which Duran Duran band member approached James Bond producer Albert Broccoli at a party and asked to do a theme song for the upcoming film?

John is a big fan of the James Bond series and has even said that it is a borderline obsession.
9. What is so special about the "Someone Else Not Me" video?


Answer: It was the first video broadcast on MTV using Flash Technology

10. What was the name of the show in 1985 that Bass Guitarist John Taylor made his acting debut in?

John played 'the Hacker' in the pilot episode. Since then he has stared in such films as "Sugar Town", "Vegas, City of Dreams", and "The Flintstones in Viva Rock Vegas."
11. Roger Taylor announced he will not return to Duran Duran in December 1985 due to...

After leaving, Roger moved to a farm in Gloucestershire with his family.
12. What was the 1997 tour called?

"Ultra Chrome, Latex and Steel" was what Electric Barbarella was made out of ("Medazzaland" - their 1997 album release).
13. In 1982, which popular fellow new wave group's tour did Duran Duran support?


Answer: Something I Should Know

"Don't tell me you're easy on me/ you're about as easy as a nuclear war." Probably Duran Duran's most controversial and famous lyrics.
15. What has Simon LeBon reportedly worn when he auditioned for the band? 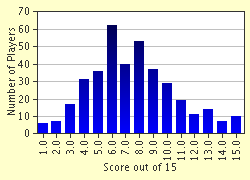 
Other Destinations
Explore Other Quizzes by princesschakra