I'll give you a cryptic clue and you guess the song... The quiz is a bit like cryptic crosswords. The clue will have something to do with the lyrics of a Duran Duran song, so you need to know your lyrics well!

Quiz Answer Key and Fun Facts
1. The instructions for attaching Simon Le Bon to your house?

The lyric is: 'I'm a dotted line. Cut the corners, stick me to your door...'.
'Sound of Thunder' can be found on the debut album and is a very good song, in my opinion!
2. A painting and electrical device for sale?

'I sold the Renoir and the TV set'. The music video for 'The Reflex' is just the song being performed on the 'Arena' tour.
3. Setting the floor alight?

'Burning the ground, I break from the crowd'. This lyric is where the title of 'Burning the Ground', a remix of their songs released by them in 1990, comes from.
4. A drinking celebration in a hotel- and it may last all night...


Answer: Too Much Information

'A cola manufacturer is sponsoring the war'. This song, released in 1993, is basically a rant against TV and can be found on 'The Wedding Album'.
7. That's a lot of Sundays!


Answer: I Don't Want Your Love

'When you understand me, you might feel good around me'. 'I Don't Want Your Love' is from the 'Big Thing' album.
9. Sing a coloured song?

'Sing blue silver...'. Apparently this little line, which is also the subtitle for
'The Chauffeur', was from an old sci-fi programme from the 60s where characters had to sing 'blue silver' when they wanted to time travel.
10. Put on make-up for a morbid show?

'Apply your lipstick for dying in public...'. This is from the eponymous most recent album, but I imagine the video from 'Come Undone' came into your minds, as there is a man who is a secret drag queen in it.
Source: Author kelby_lake 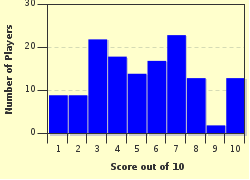 
Other Destinations
Explore Other Quizzes by kelby_lake