A Duran Duran quiz for any true Duranie with too much time on their hands (well, back in the 80's anyway).

Quiz Answer Key and Fun Facts
1. We all know that Nick Rhodes' real last name is Bates. Where did he come up with the name Rhodes?


Answer: It was a type of synthesizer/keyboard

Rhodes keyboards are still being sold today.
2. John has been linked to several high-profile celebrities. Which high-profile model did John date in the 1980's?

Renee is now married and a mother in her native Denmark.
3. What are the astrological signs of the five members (Simon, John, Nick, Andy and Roger)?

5. More questions about Simon. What did Simon wear to his Duran Duran audition?

Nick has been quoted as saying "Anyone who looks that stupid is postively the one".
6. John bought a duplication of what from the James Bond film "Goldfinger"?

John's video collection contains every James Bond film made and he has even confessed that his fondness for the movie series is almost "to the point of obsession".
7. During the Duran Duran documentary "Sing Blue Silver", Simon dramtically asks for what accessory as if he were in a Shakespeare production?

The Wristband was the ultimate fashion accessory for the Brit Pop Bands of the 80's.
8. Roger's first concert was

In fact, Roger is a big Mowtown fan and saw the group in Birmingham at the age of ten.
9. Andy's father was a ...

Andy grew up in the small fishing village of Cullercoats. His family was so poor that they did not have indoor plumbing until Andy was a teenager. His father later became a carpenter.
10. Simon is married to model Yasmin LeBon (thus her last name), but what model was Simon engaged to in the 80's?

And she has also become an actress. Claire is best known as the character of the evil Alti on the hit TV series "Xena:Warrior Princess" and is also known as the Jersey Devil in the Sci-Fi phenomenon "The X-Files".
11. During the making of the video for "Hungry like the Wolf" a member of Duran Duran was urinated on by an elephant.

Actually, it was during filming of the "Save a Prayer" video.
12. Which job was NOT held by Simon before joining Duran Duran?


Answer: a dancing chicken for a Birmingham restaurant

But it is certainly fun to picture!
13. Which person below has never been a member of Duran Duran?

Martin was the lead vocalist for another Brit pop sensation, ABC.
14. John's daughter is named after what American city?

John's daughter Atlanta de Cadenet Taylor has often been seen at premieres with her mother, actress Amanda de Cadenet. Amanda is John's first wife. He is now married to Gela Nash, one-half of the fashion brains behind the designer clothing line Juice Couture.
15. Since its inception Duran Duran has sold over ______ million records worldwide. 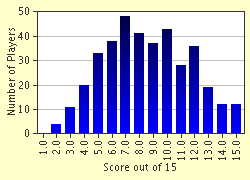 
Other Destinations
Explore Other Quizzes by katsdrama