Elvis Presley: Life and Times of the King Quiz

Come sway your hips and groove to the tunes of the "King of Rock and Roll". Ultimate Team's quiz about the life and times of Elvis Presley.

Quiz Answer Key and Fun Facts
1. Elvis had a twin brother who was stillborn. What was his name?

After Jesse Garon was stillborn, Elvis was born within minutes. The two were born on January 8, 1935.

Question created by team player JoeTrivia55.
2. Elvis was born in which town?

Elvis attended Milam Junior High, until his family moved to Memphis, Tennessee in 1948. They wanted to search for a better life.

Question created by team player JoeTrivia55.
3. How many times was Elvis married?

Question created by team player NiceGuy789.
4. Which year was Elvis inducted into the Country Music Hall of Fame?

In 1998, Elvis received Country Music Association's highest honor by being inducted into the Country Music Hall of Fame. Elvis had a huge impact on "opening the door" to young country singers in helping them to expose their music to a broader market of music.

Question created by team player NiceGuy789.
5. We all know that Elvis was also an accomplished actor as well as, the "King of Rock-n-Roll" music. Which film did he refuse to watch after his leading lady, Judy Tyler, died in a horrific automobile accident?

Judy and her husband took a vacation after filming, "Jailhouse Rock", released in 1957. During the vacation, a head on collision in Wyoming, ended both their lives. This movie included the most memorable scene of Elvis' movie career, which was his singing and dancing through the cell block. It's been credited as the prototype of the modern music video. Unfortunately, Elvis never watched it.

Question created by team player jogoholic.
6. Elvis received a guitar from his parents for his 11th birthday, paving the way to his fame. But he thought he was getting something else. What were the two items he thought he was going to receive?

Most Elvis experts say he was expecting to get a bicycle, but there are those that say he wanted a gun. Both very common gifts for a young boy growing up in Tupelo, Mississippi. It turns out his surprise gift of a guitar was, in the long run, a gift to all Elvis fans.

Question created by team player jogoholic.
7. Elvis received his first Grammy Award in 1967 for his performance of which song?


Answer: How Great Thou Art

He went on to win two more Grammy awards, both in the field of Inspirational Performances. Although nominated several times for his more popular music, he never won a Grammy for them.

Question created by team player jogoholic.
8. Elvis took a vacation from live performances from 1961 to 1968 to focus on making movies. Where was his live performance in March of 1961 held?

The concert took place in Bloch Arena, where he raised $62,000 for the USS Arizona Memorial Fund, which was bogged down due to low funding. The now famous war memorial was completed a year later. He also started filming "Blue Hawaii" soon after the show.

Elvis as well as other celebrities enjoy this sandwich. The Peanut Butter and Banana sandwich can be found at places like the Fool's Gold Loaf restaurant where Elvis ate. Question created by team player 3Xy147Bm.
10. Who did Elvis outbid to purchase Graceland?

The YMCA had offered $35,000 for Graceland a few days before Elvis had the opportunity to see it for himself. After he saw the property and baptized it with a few songs on the piano, he persuaded the sellers to accept his bid of $100,000. 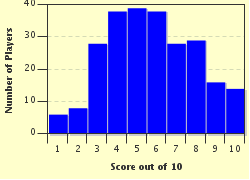 
Other Destinations
Explore Other Quizzes by 3Xy147Bm