Here are some pretty big hits, most from different eras, a lot from the 80s.

Quiz Answer Key and Fun Facts
1. From which song would you find the following lyrics: "There's one more kid that will never go to school, never get to fall in love, never get to be cool"?


Answer: Rockin' in the Free World

The album "Pyromania", which included "Photograph" was released by Def Leppard in 1987.
4. What famous Metallica song includes these words: "Say your prayers, little one, don't forget my son, to include everyone"?

"Not Listening" is on Papa Roach's album "Getting Away With Murder".
6. What's the name of the song? "So you think I got an evil mind, well I'll tell you honey, I don't know why."

"Breakin the Law" was released along with their big hit "You've Got Another Thing Coming" in 1983.
8. What famous song of the south includes these words? "Well I hope Neil Young will remember, a Southern man don't need him around anyhow."

"Sweet Home Alabama" is by Lynyrd Skynyrd. Jimmy Van Zant and Neil Young did not get along, so it was written into the band's hit.
9. This is a very well known 80s song. Which song/band is it? "Well it's all the same, only the names will change Everyday it seems we're wasting away. Another place where the faces are stone cold You drive all night just to get back home."

The song is "Blaze of Glory". The song was featured in the "Young Guns" movie starring Emilio Estevez.
Source: Author skin_artist888

This quiz was reviewed by FunTrivia editor agony before going online.
Any errors found in FunTrivia content are routinely corrected through our feedback system.
Most Recent Scores
Jan 25 2023 : Guest 24: 6/10
Jan 14 2023 : sw11: 10/10 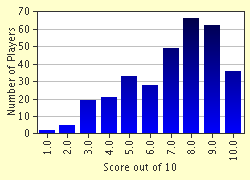 
Other Destinations
Explore Other Quizzes by skin_artist888