This is the first sequel to my Women Who ROCK quiz.

Share on Facebook
Share on Twitter
Share by E-Mail
Author
play_stairway
Time
5 mins
Type
Multiple Choice
Quiz #
100,034
Updated
Dec 03 21
# Qns
10
Difficulty
Difficult
Avg Score
5 / 10
Plays
531
This quiz has 2 formats: you can play it as a or as shown below.
Scroll down to the bottom for the answer key.

Quiz Answer Key and Fun Facts
1. Talent tends to run in the family. Which of these talented young women is Frank Sinatra's goddaughter?

Nikka Costa is Old Blue Eyes' goddaughter. Deena Martin is Dean Martin's granddaughter and an actress, not a singer.
2. Which band was Tonya Donnelly NOT a member?

The talented Miss Donelly began her career as a member of Throwing Muses with Kristen Hersh, moved on to the Breeders with former Pixie Kim Deal (and her sister Kelly). After she left the Breeders, Donnelly formed her own band Belly.
3. This group wants to start a dance craze called the "Shabammi!"

To find their album, "The Go-Go Music Show" go to CDBaby.com.
They have a retro 1960's girl garage band sound.
4. Before she sang about "My Sister," she was a member of the Lemonheads and the Blake Babies.

Angie Apparo is a guy, and Nina Persson is the front of everyone's favorite, the Cardigans. Juliana has also been the front of the Juliana Hatfield 3, in addition to a successful solo career.
5. Which girl-fronted group did NOT contribute members to American Hi-Fi?

American Hi-Fi is made up of former members of Letters to Cleo, Veruca Salt and Fig Dish, although there were never any girls in Fig Dish. Ivy also contributes members to Fountains of Wayne.
6. True or False: The Seether is Louise

You can hear for yourself on Veruca Salt's "Volcano Girls" from their "8 Arms to Hold You" album.
7. She sings about being "Unemployed in Summertime".

8. She created the soundtrack to "Magnolia."

Aimee Mann is married to Michael Penn (who is also a rocker, you may remember his song "No Myth"), brother of Sean Penn.
9. She does the vocals for the Josie and the Pussycats soundtrack.

It was Miss Kay Hanley, formerly of Letters to Cleo. Rachel did play her own guitar for the movie, though.
10. This artist's debut album is "Dirty Child."

Cherokee Bat and the Goat Guys is a book by Francesca Lia Block. Edie Brickell fronted New Bohemians and is married to Paul Simon, and Megan Giddings is not a singer. Rosey's album features such songs as "Love" and "Afterlife."

I hope you enjoyed this quiz.
Source: Author play_stairway 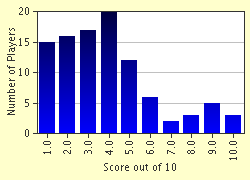 
Other Destinations
Explore Other Quizzes by play_stairway