This a quiz about the lyrics from the first three albums by New Jersey quintet My Chemical Romance.

Share on Facebook
Share on Twitter
Share by E-Mail
Author
xxkatiebxx
Time
4 mins
Type
Multiple Choice
Quiz #
314,763
Updated
Dec 03 21
# Qns
10
Difficulty
Average
Avg Score
7 / 10
Plays
651
This quiz has 2 formats: you can play it as a or as shown below.
Scroll down to the bottom for the answer key.

Quiz Answer Key and Fun Facts
1. Complete this lyric from 'House of Wolves' from the album 'The Black Parade': "Well, I know a thing about _____________, Because I got enough to spare. And I'll be granting your permission, 'Cause you haven't got a prayer."

My Chemical Romance consist of five members - Gerard Way (vocals), Mikey Way (bass), Bob Bryar (drums), Frank Iero and Ray Toro (both on guitar). Bob Bryar is not the original drummer - he replaced Matt Pelissier, who left in mysterious and unconfirmed circumstances.
2. In the song 'Give 'Em Hell, Kid', where has the singer taken a train from?

'Three Cheers For Sweet Revenge', the album on which 'Give 'Em Hell, Kid' appears, was the first to be released on Reprise Records. MCR's debut album, 'I Brought You My Bullets, You Brought Me Your Love', was released on Eyeball Records.
3. "Up and down escalators, pennies and colder fountains _________ and half price sales, trapped in by all these mountains." Which word is missing from this line, taken from the song 'Early Sunsets Over Monroeville'?

'Early Sunsets Over Monroeville' is one of only two songs on MCR's debut album that Frank Iero played guitar on, as he only became a member of the band during the recording stage. The other song he plays on is 'Honey, This Mirror Isn't Big Enough For The Two Of Us.'
4. According to 'Headfirst For Halos', what colour pill will make you fall?

My Chemical Romance was formed in 2001 after Gerard Way witnessed the attacks on the Twin Towers and decided to do something with his life. The song 'Skylines and Turnstiles', the first song to be written by MCR, is about the attacks on the Trade Centers.
5. In 'The End', what does the singer want to do when he grows up?


Answer: Nothing at all

'The Black Parade' was produced by Rob Cavallo, who has recorded other albums such as 'American Idiot' by Californian band Green Day.
6. What is the narrator's aunt called, according to 'Cancer'?

'The Black Parade', the third studio album by My Chemical Romance, follows the life of a character called The Patient, who dies of cancer at a tragically young age. The idea came to Gerard Way one night when he was dreaming and the phrase 'We are all just a black parade' came to him.
7. Complete this lyric from the song 'It's Not A Fashion Statement, It's A Deathwish': "Hip Hip Hooray for me, you talk to me, but would you kill me in my sleep Lay still like the dead From the razor to the rosary We could lose ourselves and paint these walls in _______ red"

Mikey Way, bassist and brother of singer Gerard, came up with the name 'My Chemical Romance'. He used to work in a Barnes and Noble, and was reading the blurbs of books, and the title of one ('Ecstasy - Three Tales Of Chemical Romance by Irvine Welsh) caught his eye. He added the 'My' to give it a twist.
8. Complete this whispered line from song 'Vampires Will Never Hurt You': "And as always, innocent like ____________"

Bob Bryar used to be soundman for rock band The Used before leaving to join My Chemical Romance. The Used and My Chemical Romance used to be extremely close, even recording a cover of 'Under Pressure' together for charity. However, Gerard Way and Bert McCraken (singer of The Used) fell out, though it has never been reported by either party why.
9. In the song 'To The End', what floor does the elevator only go up to?

'To The End' is also a song by British band Blur, and this is where Gerard Way got the title of 'To The End' from. 'To The End' is on MCR's second album, 'Three Cheers For Sweet Revenge'.
10. What is the missing word from this verse of 'Disenchanted'? "I spent my high school career Spit on and shoved to agree So I could watch all my heroes Sell __________ on tv Bring out the old guillotine We'll show 'em what we all mean."

'Disenchanted' was originally called 'Disenchanted (Shut Up and Play)', but when the majority of the lyrics were changed, so did the title. 'Disenchanted' appears on the album 'The Black Parade', which was released October 23rd in the UK and October 24th in the USA.
Source: Author xxkatiebxx 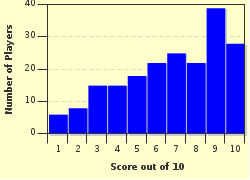 
Other Destinations
Explore Other Quizzes by xxkatiebxx