Nobody But The Stones Trivia Quiz

Quiz Answer Key and Fun Facts
1. The Stones originally signed with what recording label in 1963?

The Stones signed with Decca Records (later renamed Abkco) in May of 1963. Their first single, "Come On" was released in June of the same year. Their own label, Rolling Stones Records, was launched in 1971.
2. "Yeah, you got satin shoes. Yeah, you got plastic boots. Y'all got cocaine eyes. Yeah, you got speed freak jive." This is the opening stanza to what Stones' classic?


Answer: Can't You Hear Me Knocking

"Can't You Hear Me Knocking", off the "Sticky Fingers" album, originally released in 1971.
3. Which Stones' classic album includes the songs "Gimme Shelter", "You Can't Always Get What You Want", and "Live With Me"?

These three tunes are all on "Let It Bleed", originally released in 1969, and considered by many to be the Stones' best album. This amazing album also includes "Midnight Rambler", "Monkey Man", "You Got the Silver", and, of course, the title track.
4. "Silver train is a comin', think I'm gonna get on now, oh yeah. Silver train is a comin', think I wanna get on now, oh yeah." These lyrics are from a song off which Stones' album?

"Silver Train", from the album "Goat's Head Soup", originally released in 1973. "Goat's Head" also includes other Stones' classics such as "Angie", "Doo Doo Doo Doo Doo (Heartbreaker)", and "Dancing with Mr. D".
5. Which of these Stones' albums was NOT released during the decade of the 1980's?

In February of 1977, Royal Canadian Mounted Police arrested Keith and Anita Pallenberg for possession of heroin, cocaine and hashish. Keith faced up to life in prison for drug trafficking, but was sentenced to community service which included a benefit show for the Canadian National Institute for the Blind. "I never had a problem with drugs, only with cops." - Keith.
7. Which Stone was born first?

"Dandelion" was originally released in the U.S. as a single in August of 1967. It was later added to such compilations/greatest hits albums such as "Through the Past, Darkly" (1969) and "More Hot Rocks" (1972).
9. Which is the name of an early Stones' album?

Jefferson Airplane released "Surrealistic Pillow" in 1967. Black Sabbath released "Master of Reality" in 1971. Parliament Funkadelic released "Mothership Connection" in 1976. The Stones released "December's Children" in 1965, and included the Stones' classics "As Tears Go By", "Get Off Of My Cloud", and "(Get Your Kicks On) Route 66".
10. "My sweet girl was once his wife, and he had papers that the judge had signed. The wind blew hard; it was a stormy night. He shot me once, but I shot him twice." These lyrics are from which Stones' classic?

"Hand of Fate", from the album "Black and Blue", originally released in 1976. Wayne Perkins plays lead guitar on this song, which, in my opinion, is one of the Stones' all-time best.
11. Which musician never played piano and/or keyboards during the Stones' recording sessions?

The Stones have had the contributions of many piano and keyboard players over the years, including the three mentioned above, along with Ian Stewart, John Paul Jones, Benmont Tench, Brian Jones, Keith Richards, as well as several others.
12. "Get out of my life, don't take my wife, don't come back." These lyrics are from which Stones' classic tune?

Ronnie played Hell's Angel in "The Rutles". He played the Refrigerator Raider in "The Wild Life". He played the Bodyguard at the Gate in "Revenge of the Radioactive Reporter". Ronnie has also appeared in several episodes of "Magnum P.I."
14. "I was standing by the bridges where the dark water flows. I was talking to a stranger about times long ago." These lyrics are from what Stones' song?


Answer: Out of Control

"Out of Control", from the album "Bridges to Babylon", originally released in 1997. This song and album are also destined to be classics.
15. Which is NOT a name of one of Mick Jagger's daughters?

"Wild Horses", from the album "Sticky Fingers", originally released in 1971. Arguably the best ballad in rock history.
17. Three of the four Stones' classics listed mention New York City by name somewhere in the lyrics. Which one does not?

Although "Shattered" is obviously about New York City, it never actually mentions the city by name. It refers to Manhattan, the Big Apple, and 7th Avenue, but never says, "New York City". "Heartbreaker" and "Star Star" both mention New York City by name in the first stanza. "Hot Stuff" mentions it in the last stanza. All great tunes.
18. "But the gal in danger, yeah, the gal in chains. But she keep on pushin'. Would ya take her place?" These lyrics, penned by Mick Jagger, are a political commentary in support of what woman?

These lyrics are from "Sweet Black Angel", from the album "Exile on Main Street", originally released in 1972. Angela Davis was an African-American teacher, lecturer, and political activist. She was fired from her teaching position at UCLA, reportedly for her involvement in the Communist party and the Black Panthers.

She was arrested on charges of murder and kidnapping, and spent sixteen months in jail, until her acquittal on all charges in 1971.
19. What year did Darryl Jones first play on tour with the Stones as their bass player?

After the departure of Bill Wyman in 1992, Darryl Jones played bass on the recording sessions for "Voodoo Lounge". Jones then became the Stones' full-time bass player on the tour to support "Voodoo Lounge" which began in March of 1994.
20. Easy lyric time. "I was raised by a toothless, bearded hag. I was schooled with a strap right across by back". Which classic?

"Jumpin' Jack Flash, it's a gas, gas gas". Originally released as a single in 1968, JJF is probably the greatest live tune ever performed.
Source: Author miamisammy29 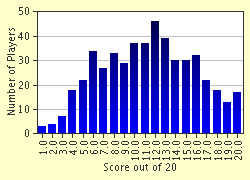 
Other Destinations
Explore Other Quizzes by miamisammy29