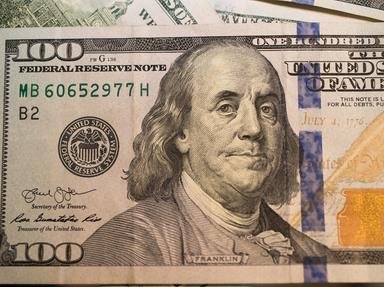 Everyone wants to be rich but for those of us that are not, here are some songs about money!

Quiz Answer Key and Fun Facts
1. Country legend, Willie Nelson, released a song called 'If You've Got The Money'. The song lyrics open with the title, but what is the next line?


Answer: Honey, I've got the time

Even non-country music fans (like me), recognise Willie's talent. He has been recording since 1956, and has had a string of successful albums and singles. In the mid 1980s, he joined up with fellow legends, Kris Kristofferson, Johnny Cash and Waylon Jennings, to form The Highwaymen.

He even has a street named after him in Austin, Texas.
2. Swedish super-group ABBA released 'Money, Money, Money' as a single in 1976. Which album was it originally on?

'Dancing Queen' and 'Knowing Me, Knowing You' also came from the same album. All three were Top Ten hits on almost every worldwide chart.
3. 'Money Makes the World Go Round' is a fun song from the 1972 musical 'Cabaret!' It features Liza Minelli in a duet with another performer. Who is this man, who won a Tony, an Oscar, a BAFTA, and a Golden Globe for his performance?

Liza also scooped the award pool for her role as Sally Bowles.

Bob Fosse directed the movie and Christopher Isherwood wrote the book that the original stageplay was adapted from. Peter Allen was her first husband.
4. 'Money' was a hit for a British band who were named after two American blues singers. Which band hit the jackpot with this song?

They named themselves after two American blues singers- Pink Anderson and Floyd Council. The Moody Blues were named after a beer company, M & B, King Crimson is allegedly a name for the devil, and diddley squat means nothing at all!
5. Dire Straits hit it big with the song 'Money for Nothing'. Which of their albums was it released from, in 1985?

'Brother in Arms' is the only album listed; the other options are all singles. The sultans of swing had their biggest hit with 'Money for Nothing', but not without some controversy. It was labelled as racist and sexist, but still won the 'Video of the Year' at the 1986 MTV awards.

Did you know that the man singing "I want my MTV" is none other than Sting, from the Police?
6. The single 'Money's Too Tight (to Mention)' was a minor hit for the Valentine Brothers in 1982, but which British band had much better luck when they covered it in 1985?

John and Billy Valentine wrote the song, but their version only just made the Top 50. Simply Red were rock and roll survivors, recording for over 25 years before splitting up in 2010. 'Fairground' was a smash hit for them and was also released in 1985.

Scottish glam rock band, the Bay City Rollers, recorded 'Money Honey' in 1975, and Culture Club did not have any songs about money, although they did wax lyrically about a chameleon.
7. 'Money (That's What I Want)' was released in 1963 off the album 'With the Beatles', but which one-hit wonder released it four years previously?

Barrett Strong hit paydirt with 'Money', but only achieved further success as a lyricist. He wrote a few biggies, such as 'Heard It Through the Grapevine', 'War (What is it Good For?)', and 'Papa Was a Rolling Stone'.

White did 'Poke Salad Annie', Newman released 'Something in the Air' and Dickens was another one hit wonder, with 'May the Bird of Paradise Fly Up Your Nose'.
8. Which 1970s disco diva had a huge hit in 1985 with 'She Works Hard for the Money'?

Summer had several hits in the disco era (roughly 1974-80), and when the bubble burst, she changed style to a more pop/blues feel. She continued working in music until her death, from cancer, in 2012.
9. Which song, from a band that did not really exist, was featured in the movie 'This is Spinal Tap'?


Answer: Give Me Some Money

'Spinal Tap' was a group invented for the movie, with three actors being dubbed in for the music. The movie itself is a sendup of the rock music touring scene, and it gained a cult following after its release in 1984.

'Did You Steal My Money?' was a 1981 song by The Who, 'Mo' Money, Mo' Problems' belongs to rap singer Notorious B.I.G. and 'The Colour of Money' was a Paul Newman movie about hustling at pool.
10. According to Cyndi Lauper's 1983 song, what does 'money change'?

The Brains (who?) released 'Money Changes Everything' in 1978 with little support, but Lauper's cover was much more of a success.
Source: Author ozzz2002 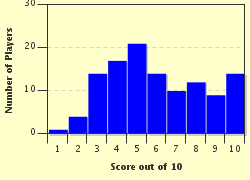 A few musical odds and sods, some good, some bad, and some downright ugly!