The Rolling Stones - "Some Girls" Quiz

"Some Girls" is often considered the last great album the Rolling Stones made. Here are ten questions about its songs and the events behind the music.

Quiz Answer Key and Fun Facts
1. Where did the Rolling Stones tour to promote the June 1978 release of "Some Girls?"

The Stones continued their pattern, going back to 1966, of touring the US every three years. They played indoor and outdoor US venues during June and July, ranging from 80,000-seat football stadiums to intimate clubs. Their 1978 tour is widely regarded as the worst US performances the band ever did.

The Stones lacked the imaginitive stage props used in their 1972 and 1975 tours, and the tight and professional musicianship shown in the 1980s and beyond. In most shows, they didn't even bother with an encore.
2. Why was the original cover for "Some Girls" quickly redone?


Answer: Because of its unauthorized use of pictures of several celebrities

The cover of the original vinyl record had 20 cutouts, which matched up with facial photos on the inner record sleeve. With the sleeve put inside the cover, these showed the members of the Stones, plus several female celebrities, in what appeared to be ads for wigs.

When several of these celebrities (Farrah Fawcett, Raquel Welch, Lucille Ball, plus the estates of Judy Garland and Marilyn Monroe) threatened a lawsuit, the cover was redone to take them out. The CD version of "Some Girls" uses drawings, none of them resembling celebrities, in the wig ads.
3. "Watched the taillights fading, there ain't a dry eye in the house," sang Keith Richards in "Before They Make Me Run." To what real-life event was he referring?


Answer: His upcoming heroin trafficking trial and its potential impact on his career

When the Stones played two concerts in Toronto in 1977, Richards was arrested at his hotel for possessing cocaine and an amount of heroin sufficient enough to qualify for charges of trafficking. Had Richards been convicted of this, he faced a jail sentence potentially long enough that "Some Girls" and their '78 tour might have been his last efforts with the band. As it turned out, the cocaine charge was dropped and the heroin one was reduced to a less-harsh one of possession. Richards received a probationary sentence and there was no impact on his music.

Ironically, many thought the group's 1978 tour would be their last one. That was a mere 15 years after their first record. Three decades later, the band was still recording, touring, and going strong.

"I've been walking Central Park, singin' after dark, people think I'm crazy," went the lyric, as Mick Jagger lamented the loss of his love, while accompanied by the thump of a disco beat. Two very different interpretations of the song are that Mick missed Bianca, his wife, as their marriage was deteriorating, or that he missed Jerry Hall, whom he'd just begun to date at the time the song was written. Released in May 1978, a month ahead of the album, "Miss You" became the Stones' first US #1 single since 1973's "Angie." It would also prove to be the band's final US #1 of the 20th century.
5. "When the Whip Comes Down" is a song about a young man hustling on the seamier streets of Manhattan. According to its lyrics, how does his mother feel?


Answer: Glad that he's not on the dole

"I'm filling a need, I'm plugging a hole, My mama's so glad I ain't on the dole," go the lyrics. Mick Jagger had spent much of the 1970s refining his musicianship, and the hard-driving "When the Whip Comes Down" was one of several "Some Girls" songs in which he joined Ron Wood and Keith Richards on guitar.
6. What was the name of the session musician who lent his sweet and colorful harmonica to some of the "Some Girls" songs?

James "Sugar Blue" Whiting, a harmonica player who'd met Mick Jagger in Paris, participated in the "Some Girls" recording sessions, playing on "Miss You" and the title song. "Rolling Stone" magazine said that he played "like a snake charmer." Four other songs with his harmonica, recorded at the time of "Some Girls," made it on to subsequent Stones albums.
7. "Just My Imagination (Running Away with Me)" was the only track from "Some Girls" not written by the Stones. What legendary group first performed the song?

"Just My Imagination (Running Away with Me)" was a #1 single for the Temptations, released shortly before the 1971 departure of founder Eddie Kendricks. The Stones version is rougher and slightly more up-tempo than the original. This was the second Temptations song to appear on a Rolling Stones album, after "Ain't Too Proud to Beg" on 1974's "It's Only Rock'n Roll."
8. Who was widely believed to be the subject of "Respectable?"

Mick and Bianca Jagger had married in 1971, but the marriage was under pressure from the outset because of Jagger's philandering ways, his wife's activism, and both of their involvements in night life and jet setting. Their relationship was heavily strained at the time of the "Some Girls" recording, and the song's biting lyrics (Jagger calls the song's subject "a rag trade girl" and "queen of porn" among other things) were often interpreted as his way of telling his wife that she owed her "pillar of society" standing to him.
9. What motivated the protagonist of the song "Far Away Eyes" to run 20 red lights?


Answer: Having the Lord by his side

The song tells of listening to a radio gospel show on a Sunday morning drive through Bakersfield. The radio preacher says "You always have the Lord by your side," and the singer comments "I was so pleased to be informed of this that I ran 20 red lights in his honor - thank you Jesus, thank you Lord."

"Rolling Stone" magazine called the song "condescending and silly," but it does have funny lyrics, and it's amusing to hear Mick sing an over-the-top country song.
10. The Rolling Stones performed eight of the ten songs from "Some Girls" during their 1978 tour, omitting "Before They Make Me Run" and which other song?

"This song may be a sexist and racist horror, but it's also terrifically funny" wrote "Rolling Stone" about the title track of "Some Girls." Woven over a mesmerizing harmonica line, it's a good song to listen to, but its lyrics (easily researched elsewhere and not noted here) weren't for the faint of heart.

It's easily one of the better songs on "Some Girls," but the group, which usually courted controversy rather than shying from it, waited 21 years until their 1999 US tour before ever performing the song "Some Girls" in concert.
Source: Author d2407 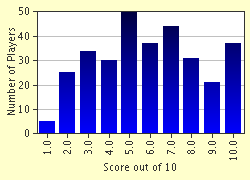