This quiz is all about the women who made a contribution to the Pre-Raphaelite art movement of the 19th century.

Share on Facebook
Share on Twitter
Share by E-Mail
Author
clarey29
Time
4 mins
Type
Multiple Choice
Quiz #
88,872
Updated
Dec 03 21
# Qns
10
Difficulty
Average
Avg Score
6 / 10
Plays
516
This quiz has 2 formats: you can play it as a or as shown below.
Scroll down to the bottom for the answer key.

Quiz Answer Key and Fun Facts
1. What did Elizabeth Siddal do before becoming an artist's model?


Answer: She worked in a milliners shop.

In Victorian times the areas in which a young lady could get a job were very limited. Elizabeth Siddal came from a tradesman family and worked as an assistant in a milliners shop (a very poorly paid job), where she was "discovered". By the time she met D.G. Rossetti in 1849 she was already an up and coming artist model.
2. Jane Burden, who married William Morris, was a skilled artisan - but in what field?

Jane Morris was a very skilled embroider. Along with her sister and daughters she created many of the tapestries produced by Morris & Co.
3. True or false? Elizabeth Siddal became an artist in her own right.

Elizabeth Siddal started her relationship with Rossetti through him teaching her how to paint. She eventually gave up modelling and took up painting full time, often working on pieces simultaneously with Rossetti on similar themes.
4. Throughout the time Elizabeth Siddal was connected with Rossetti, (the man whom she later married), she was afflicted with a mysterious illness. What is it now believed she suffered from?

Modern scholars now believe that Elizabeth Siddal was anorexic, a disease not recognised until modern times. Her "mysterious" illness was also exasperated by her later addiction to the opiate laudanum. She died in 1862 from an overdose of the drug.
5. Seven years after Elizabeth Siddal's tragic death, Rossetti did something shocking towards her. What did he do?


Answer: He exhumed her body to retrieve some poems he had buried with her.

In 1869 Rossetti was planning to publish a book of his poems when he remembered that he had buried the only copies of some of his best work in Elizabeth's grave, in Highgate cemetery. In order to get them back, he actually exhumed her body and removed the manuscripts from the coffin.
6. True or false? Maria Zambaco who was the mistress of Edward Burne-Jones, came from a poor Chelsea family.

Maria Zabaco came from a very wealthy Greek ex-pat family and was a trained sculptress. She was quite unusual for a Pre-Raphaelite model as most of them came from working class backgrounds. Many were literately "rescued" from poverty by the artists they modelled for.
7. Evelyn de Morgan used one of the original Pre-Raphaelite models for her painting "Hour Glass" in 1904. Who was it?

Evelyn de Morgan was the wife of William de Morgan and was a very accomplished artist towards the end of the Pre-Raphaelite movement. By 1904 Jane Morris was still a strikingly beautiful woman and the picture "Hour Glass" harkens back to a time twenty years before when Jane Morris was Rossetti's principle model.
8. Christina Rossetti is often considered to be the most talented member of her family. For what is she primarily known?


Answer: She was a poet.

Christina Rossetti was D.G. Rossetti's younger sister. She wrote the poem "Remember", and the words to the Christmas Carol "In the Bleak Mid-Winter". She is often considered to be the greatest poet the Pre-Raphaelite movement produced.
9. What medium did Julia Margaret Cameron use?

Julia Margaret Cameron was a skilled photographer, which at the time was a new medium for producing works of art. She often encouraged her friends and neighbours to dress up as characters for her to photograph. Many of her photos had Pre-Raphaelite themes such as the Arthurian legends.
10. True or false? In Edward Burne-Jones's series of paintings called "The Briar Rose", his daughter Margaret Burne-Jones was the model for sleeping beauty.

Margaret Burne-Jones can also be seen along with May Morris - the daughter of William and Jane Morris - in the painting "The Golden Stairs". May Morris herself often modelled for Rossetti and can be seen in the background of some of his most famous paintings such as "La Ghirlandata", where she appears as an angel.
Source: Author clarey29

This quiz was reviewed by FunTrivia editor thejazzkickazz before going online.
Any errors found in FunTrivia content are routinely corrected through our feedback system.
Most Recent Scores
Jan 28 2023 : Guest 106: 7/10
Dec 13 2022 : Guest 81: 7/10 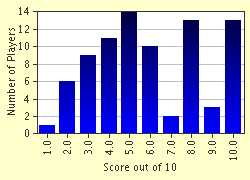 Related Quizzes
1. What Is the Painter's Name? Easier
2. The Personality Behind the Painting Tough
3. Who Painted This? Average
4. How Do I Look? Average
5. People In Art And Fashion Average
6. Artists Tough
7. The Eccentric Artist Average
8. Interesting 'A' People of Art Tough
9. Art History Behind The Scenes Difficult
10. Pictures of People Taking Pictures Average
11. Artistic Couples Difficult
12. Famous Photographers of History Tough


Other Destinations
Explore Other Quizzes by clarey29