Questions about women called Diana past and present

Quiz Answer Key and Fun Facts
1. As Diana, Princess of Wales, she was one of the world's most famous women. What was her family surname?

Swindon in Wiltshire - she is still its most famous child
3. One of the Mitford sisters, this Diana married which controversial political figure?

Her first husband was millionaire Bryan Guinness, then she married fascist leader Oswald Mosley. Hitler was a wedding guest.
4. Diana is the Roman goddess of the moon, hunting and chastity. What is her Greek equivalent?

5. Another Lady Diana was an actress and celebrity in the 1920s: what was her surname?

She starred in the silent movie 'the Miracle' and was married to Duff Cooper.
6. Singer Diana Ross was born in which city?

"The Avengers", cult 1960s spy series. Mrs Peel was the leather-clad high kicking heroine.
8. Diana Moran campaigns on breast cancer, but first came to fame as a breakfast TV fitness instructor. What was her nickname?

Green goddess because of her green outfit - also Green goddess was the name of the army fire engines in the new because of a civilian firemen's strike.
9. Before joining the House of Lords, Baroness Diana Maddock was elected as MP for Christchurch in an amazing by-election victory - for which party?

Christchurch was previously a safe Conservative seat, but the then Conservative government had just introduced an unpopular tax on heating fuel, and lost the election.
10. Back to the most famous Diana to finish. What was Diana, Princess of Wales' middle name? 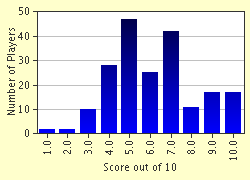 
Other Destinations
Explore Other Quizzes by bridget3