A mixture of Major League Baseball in all multiple choice, with some pictures that might help as clues. I hope you have fun with it. :)

Quiz Answer Key and Fun Facts
1. In the decade of the 2000s, no National League slugger won consecutive home run crowns. However, there was one player in the American League who banged his way to consecutive crowns. Which player was this?

Alex of the Yankees not only won two, but strung three consecutive home run titles together from 2001-2003, then won another in 2007. In 2010, A-Rod hit his 600th career home run, the seventh player in history to achieve the milestone.
Pictured is Alex himself during an All-Star Game.
2. Which Hall of Famer won the first-ever Rookie of the Year Award?

Robinson's number 42 was retired Major League wide in his honor for being the first African-American in modern day history to play in the big leagues. He won the rookie award in 1947, then won the National League MVP in 1949. Jackie played in only 10 seasons. He was inducted into the Hall of Fame in 1962, then died 10 years later.
3. The expansion team Arizona Diamondbacks won the World Series in only their fourth season in the big leagues. Which other team won it all in their fifth season?

The Florida Marlin franchise began in 1993 along with the Colorado Rockies. It only took until the 1997 season to find themselves in the promised land. They met the Cleveland Indians and won the series, four games to three. Marlins pitcher Livan Hernandez was the series MVP.
Pictured is an American Motors Corporation (AMC) Marlin.
4. Who was the first player in Major League history to have 200 hits in a season, 10 times in his career?

He also won the Rookie of the Year in 1963. Pete was later banned from baseball for gambling on baseball, then later admitted to it. Suzuki of the Mariners matched Rose's 10th 200-hit season in 2010, but Ichiro did his all consecutive. Ty Cobb had nine 200-hit seasons all with the Tigers. Joe Jackson had only four 200-hit seasons, and was banned from baseball in 1920 after the Black Sox Scandal of 1919. Fans would never know what might have been.
5. "Modern day baseball" began in 1920 with almost a total restructure of the rules of baseball. Who was the first modern day player to hit .400 three times?

Lou Piniella was a player of 18 seasons, retiring in 1984. He took the reins of the Yankees from 1986-1988, then had the Cincinnati Reds in his fourth season in 1990. He and the Reds won the World Series against the Athletics in that season. Lou managed in 23 seasons. Cox managed in four seasons for the Blue Jays, then the Braves for another 29.

In his 14th season, he took the Braves to his only World Series Championship in 1995. Torre began his managerial career with the 1977 Mets. It would be 14 seasons later when he found his first World Series crown in 1996 with the Yankees. Joe would win six American League pennants with the Yankees, including four World Series. Gene Mauch never took a team to the World Series in his 26 seasons.
7. This Major Leaguer played for two teams over his 19-season career. He won seven batting titles with one team, then as soon as he was traded, the batting crowns stopped. Who is this Hall of Famer?

Carew was a Minnesota Twin from 1967-1978, winning the Rookie of the Year Award along with the 1977 American League MVP. Prior to the 1979 season, the Twins traded Rod to the California Angels for Dave Engle, Paul Hartzell, Brad Havens, and Ken Landreaux. Carew was not happy with the compromising loyalty, and he lost much interest in baseball. He played for another seven seasons with the Angels, never winning a batting title again.
The photo is of a young man with his fishing rod dangled out over the bank of a river.
8. In 2010, at the top of the heap were the San Francisco Giants and Texas Rangers who met in the World Series. At the other end of the spectrum was which team that had the worst season record in Major League Baseball?

While the Pirates watched the Giants win the World Series against the Rangers four games to one, they had to be sorrowful with their display of a 57-105 season record. Their record was eight games worse than the second-worse NL team, the Arizona Diamondbacks. The Pirates did not have one starter who batted .300, or had one pitcher win in double-figures. The Rays won the AL East with a 96-66 record.
Pictured is a Pirate.
9. In the National League in the 1970s, two players won consecutive home run titles. Who was the only American League player to win consecutive crowns in the decade?

Mike Schmidt of the Phillies won three consecutive while George Foster of the Reds won two. Rice played his entire career with the Boston Red Sox from 1974-1989. He won consecutive home run titles in 1977 and 1978, and won the American League MVP in the latter season.
The photo is of a young lady working in the rice fields in Southeast Asia.
10. During the 1960s, the New York Yankees had a tremendous season in 1961, winning 109 games. Which other team in the decade also won 109 games in a season?

The 1961 Yankees weren't the greatest team in baseball history, but did have the "M&M Boys", Mickey Mantle and Roger Maris, in addition to pitcher Whitey Ford on the roster. They defeated the Reds in that World Series four games to one. The 1969 Baltimore Orioles were led by the bats of Boog Powell and Frank Robinson, and the arms of Mike Cuellar and Dave McNally.

They took their 109-53 record to the World Series against the Mets, and lost four games to one.
Source: Author Nightmare 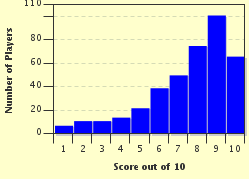