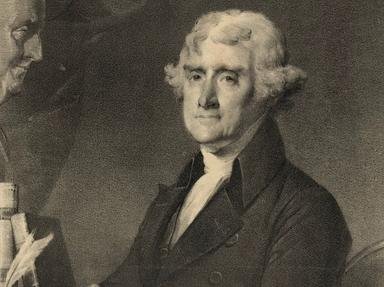 I have been reading Jon Meacham's excellent book on Thomas Jefferson, which provides an insightful look into this complex man. This is the second quiz I have written on Jefferson. We will take up his story as he runs for President in 1800.

Share on Facebook
Share on Twitter
Share by E-Mail
Author
MicjealS
Time
8 mins
Type
Multiple Choice
Quiz #
356,337
Updated
Dec 03 21
# Qns
10
Difficulty
Tough
Avg Score
5 / 10
Plays
265
This quiz has 2 formats: you can play it as a or as shown below.
Scroll down to the bottom for the answer key.

Quiz Answer Key and Fun Facts
1. We have seen some strong negative claims made against US presidential candidates. Our first real competitive campaign was the election of 1800. What rather remarkable negative claim was made about Jefferson by supporters of John Adams?


Answer: That Jefferson had died

Well, no point voting for a guy if he is dead. This seemingly silly tactic might look a little more effective when one thinks of the state of communications of the time. Jefferson couldn't send out a twitter message or appear on the evening TV news holding today's New York Times.

Other more serious slights were that he was an atheist and that he had disrespected the revered General Washington. Both claims had something behind them. Jefferson was a free thinker regarding religion and did not blindly accept any individual creed.

While he greatly respected and admired Washington, he was also critical of Washington's support of some of Adams' policies. Letters citing his views on this were published out of context by his enemies.
2. The election of 1800 was one of the wildest ones in American history; perhaps that is not surprising as we had not had a contested presidential election before. Among the many odd things that happened, which of the following actually did occur?

Jefferson and Hamilton had very different views about what the American government should be. Hamilton felt the public was ill-suited to making decisions on important matters, while Jefferson was committed to a government of the people. Adams was certainly much closer to Hamilton in his thinking than toward Jefferson's ideals.

However, apparently Adams was not sufficiently extreme in his views and Hamilton actively campaigned against him, bleeding the support he needed.
3. If you retain some of your high school history, you may recall that the US election of 1800 was initially a tie in the electoral college. How was this finally resolved?


Answer: It was decided by a vote in the House of Representatives

At this time the President and Vice-President ran separately and each electoral college elector had two votes. The plan was to withhold one vote for the vice-president and thereby indicate the preference for president. The Republicans got their wires crossed and the results were 73 votes for Jefferson, 73 for Aaron Burr, 65 for John Adams, and 64 for Charles Pinckney.

The Federalist ticket of Adams and Pinckney were clearly defeated but the result left no winner. By the Constitution the issue was given to the House of Representatives.

While the will of the people was clear the politics got ugly. The Federalists were viscerally opposed to Jefferson. On several occasions they sought concessions from Jefferson on future policy to gain their support to break the impasse. Jefferson rejected all of these.

It took over six weeks and thirty-six pollings in the House, but finally, on 17 February 1801, Jefferson was elected.
4. Once safely in office, how did Jefferson set about correcting what he saw as the errors of the previous administration?


Answer: He worked quietly, but relentlessly, behind the scenes to replace and overturn policies that in his view worked against the democratic principles of the Constitution

Jefferson was a master in the art of the deal and what today we might call political schmoozing. He was also patient and kept his eye on the long term goal. He knew he could not move faster than the nation would let him. He also kept up a stream of correspondence and private dinners where he would listen, offer observations, and make suggestions, all behind the scenes.

In this he brought about a major change in the direction of the Federal government securing for all time the accountability of government to the people.
5. One of Jefferson's major accomplishments was the Louisiana Purchase, which more than doubled the size of the United States. There were a number of events that together helped to make this happen. What were they?


Answer: Spain gave the territory to France, the U.S. was concerned about French control of New Orleans and sought to buy the city from the French, Napoleon did not want to bother with a North American territory and needed money so he offered all of Louisiana

The Spanish star was descending on the world stage. In the third treaty of San Ildefonso they gave France the lands they claimed north of Mexico in exchange for some territorial advantages in Europe. It also fed the hungry tiger next door, at least for now. Having the active and aggressive French at their western border was very troubling to the Americans.

The focus of this concern was the port of New Orleans. A full three-eighths of America's commerce came downs the Ohio and Mississippi rivers and through New Orleans. Jefferson dispatched a high level team to Paris to try to buy the city. To their surprise Napoleon offered not just New Orleans but all of the Louisiana territory to them.

He was preparing himself for expansions within Europe, so did not need North American distractions and could use some ready cash.

The price was $15 million or about three cents per acre.
6. In the election of 1800, Jefferson won but faced a starkly divided nation. In the next four years he worked slowly but steadily to transform the U.S. government. By the next election in 1804 the results of his efforts could be seen. What were they?


Answer: He had been extremely successful and was highly popular

Jefferson's quiet, careful rebuilding of the government was very successful. Even with the bumps and jolts of the messy business of democracy he repaired much of the excesses of Adam's administration. The Louisiana Purchase and his lowering of taxes made him a very popular figure.

In 1800 he got 73 electoral votes to Adams' 65. In 1804 he got 162 votes to the Federalist candidate Pinckney who had only 14 votes.
7. Jefferson was a great believer in the limits of executive power. However, there were two occasions were he took a strong position that set long lasting precedence on Presidential authority. What were these?


Answer: He refused to accept a subpoena to appear in a court and ordered military expenditures without Congressional approval

Aaron Burr's life had taken some rather dark turns. After he killed Alexander Hamilton in a duel his political future was limited. In order to reclaim some of his former glory he took to traveling about the Western states speaking of rebellion and separation from the US. When this got too bold he was arrested. The court prosecuting him called on Jefferson with a subpoena to testify in the court. While Jefferson sorely wanted justice done on his former Vice-President, he felt the larger principle of the Executive Branch not being subservient to the Judicial Branch more important and politely but firmly declined. There was insufficient evidence against Burr, but despite being found innocent he ceased to be a political force.

The British Navy had been taking an increasingly high handed approach to US shipping, stopping its vessels and removing sailors they claimed as deserted British sailors, and even firing on US vessels who would not comply. War was a real possibility and the US was in no way ready to mount an effective military force. Jefferson ordered a series of measures to improve US military preparedness and left Congress to catch up with him.

Strictly, by the book, he had the authority to do neither of these things. However, he felt there were larger considerations in each case and allowed his pragmatic sense overcome the slavish devotion to the letter of law.
8. Jefferson's second term was a difficult time. What was the very unpopular step he took?


Answer: He established an embargo of trade with Great Britain

The situation with Great Britain was becoming intolerable. As Jefferson saw it there were three options: submit, embargo, or war. To submit was unacceptable. To go to war with the US's weak military capability was unwise, perhaps even foolish. Embargo, while hardly a good choice, was the best of the bad. It gave the US time to enhance its military strength and gave Great Britain time to change their behavior. However, it also caused a lot of extreme economic hardship leading to a strong public dissatisfaction directed at him.

However, while unpopular, it did buy time. It was not until 1812 that open war was declared and while hardly a stunning victory for the American forces, neither were they overcome by a vastly superior force which might have been the outcome four years earlier.
9. While Jefferson did not run in the election of 1808, his hand-picked candidate James Madison ran as the "Jeffersonian" candidate. Therefore, Madison's performance in the election can be seen at least in part as a public assessment of Jefferson's span in office. How did he do?


Answer: Nearly as well as Jefferson in 1804

The vote was 122 for Madison to 47 for Pinckney. Not as commanding as Jefferson's 1804 win but in the context of the very unpopular embargo it was a strong endorsement of Jefferson.
10. Once allies and friends, John Adams and Thomas Jefferson found themselves separated by different visions for the young US nation. As the figure heads of their parties in the election of 1800, their supporters instigated an extremely negative campaign between the two opponents. This poisonous atmosphere separated the former friends. After Jefferson left office, what became of their relationship?


Answer: While still disagreeing on politics they rekindled their previous warm personal friendship

I not sure where I got the idea that both men were bitter enemies to the end but I was glad that Meacham's book could correct that view. In 1811 a mutual friend encouraged the two of them to "make up". This started a series of increasingly friendly letters.

While they did not agree on their old political differences, without the vitriol of their ardent supporters the two men could rekindle their respect and affection for one another. From the time of their reconnection in 1811 to their deaths in 1826 they exchanged over a hundred letters.
Source: Author MicjealS

This quiz was reviewed by FunTrivia editor stedman before going online.
Any errors found in FunTrivia content are routinely corrected through our feedback system.
Most Recent Scores
Jan 04 2023 : Guest 162: 7/10
Dec 16 2022 : dmaxst: 3/10 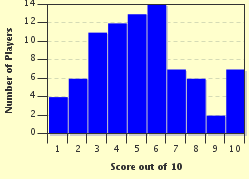 
Other Destinations
Explore Other Quizzes by MicjealS