The bean is one of the most prevalent crops in the world. Being called a bean is sometimes a misnomer as many beans are actually seeds. Beans are used for many things. Use your bean and see how well you can do on this quiz.

Quiz Answer Key and Fun Facts
1. What deadly poison can be made using the castor bean?

The castor bean is actually the seed of the castor oil plant. It has been used as a fuel, a cosmetic and for medicinal purposes. The castor bean contains a toxin known as ricin and can be fatal if the seeds are ingested orally. Purified ricin derived from the castor bean is much more toxic and has been used as a biochemical weapon for over 50 years.
2. Green beans originated in Scotland where they were eaten raw for centuries, in the belief that they increased fertility in women and virility in men.

This is completely false. The green bean originated in South America and was not brought to Europe until 16th century. This common bean has many names including pole beans, snap beans, and string beans. They are high in Vitamin K, manganese, folate, fiber, and vitamin B2. They can be steamed, baked, boiled, and even fried.
3. One of the most useful and healthy beans on the planet is which legume, also known as edamame?

Edamame have such high levels of protein that they are often referred to "the meat of the field". Also known as soya beans, this legume is very low in calories while being very high in many vitamins and minerals. There are claims that soy beans fight cancer and diabetes, lower cholesterol and can help the average person to lose weight.
4. Which common bean is usually used in the dish known as succotash?

The traditional Native American dish known as succotash uses Lima beans and corn as the main ingredients. The Lima bean derives its name from the South American city Lima, Peru which is located in the geographic area that Lima beans are believed to have originated. Lima beans are also known as butter beans and do not have as long a shelf life as many other types of beans.
5. Pinto beans are a popular bean known for being high in which of the following nutrients?

Pinto beans are one of the most popular beans in America. This widely grown bean is usually pale pinkish brown with darker speckles. It has the most fiber of all edible beans and is easy to grow. It is named after the similarly speckled pinto pony.
6. The popular kidney bean is named after the Kiddnee River in Bhutan.

This statement is completely false. There is no Kiddnee River in Bhutan. The kidney bean derives its name from its similarity in color and shape to the human kidney. Kidney beans are high in both iron and fiber, while being low in calories and fat. Many people are unaware that undercooking kidney beans can cause a toxic reaction.

This reaction is often seen in kidney beans that were cooked in slow cookers or crock pots which do not reach temperatures that are high enough to destroy the glycoprotein lectin.

Although not usually fatal, severe stomach distress occurs and hospitalization is not unusual.
7. Known as chickpeas in many parts of the world, which of the following is an alternative name for this popular bean?

Also known as the garbanzo bean, chickpeas are a healthy addition to any diet.
This round, usually beige, member of the legume family is popular in Mediterranean regions, and parts of south-western Asia. They are commonly used in the dish known as three bean salad and are ground up to make the popular Middle Eastern dish known as hummus. Chickpeas are often more digestible than other types of beans and are a good choice for those who suffer from excess gas after eating other members of the bean family.
8. Which of these common beans is commonly used for making the bean sprouts used in Chinese cooking?

Mung beans are small roundish green colored beans. They can be eaten in many different ways and are very popular in southern and western areas of Asia. When they sprout they are known as bean sprouts. Mung beans are one of the easiest beans on the digestive tract and are a good choice for those who often suffer from gas when they eat beans.
9. What popular bean is used to make mole, a popular Mexican sauce used in a variety of dishes?

The wonderful cocoa bean, better known for making chocolate, is also used to make a variety of Mexican sauces known as mole. The ancient Olmec civilization is thought to have been the first to grow this bean as a food crop even though later civilizations, such as the Aztec and Maya, made it a central part of their lives. Like many other beans mentioned in this quiz, the cocoa bean is not a real bean, but is, in fact, the seed of the cocoa tree.
10. Arabica and robusto are the two most commonly grown types of which "bean"?

Certainly one of the most popular beans in the world is the coffee bean. Although not generally consumed as a food, this seed of the coffee plant is one of the most important exports in the world for many countries. Although many people mistakenly think that coffee originated in South America, most historians agree they actually originated in either Ethiopia or the Arabian peninsula.
Source: Author dcpddc478 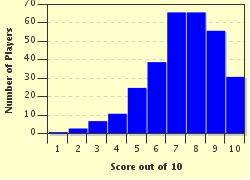