For a simple chemical compound, salt has many culinary uses, and tremendous cultural significance. So how much do you know about salt?

Quiz Answer Key and Fun Facts
1. Which of these is NOT a common source of salt?

Where the salt in your kitchen comes from depends largely on where you live. In New Zealand, most of our table salt is sea salt from Lake Grassmere near Marlborough where it is produced by evaporating seawater. In the US most table salt is actually rock salt - salt from underground salt deposits, the remains of ancient seas, or from salt lakes.
2. In the supermarket, I saw a packet of salt labelled "organic salt". What is odd about this label?


Answer: Salt is an inorganic compound

Salt is a natural substance, and one you can't survive without. Your body needs salt - it's why we crave salty foods - but many of us ingest more than we need, and that is harmful. That said, salt is chemically an inorganic compound. Those who put "organic salt" on the label are trying to convince you that their salt is more "naturally produced" and "less refined". The truth is that raw sea salt can be bitter to the taste due to the magnesium and calcium salts it contains. Furthermore, the most important additive to salt is iodine - and you need that iodine for healthy thyroid function.
3. What is the actual shape of salt crystals?

Okay, so not really much to do with the culinary uses of salt. But it's a fun and instructive experiment. Boil some water (hot tap water is not hot enough). Then dissolve as much salt into it as you can. Pour it into a shallow dish, and leave it to slowly evaporate. After a few days, you should get little cubes of salt as much as 2mm on a side. This cubic structure results from the sodium and chloride ions, which make up salt, fitting together in a neat alternating pattern.
4. "Kosher salt" is a coarse-grained salt often recommended by American chefs - how did it get its name?


Answer: It is used in the process of "koshering" meat

Coarse-grained salt does not dissolve as quickly and is consequently remains on the surface of meat longer, extracting more blood from meat - a requirement in koshering the meat so orthodox Jews may eat it. It also conveys more salt flavour when used on food for much the same reason. However, kosher salt should not be used in baked goods where little liquid is used, simply because it won't dissolve. I like to use coarse-grained salt (called "rock salt" where I live although it is in fact sea salt) in my salt grinder - and I'm careful to make sure that it is iodised.
5. "Fleur de sel" is a finely flaked sea salt. Where does genuine "fleur de sel" come from?

"Fleur de sel" means "flower of salt" in French. According to Rick Stein, it is called that because of it smells of violets as the water evaporates. It is harvested by hand from the top layer of salt on large salt pans, off the coast of Brittany, and is consequently very expensive.

However, other flaky sea salts are traditionally produced in the Algarve region of Portugal (called "flor de sal"), in Maldon in Essex in England, and in Cyprus. "Marlborough flaky sea salt" from New Zealand is a similar, but more recently developed product.

These flaky sea salts are very delicate and dissolve very quickly, so are usually sprinkled directly onto food, just before eating it.
6. "Alaea salt" is an unrefined sea salt from Hawaii. What colour is this unusual salt?

This salt contains impurities caused by Hawaiian clay, called "alaea", that give it its pinkish colour. It is used traditionally in a number of tradition Hawaiian dishes, and has become quite trendy. However, it is can have an unpleasant sulphurous odour, and isn't to every taste.
7. Which of these products is NOT traditionally preserved using salt?

Lemons pickled in brine are used in North African cuisine. Salted beef is more commonly known as corned beef. Salted pork gives us ham and bacon... but salted apples?
8. Bacalhau is a Portuguese word for a product preserved with salt. What is bacalhau?

Salt cod is common on both sides of the Atlantic. Before the advent of refrigeration, salting was the main method of preserving fish, and many recipes for using salted fish were developed.
9. In southern Italy you might come across a menu featuring "Pesce in crosta di sale". You know that "Pesce" means fish... but how has it been cooked?


Answer: Baked in a salt crust

Baking fish in a salt crust keeps the fish moist - and the cooked fish is not as salty as you might think. This method is traditional across southern Europe, not just in Italy.
10. I mixed together a cup of flour, half a cup of salt, a tablespoon of cooking oil, and a teaspoon of cream of tartar in a bowl. I added a cup of boiling water, and after mixing it together with a wooden spoon, kneaded it until it was soft and pliable. What was I making?

I couldn't do a quiz on salt without sharing one of the most useful "salt" recipes I know! You can colour the play dough by adding a teaspoon of food colouring with the water. This salt dough is not especially edible because of the high salt content, but if the children do eat a bit, it won't hurt them.

The salt dough can be baked and then painted and varnished - so it's a useful craft material, and not just for kids. Salt dough has its culinary uses too - it is used in most modern versions to replace the clay used in the traditional Chinese recipe, "Beggar's Chicken" - a whole chicken baked in salt dough.
Source: Author Flamis 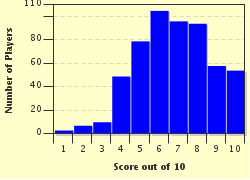 
Other Destinations
Explore Other Quizzes by Flamis