This Will Make Your Mouth Water! Quiz

Here are ten questions about everyone's favorite type of food...dessert! Let's see if we can make your mouth start watering by the time you are done.

Quiz Answer Key and Fun Facts
1. To which one of the following restaurants would you go to if you had a craving for apple empanadas?

Of these choices you would go to a Mexican restaurant. Although other fruits may be used is this fried or baked pastry, apples are the most common. The uncooked pastry dough is filled with a spiced apple filling that is somewhat similar to that which is used in apple pies in the U.S. The empanadas are then fried (usually) and served warm.
2. There is a Polish tradition that states that if you do not eat one of these sweet treats on the holiday known as "Fat Tuesday" you will have a year of bad luck?

Fat Tuesday is the Tuesday before Ash Wednesday and on this holiday it has been estimate that over 100 million Paczki are eaten. This spongy yeast cake is filled with fruit preserves, sweetened curd cheese or chocolate and then deep fried until golden brown.

While they are associated with the holiday, they are eaten all year around and are one of the most popular dessert treats in Poland.
3. Parkin is a yummy soft cake popular in which of the following countries?

Parkin is a molasses and oatmeal cake that has been eaten in parts of northern England for centuries. The main ingredients in this delicious treat are simply oatmeal, flour, molasses and lard. This is a very moist cake and is usually served without frosting or icing. It is eaten year around but is often associated with Bonfire Night which occurs on November 5th.
4. To which city would you have to travel if you wanted to visit the Jell-O museum?

Opened in 1997, the Jell-O Museum is located in Leroy, New York. It has many displays and memorabilia from the early years of Jell-O. You can see old molds, cookbooks and unopened boxes of Jell-O that are over 100 years old.
5. Which one of these fruits is usually not found in a mincemeat pie?

There are many recipes for mincemeat and many ways to serve it, including as a pie. Most recipes call for apples, raisins, currants, and candied lemon or orange peel. Bananas are not usually found in mincemeat. Other ingredients that may be found include venison, beef suet, brandy, vinegar and a variety of spices. This is an old dessert that you will either love or hate.
6. Douhua is a Chinese pudding-like dessert that is made with which of the following ingredients?

Douhua is a pudding-like dessert that is made with tofu. There are many varieties but all contain tofu which has been an important part of Chinese cuisine for many years. Some douhua has the texture of a dessert soup while other recipes result in a very thick custard texture. Ingredients used for sweetening include tapioca, almonds, sugar syrup, and coconut milk.
7. Key lime pie is a specialty of which of the following countries?

Key lime pie is an American dessert that derives its name from the small key limes that are used in the preparation of the pie. These special limes are found in the Florida Keys, a string of islands that sweep off the bottom of the state. This tart pie is made with egg yolks, lime juice, and sweetened condensed milk.

The original recipe called for a meringue topping but it is also often served with a whipped cream topping.
8. Which of these countries is the origin of the yummy dessert known as Pavlova attributed to (there is a second option not listed here)?

Although there is some disagreement as to whether this dessert was first created in New Zealand or Australia most scholars now attribute the dessert to New Zealand. This meringue style dessert was named in honour of the Russian ballerina Anna Pavlova around 1926. This dessert includes soft fruits, whipped cream and sometimes chocolate or caramel as well as the crispy meringue.
9. Recipes for the delicious dessert known as tiramisu often contain coffee or espresso.

Tiramisu is a type of Italian dessert that involves layers cake, lady-fingers which have been soaked in coffee or espresso, egg yolks, mascarpone cheese, and occasionally a sweet liqueur. These different ingredients are layered into a dessert that will make your mouth water. As with most recipes, there are cultural variations.
10. No dessert quiz would be complete without a question about chocolate. If I wanted to make a chocolate cake, from which continent would my chocolate's raw cocoa most likely come from?

The continent of Africa produces almost twice as much cocoa as South America, the next runner up. Chocolate from Africa tends to be darker and is grown in West Africa where it is then exported to Europe and North America, the two largest consumers of this delicious treat.
Source: Author dcpddc478 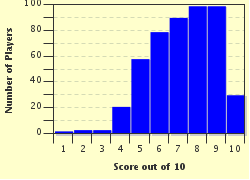