What is "Soy" Anyway? Trivia Quiz

You have probably heard vegetarians use this word and have most likely eaten products containing it as well. This quiz is mostly about soy as a replacement for food, but it has several other uses as well.

Quiz Answer Key and Fun Facts
1. During the first decade of the 2000s, which country was the top importer of soybeans?

China is by a large margin the worldwide number 1 at importing soybeans. They import 490 million bushels of US Soybeans used for human and animal consumption. China also imports 171,000 metric tons of soy oil which is used as cooking oil and for other food uses.
2. What is the component found in soy that has been said to reduce the risk of cancer in humans?

There have been many advances in health with the onset of a soy diet, but this one has raised a few heads. Tofu and soy are rich in isoflavones, both of which can be found in organic foods.
There are many substances in soy and it can definitely become quite confusing.
3. Quorn is a company that specializes in making meatless products taste as "close to the real thing" as possible. Which of the following is the base of most Quorn foods?

To be more exact, Quorn products are made with mycoprotein, which is a fungus. These are meat-free products and a good place to find them would be a supermarket like Whole Foods. They are not for vegans though, as there are egg whites in some of their products. Since the advent of soy, there are many products that have been substituted for meat. Quorn is famous for their chicken patties, chicken nuggets, and chicken cutlets.
4. Soy, in its most natural form is simply ___________?

Soybeans are where all these soy products owe their origin. They are from the Orient, originally. Americans were and are resistant to change, especially when it comes to a staple such as food and have been slow to accept soy. They are now cultivated in the United States.
5. What condiment that you might find in an American Chinese restaurant is soy most noted for?

Soy sauce is still the most recognizable soy product that is used but many other products are catching up. More people are eating soy than ever before.
6. What are some of the dangers of a diet of soy?

Phytates or phytic acid are prevalent in soy and have been known to block the uptake of essential minerals like zinc and calcium. It also contains trypsin, which in large amounts has led to pancreatic cancer. As with anything in life, do not go into a strict diet change unprepared. If you are planning on becoming a vegetarian or are looking into adding a lot of soy into your diet, make sure you know what is being put into your body and what isn't getting in. Nutrition information is free and easy to obtain these days and many supplements can help prevent any or all of these concerns from becoming a reality.
7. What coffee shop helped to popularize soy because the long and trendy names of the drinks included soy and could be heard when called into the back? Examples are the Soy Caramel Macchiato, the Soy Latte, and the Soy Mocha Frappuccino.

When you replace whole milk in a drink at Starbucks, that is the first part of the drink that the barista calls out, with one exception. If the drink is to be put over ice, then "ice" is called out first. I would know because I worked there for a brief stint.

Many times, people would order soy in their drinks and not know why when I asked them. It just became a trend and became popular that way.
8. Soy can shrink your fat cells and can therefore be looked at as a weight-loss product.

What soy does, in effect, is increase your fat cells' metabolism rate, and therefore increase the burning of fat and shrinking of your fat cells. Of course, this is only accurate if you are also following a healthy diet and maintaining an exercise program of some kind, as well.
9. If you were to cook soybeans and then ferment them into a paste, you would have a product known as what?

This paste has several beneficial uses. For one, it contains a large number of probiotics and beneficial bacteria that are helpful to the intestinal tract. Miso is used in soups and several condiments.
10. What is a good way to avoid "genetically manipulated" soy products in the USA?


Answer: Make sure it says "organic" on the label

Anything that is labeled "organic" is not genetically engineered nor has it been treated with synthetic herbicides. This is important because once genetic engineering takes place, the chemical makeup of the soy is changed. This can have effects on your body in the long term.
Source: Author superferd 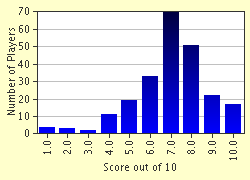