Hannah and her Sisters Trivia Quiz

This is my second quiz on Woody Allen movies; think I might be from New York? Have fun with this one.

Share on Facebook
Share on Twitter
Share by E-Mail
Author
rootsgrrl
Time
4 mins
Type
Multiple Choice
Quiz #
90,240
Updated
Dec 03 21
# Qns
10
Difficulty
Tough
Avg Score
6 / 10
Plays
497
This quiz has 2 formats: you can play it as a or as shown below.
Scroll down to the bottom for the answer key.

Quiz Answer Key and Fun Facts
1. There are three sisters: Hannah, Holly and who?

Stephanie and Prudence are two of Mia Farrow's sisters. Cecelia is the name of the character she played in "The Purple Rose of Cairo".
2. Who won an Academy Award for playing Holly?

Again, more references to other Allen films: Alvy was Woody's name in "Annie Hall." Tony was another character in that film. Judah was one of the main characters in "Crimes and Misdemeanors."
4. Which holiday do we see celebrated three times in the movie?

Three dinners that could only be made in the movies.
5. Who makes a brief appearance as a rock star interested in buying art?

Simon and Cusack have both been in other Allen films. I just like Jon Bon Jovi.
6. What famous New York hotel's nightclub does Woody's character take Holly to on a date?

Before that, she drags him to CBGB!
7. Which stunning legendary actress plays the mother of the sisters?

This is a no-brainer: Miss O'Sullivan was in fact Mia Farrow's real-life Mom.
8. Which "Saturday Night Live" alumnus plays a member of the Allen character's staff?

Julia Louis-Dreyfus was on "Saturday Night Live" for three seasons (1982-84).
9. Holly and her friend April have a catering business, what's its name?

They are both actresses, hence the name. Method was the Stanislavsky acting method. Go figure.
10. The Woody Allen character is the husband or ex-husband of how many of the sisters?

He is the ex-husband of Hannah, and marries Holly by the end of the film.
Source: Author rootsgrrl

This quiz was reviewed by FunTrivia editor LadyCaitriona before going online.
Any errors found in FunTrivia content are routinely corrected through our feedback system.
Most Recent Scores
Dec 23 2022 : Guest 92: 3/10
Dec 11 2022 : Guest 50: 10/10 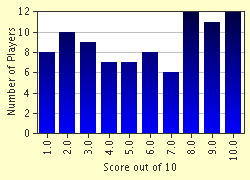 
Other Destinations
Explore Other Quizzes by rootsgrrl