We've now enjoyed more than five decades of pop music. Each decade has produced tunes that will be played forever. From Elvis to Madonna, you will know most of these. Have fun!

This Queen classic was first released in 1975.
"Bohemian Rhapsody" got to #1 in the UK and peaked at # 2 in the US. Freddie Mercury, Queen's flamboyant frontman, died in 1991.
2. The song "Music" was a hit for Madonna in which decade?

"Music" topped the US and UK charts for Madonna in 2000.
Born Madonna Ciccone in 1958, she has been hitting he heights for more than 20 years.
3. In which pop era did the track "Heartbreak Hotel" first hit the charts?

Elvis "The King" Presley released "Heartbreak Hotel" in 1956. He died in 1977.
Elvis has broken almost every sales and awards record in the book. He was inducted into the "Hall of Fame" in 1986.
4. Think back, can you remember when was "Billie Jean" rocking the planet?

This Michael Jackson classic was released in 1983.
His "Thriller" is said to be the world's best selling album with sales in excess 47 million.
Michael Jackson married Elvis Presley's daughter, Lisa Marie, in 1994.
5. How long ago was "(Everything I do) I do it All for You" a massive hit?

Bryan Adams appeared in the charts with this one in 1991.
"(Everything I do) I do it All for You" featured in the movie "Robin Hood Prince of Thieves".
It topped both the US and UK charts.
6. In what decade did "I Want to Hold Your Hand" first hit the charts?

The Beatles released this classic track in 1963.
The "Fab Four" got "I Want to Hold Your Hand" to the top on both sides of the Atlantic.
7. Which decade did John and Olivia tell each other "You're the One that I Want"?

This duet by John Travolta and Olivia Newton-John was a US and UK chart topper.
"You're the One that I Want" featured in the movie "Grease". It first charted in 1978.
8. Can you remember when the Carpenters were on the "Top of the World"?

Brother and sister act Richard and Karen Carpenter got "Top of the World" into the charts in 1973. Karen died in 1983.
"Top of the World" was a US #1, climbing to #5 in the UK singles charts.
9. In which decade did Billy Joel first introduce us to his "Uptown Girl"?

Man of many talents, Billy Joel is not only a singer, he writes his own songs and plays piano.
"Uptown Girl", a hit in 1983, was a UK chart topper.
10. When did "Rock Around the Clock" first grace the charts? 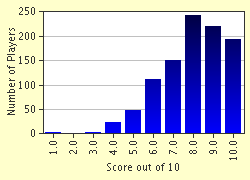