How well do you know country music singer/songwriter, Kenny Chesney? Find out here!

Kenny attended Gibbs High School in Corryton, Tennessee.
2. What was Kenny Chesney's first song to break into the top ten on the USA country music charts?

Kenny's first top ten hit was "Fall In Love" from the album "All I Need To Know". It peaked at number six in 1995.
3. Kenny Chesney was acquitted of all charges in New York, in the year 2000, for stealing a police car.

Chesney was charged with disorderly conduct - a misdemeanor - for taking a ride on a policeman's horse. He was acquitted of all charges.
4. How many times has Kenny Chesney's song "The Tin Man" been released?

"The Tin Man" was released first in 1995 from his first album, "In My Wildest Dreams". Kenny recorded it a second time for his "All I Need To Know" album, and recorded it a third time for his 2001 "Greatest Hits" album.
5. On August 22, 2006, Kenny Chesney appeared on, "JCPenney Jam: The Concert for America's Kids". Who hosted this TV event?

Kenny appeared and performed on the JCPenney Jam with fifteen other musical acts. Dr. Phil McGraw and his wife Robin were the hosts of the event.
6. When the album, "Be As You Are: Songs From an Old Blue Chair" debuted on Billboards's US Pop Charts, what number was it at?

"Be As You Are: Songs From an Old Blue Chair", debuted at #1 on Billboard's pop chart, and most of his previous ones have gone multi-platinum. Kenny also wrote or co-wrote every song on the album.
7. In January 2006, Kenny Chesney was named on CMT's list of the Twenty Sexiest Men in Country Music. What number was Kenny on that list?

The special aired on January 13, 2006. Kenny broke the top ten and was named the 5th sexiest man in country music.
8. Finish this line from a Kenny Chesney song. "Here's to the strong, thanks to the brave, don't give up hope. . . "

"Some People Change" is the line of the song as well as the title of the song. The song has been recorded by three artists, including Kenny Chesney. It was on his "When the Sun Goes Down" CD. The other artists who have released the song are Montgomery-Gentry and George Canyon.
9. Kenny Chesney was one of just a handful of country music artists to win "The Triple Crown" of country music?

He won it again in 2006. The only other performers who have won the Triple Crown are, Barbara Mandrell, Brooks & Dunn, the Dixie Chicks, Merle Haggard and Mickey Gilley.
10. In 2003, CMT had a special called, "CMT: 40 Greatest Fashion Statements". What was Kenny Chesney's fashionable statement?

On November 7, 2003, the special highlighted country fashion statements and Kenny came in at #20 with his Puka Shell Necklace.
Source: Author Beasuare 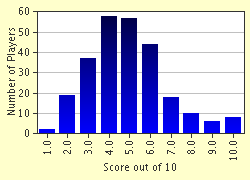 
Other Destinations
Explore Other Quizzes by Beasuare