This lyric quiz is missing certain words, all you have to is select the correct words to complete the lyrics. All questions are multiple choice. Have fun and good luck!

"Mankind will not remain on Earth forever, but in its quest for light and space will at first timidly penetrate beyond the confines of the atmosphere, and later will conquer for itself all the space near the Sun." - Konstantin E. Tsiolkovsky

Some common forms for usages of gates can be for farming plots, for around the property edge of houses. Decorative gates can also be found on outside cellar windows, on the outside of windows themselves.

Sweet tea is a staple drink in the southern states of the United States. The basic recipe that is followed throughout the South is:

Directions
We in the south make the best iced tea you'll find. Maybe it's how it's done, or maybe it is the water in the south, or maybe it's just that a southern belle has put a lot of TLC into making the tea. Who knows!

Place the two cups water in a pot and add the tea bags. Bring to a boil, do not continue boiling. Remove from heat and let steep. Pour warm tea into empty pitcher. Add the sugar and stir until the sugar is dissolved. Fill remaining pitcher with cold water."

Making some room is a common phrase that is used in various forms and for varying things, such as: move over or make space.

A person can usually climb on on a tractor without the assistance of a ladder by using the edging of the tractor "wheel" itself. It is best to make sure the tractor is off when doing this.

When plowing a field there will be dust from the dirt that is shifted during this process.
3. "She thinks my tractor's sexy! It really turns her on --- she's always ____ at me...While I'm _____ along." Do you know which words are needed to complete the lyric?

Staring or observing a person is how we connect when we feel attracted to that person. Sometimes though the attraction is one-sided and that of course is never a good thing.

Tractors make a chugging or belching sound when they are in motion, it is a very loud sound that often times can be heard for some distance.
4. "She likes the way it's ____ -- while we're ____ up the land She's even kind of crazy 'bout my farmer's tan." Do you know which words are needed to complete the lyric?

Tractors pull or lurch forward if the clutch is turned to hard.

Tilling is a term that is used by some farmers. Tilling means the same as plowing.
5. "She's the only one who really _____ what gets me -- she thinks my tractor's sexy!" Do you know which word is needed to complete the lyric?

2. to accept as a fact or truth or regard as plausible without utter certainty - we understand that he is returning from abroad.

3. to interpret in one of a number of possible ways.

4. to supply in thought as though expressed - "to be married" is commonly understood after the word engaged."
6. "We ___ back and forth 'til we run out of light." Do you know which word is needed to complete the lyric?

A day on any working farm that has tractors is the long hours riding a tractor to get the land ready for sowing.

Farm life is a difficult life, and highly dependable on economic situations. If the economy is doing well, then most time so is the farmer. If bad weather occurs or natural disasters hit areas around farmland or the farmland itself, the the farmer's livelihood is much more fragile.

In my opinion, the farmer is life blood of the citizens of any and every country. Without them, the items that we purchase at our local markets would not be there.
7. "Take it to the ___ -- put it up for the night...climb up in the loft -- sit and talk with the ___ on." Do you know which words are needed to complete the lyric?

Barns are used to store and house various items on a farm such as: horses, hay, feed, tackle, wheelbarrows, and that handy tractor to name just a few.

Long before television radio was the in thing and much like the television shows that we know, there were famous radio broadcasts like Orson Welles's "War of the Worlds", "Adventures of Ellery Queen", "Adventures of Sam Spade", and "Amos and Andy".
8. "She said she's got a dream, and I asked what it is --- she wants a little ___ and a ___ full of kids." Do you know which words are needed to complete the lyric?

Farms for the most part are for agricultural purposes. Rich farmland is used for planting, growing, as well as raising different animals that will eventually become food or will give us food by what those animals produce such as eggs and milk.

When I think of a yard, I think a nice comforting place where children can play safely. In South Philadelphia, yards are in the back of the houses and most times are too small for even a barbecue grill!
9. "And one more teeny weeny ___ before I take her home." Do you know which word is needed to complete the lyric?

Kenny Chesney was born on March 26, 1968; his father Dave was a school teacher and his mother Karen was a hairdresser.

Kenny always knew that growing up he would be a country singer. His sister, Jennifer always encouraged her brother to reach for the stars and grab hold of his dreams.
10. "Well she ain't into cars or pickup trucks -- but if it runs like a Deere...man her eyes ____! --- She thinks my tractor's sexy!" Do you know which word is needed to complete the lyric?

In 1991, Kenny headed for Nashville, Tennessee to be closer to his dream of becoming a country singer and songwriter.

The hit single "She Thinks My Tractor's Sexy" was originally released from Chesney's "Everywhere We Go" album in 1999.
Source: Author JuniorTheJaws 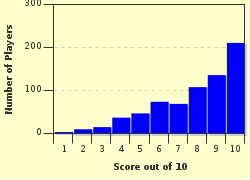 
Other Destinations
Explore Other Quizzes by JuniorTheJaws