This is a test to see how well you know the songs that are Kenny Chesney's. Good Luck!

Share on Facebook
Share on Twitter
Share by E-Mail
Author
jkidd
Time
3 mins
Type
Multiple Choice
Quiz #
140,602
Updated
Dec 03 21
# Qns
10
Difficulty
Average
Avg Score
8 / 10
Plays
3912
This quiz has 2 formats: you can play it as a or as shown below.
Scroll down to the bottom for the answer key.

The CD's name is "Everywhere We Go", not "Everywhere We've Gone".
2. What song has these lyrics? 'One bottle of wine and two dixie cups..'

Yes, the song is called "Don't Happen Twice". It is one of the great songs Kenny has sung.
3. Was Kenny Chesney voted one of Country's Sexiest Men?

Kenny WAS voted one of Country Music's hottest bachelors and sexiest men alive.
4. From what CD was his hit song "She Thinks My Tractor's Sexy"?

That was the best Kenny CD yet. "She Thinks My Tractor's Sexy" is just one of the wonderful songs on it.
5. Who is Kenny's best friend and fellow musician?

Kenny and Tim have been friends for years, and Tim's kids love Kenny.
6. What is the name of Kenny's first album?


Answer: In My Wildest Dreams

Kenny has put out 7 wonderful CDs with the best songs; the best CD is "In My Wildest Dreams".
7. Where does Kenny choose to spend his vacations?

Kenny goes to the Caribbean islands quite often to "recharge".
8. What is Kenny's record label?

Kenny is signed with the best record company, and that is BNA.
9. Did Kenny play football in high school?

Kenny said that the only reason he played was because somebody told him he couldn't.
10. Kenny Chesney is 6'1" tall.

This quiz was reviewed by FunTrivia editor bullymom before going online.
Any errors found in FunTrivia content are routinely corrected through our feedback system.
Most Recent Scores
Dec 10 2022 : Guest 86: 3/10
Dec 06 2022 : Guest 98: 10/10 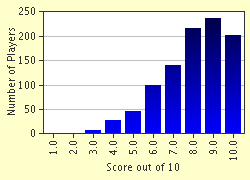 
Other Destinations
Explore Other Quizzes by jkidd