Everyone knows the original members of Black Sabbath, but the band has had a revolving door posted right out front where many other members have passed. How much do you know about these lesser known members or guest musicians of Black Sabbath?

Quiz Answer Key and Fun Facts
1. Dave Spitz was the bass guitar player on the 1986 Black Sabbath album "Seventh Star". The album wasn't necessarily a classic Sabbath sounding album as it was originally to be a Tony Iommi solo album. Dave Spitz did a great job offering his skills as the bass player on the album. Of the following, which tidbit of information regarding Dave Spitz is untrue?


Answer: Dave has also spent time as the bass player in the bands Skid Row, Queensryche and Suicidal Tendencies.

No, Dave "The Beast" Spitz was never the bass player in Skid Row, Queensryche or Suicidal Tendencies, but he has played with Great White, Nuclear Assault, White Lion and Impellettiri. The other facts are true though. His brother was in Anthrax in the 1990s and 2000s, he is a civil trial lawyer in Florida and he has been practicing karate since he was a teenagers. In addition to Dave playing on the album "Seventh Star", he received a credit as performing on the Sabbath album "The Eternal Idol", but he never actually played on the album. Bob Daisley was actually the bass player on the album.
2. Bev Bevan teamed up with the band Black Sabbath and was included on the 1987 album "The Eternal Idol". Mr. Bevan is probably more well known as the drummer for which popular rock band known for their symphonic and progressive sound?

Bev Bevan played drums on all of the albums recorded by the Electric Light Orchestra with the exception of the "Zoom" album, which is often thought of more as a Jeff Lynne solo album than a full scale Electric Light Orchestra offering.
Bev's percussion work was featured on the top ten ELO singles "Can't Get It Out Of My Head", "Evil Woman", "Telephone Line" and "Don't Bring Me Down".
3. Ray Gillen spent time in Black Sabbath as their vocalist, appearing on the album "The Eternal Idol". His vocal talents may be more associated with another rock band though. Which band featured ex-Ozzy Osbourne guitarist Jake E. Lee and one-time Sabbath vocalist Ray Gillen?

Badlands was born when Jake E. Lee separated from Ozzy Osbourne's band and was looking to form a new band. After meeting with Ray Gillen, Badlands was formed. Gillen recruited drummer Eric Singer, who had also been in Black Sabbath, and Greg Chaisson was chosen as the bass player. Badlands was a no-nonsense rock and roll band who released three albums before disbanding in 1992 amid acrid tensions in the band. Sadly, Ray Gillen passed away in 1993.
4. Which singer replaced original Black Sabbath vocalist for a very brief period, but was out of a job when he was fired in January of 1978 when Ozzy decided to rejoin the band?

Dave Walker was one of Tony Iommi's mates back in Birmingham, England. When Ozzy was fired from Black Sabbath, Iommi remembered his friend and asked him to join. Poor Dave never appeared on any Sabbath album, but he did appear with the band on the BBC program "Look Hear" performing the classic hit "War Pigs".

After his firing from the band, Dave basically got out of the music business until he was asked to return to his old band Savoy Brown. Dave Walker also was in an early version of Fleetwood Mac.

His career may not be well known, but his talents as a vocalist have been well respected for a very long time.
5. Bob Daisley is a tremendously talented bass player who once joined Black Sabbath to record the "The Eternal Idol" album. He is also well know as the bassist in Ozzy Osbourne's band when Ozzy left Black Sabbath in 1979. Bob Daisley has been in and out of many great bands over the years and has appeared on numerous albums as either a guest musician or an actual band member. One such band was Rainbow, with whom Daisley played from 1977 to 1979. Which of these Rainbow albums is Daisley credited as the bass player?

Bob Daisley, the Australian bass prodigy, made a great career playing and touring with bands such as Ozzy Osbourne, Black Sabbath, Uriah Heep, Rainbow, Gary Moore and Dio. His time spent with Ozzy Osbourne was spent in court rooms as both he and Lee Kerslake were fired before Ozzy's second solo release and they were not given proper credit for songs they either helped write or played on. Regardless of the lawsuits, Daisley continued to work with Ozzy in some capacity all the way until the early 1990s and the album "No More Tears".
6. Vinny Appice is a drum machine. It's difficult to find a rock drummer with his skill level and endurance. Vinny has been in several incarnations of Black Sabbath over the years and has appeared on several albums including "Mob Rules", "Live Evil" and "Dehumanizer". More recently, Vinny has put together a new band with even a harder sound than Black Sabbath. His band mates in this project include Rex Brown of Pantera fame and Mark Zavon from the band Down. What is the name of this band?

Vinny Appice is a talented musician who has played with several great artists over the years. His brother, Carmine, is an equally talented drummer and they have even toured together on a project titled "Drum Wars". Vinny has also been known to kick around with bands such as Dio, Rick Derringer and World War III. Appice has even appeared as a session musician for John Lennon on the song "Whatever Gets You Through The Night" where he provided hand clapping.

Not bad for a 16 year old New York kid.
7. David Donato is a vocalist who appeared on a limited scale with Black Sabbath, primarily recording a few demos in the mid 1980s. Mr. Donato may well best be remembered as the vocalist of the glam-rock band White Tiger. Which ex-Kiss guitarist team up with David Donato in the band White Tiger?

Although David's time in Black Sabbath was short and it did not yield any album credits, his vocals were heard, and heard by Mark St. John who was looking for a vocalist for his band White Tiger. White Tiger released only one album and then they were dropped by their label for lack of success or potential.

Unfortunately, Mr. St. John passed away in 2007 due to a cerebral hemorrhage in 2007.
8. Andrew Lloyd Webber even has a connection to Black Sabbath. No, he was never a member, but one of Black Sabbath's past vocalists appeared on the "Jesus Christ Superstar" album which was penned by Webber and Tim Rice, portraying the title role. Which ex-Sabbath vocalist appeared on the "Jesus Chris Superstar" album?

Ian Gillan is most known as the long time vocalist for the rock band Deep Purple, but he has spent time away from the band. One such hiatus saw him play with Black Sabbath where he would appear on the "Born Again" album as lead vocalists. Ian has also appeared with Iommi in the supergroup WhoCares, a band put together to raise money to rebuild Armenian schools. WhoCares has featured Jon Lord (Deep Purple), Jason Newsted (ex-Metallica), Nicko McBrain (Iron Maiden) and Mikko Lindstrom (HIM) as members.
9. Glenn Hughes is a bass player and vocalist whose credits include time with Deep Purple, Gary Moore, Trapeze and Black Sabbath. Hughes played on the Black Sabbath featuring Tony Iommi album "Seventh Star" in 1986. Hughes formed a supergroup in 2009 with guitar virtuoso Joe Bonamassa, drum legend Jason Bonham and keyboard prodigy Derek Sherinian. What is the name of this band?

Black Country Communion's four members are all well respected musicians in their own rights. Bonamassa is an accomplished blues guitarist who is well respected in the blues community. Jason Bonham is the son of Led Zeppelin drummer John Bonham who has played with a multitude of artists including UFO, Foreigner, Steel Dragon and his own solo band simply titled Bonham. Derek Sherinian is the ex-keyboard player from Dream Theater, Plane X and Alice Cooper's band. Combined, they are a force to be reckoned with.

Their first album was released in 2010 and it was a surprise hit, reaching number 54 on the Billboard 200 albums chart.
10. Eric Singer replaced Bill Ward in Black Sabbath for a while after the Live Aid concerts. Eric played on the "Seventh Star" and "The Eternal Idol" albums. Eric is best known as the drummer for which other hard rock band?

Eric Singer joined Black Sabbath after Bill Ward announced his departure from the band in 1985. After a few years playing in Black Sabbath and other projects, Singer was asked by Kiss to fill in for a very ill Eric Carr. Singer played on and off with the band as Carr and original drummer Peter Criss would also join the band at various times.

After Carr's passing in 1991, Singer was asked to join the band as the new drummer. With the exception of times when Peter Criss has played with the band, Singer has been the main drummer for the band and was the drummer on Kiss' 2009 album "Sonic Boom".
Source: Author ralzzz 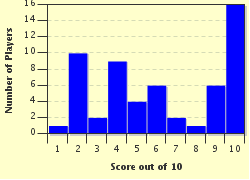