Hope this quiz brings back some great music memories.

Quantum Jumps sound was a mixture of fusion, jazz and funk. The song included the immortal chant:

"Taumata-whaka-tangi-hanga-kuayuwo
tamate-aturi-pukaku-piki-maunga
horonuku-pokaiawhen-uaka-tana-tahu
mataku-atanganu-akawa-miki-tora"
2. Which British band included the lyrics "Hey teacher leave us kids alone" in their 1979 #1 hit in the UK?

From the film "The Wall" which had Bob Geldof as one of the characters and hit the #1 spot in over ten countries.
3. Which song gave Dutch band Golden Earring their biggest UK and US hit in 1973?

"Radar Love" was voted as the second-greatest driving song on the sixth series of the UK TV show "Top Gear", losing out to Queen's "Don't Stop Me Now".
4. In the 1980s British pop group, The Thompson Twins, had many hits including "Hold Me Now", "Doctor Doctor" and "We are Detectives". Which comic strip did the group take their name from?


Answer: "The Adventures of Tin Tin"

The band took their name from the two bumbling detectives Thomson and Thompson from Hergé's comic strip, "The Adventures of Tintin".
5. In 1983, British band New Order had a top 10 hit with a song that was to become the biggest selling 12" single of all time. Can you name the song?

As the group were signed on to Factory Records which were not members of the British Phonographic Industry Association the band did not receive an official gold disk for all their hard work.
6. The British band The Eurythmics had a #1 selling single with this hit in 1985. It featured a harmonica solo by the legendary singer Stevie Wonder. What was the name of the song?


Answer: "There Must Be An Angel (Playing With My Heart)"

Surprisingly, this was Eurythmics' only #1 hit single in the UK.
7. Which 1997 UK top 10 hit features the following lyrics "Trying to make ends meet, trying to find some money then you die"

The Verve's song "Bitter Sweet Symphony" reached #2 in 1997 in the UK.
Although the song's lyrics were written by Verve vocalist Richard Ashcroft, it has been also credited to Keith Richards and Mick Jagger, after charges by the original copyright owners that the song was plagiarized from the Andrew Oldham Orchestra recording of The Rolling Stones' 1965 song "The Last Time". Even though the Verve had negotiated a license to use a sample of the song, it was deemed that too much of the sample was used.
8. Take That had a UK #1 in 1993 with "Relight My Fire". Who featured on the song with the band?

This was an important #1 for Lulu as it broke the record between her chart debut reaching #1 with "Shout" in 1964 and 29 years later with Take That.
9. Blur beat Oasis to the #1 slot of the UK charts in 1995 with their song "Country House" over Oasis' "Roll With It."

The album was one of the first to use music videos as successful promotional tools.
Source: Author lorstrivia 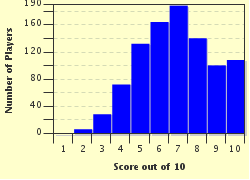 
Other Destinations
Explore Other Quizzes by lorstrivia