The Rolling Stones in 1969 Trivia Quiz

1969 was a noteworthy year for the Rolling Stones. Please take this quiz about some of the events and the music which made that year memorable. Good luck.

Quiz Answer Key and Fun Facts
1. Brian Jones, one of the founding members of the Rolling Stones, passed away on July 3, 1969. Where did he die?


Answer: In a swimming pool

Brian Jones was an integral member of the Rolling Stones during the 1960s. He was a versatile musician, playing a wide variety of instruments on Stones' recordings: the sitar on "Paint It, Black" and the dulcimer on "Lady Jane", for example. However, in the late 1960s Jones succumbed to the temptations of narcotics and was fired from the band in June 1969. Jones died in a swimming pool at his farm home in Sussex, located in southeastern England. Jones' motionless body was found at the bottom of the pool.

The official coroner's report listed "death by misadventure" as the cause of death.
2. Which guitarist replaced Brian Jones as a member of the Rolling Stones in 1969?

In June 1969, the Rolling Stones decided to sack Brian Jones, citing Jones' increasing drug addiction problem and his unreliability in showing up for work. Mick Taylor was tabbed to be Jones' replacement at the guitar position. Taylor was already an accomplished musician, having performed with John Mayall's Bluesbreakers. Taylor joined the Stones on their USA tour in the fall of 1969.

He would play with the Rolling Stones until the end of 1974, when he decided to embark on a solo career. Ronnie Wood would officially join the Stones in 1976. Ian Stewart played keyboards with the Stones on their 1969 tour.
3. On July 5, 1969, the Rolling Stones performed at a free concert in London. Where did this concert take place?

The Rolling Stones gave a free concert in London's Hyde Park on July 5, 1969. An estimated 250,000 fans attended the show. Before the Stones played any music, Mick Jagger paid tribute to Brian Jones by reading excerpts from an 1821 poem called "Adonais" by Percy Shelley. One of the verses of this poem reads:

"Peace, peace! he is not dead, he doth not sleep
He hath awakened from the dream of life
'Tis we, who lost in stormy visions, keep
With phantoms an unprofitable strife..."
4. The Rolling Stones played two concerts on November 8, 1969, in the city of Los Angeles. At which site did these shows take place?

The Rolling Stones played at the Forum, giving a pair of concerts on November 8, 1969. The Forum (or "Great Western Forum") is located in Inglewood, California. It was home to the NBA Lakers and the NHL Kings until 1999. About 18,000 fans attended the Stones' shows.

The song list included such standards as "Satisfaction" and "Under My Thumb", as well as some tunes from the 1968 "Beggars Banquet" album.
5. In 1970, the Rolling Stones released a live album which featured songs from their 1969 U.S. tour. What was the name of this album?

"Get Yer Ya-Ya's Out" was a live Stones' album which was released in September 1970. Most of the music on the collection was recorded at New York City's Madison Square Garden on November 27-28, 1969. It is considered to be one of the best live albums ever produced. Mick Jagger and the band were in top form, and Jagger snarled, "All right, New York City, you like to talk a lot! Let's have a look at you!" "Got Live If You Want It!" was released in 1966, and "Love You Live" appeared in 1977. "Live'r Than You'll Ever Be" was a bootleg of the Stones' 1969 concert in Oakland, California.
6. In the summer of 1969, the Rolling Stones had an international number one hit single. Can you identify this classic song?

"Honky Tonk Women" was an international smash hit single for the Rolling Stones in 1969. This tune began with the lyrics, "I met a gin soaked bar-room queen in Memphis / She tried to take me upstairs for a ride..." The song was released in July and became a number one hit on the U.S. singles charts during August and September.

The three incorrect choices in this question were all recorded in 1968.
7. In December 1969, the critically acclaimed album "Let It Bleed" was released. Which singer shared the spotlight with lead vocalist Mick Jagger on the classic tune "Gimme Shelter"?

Merry Clayton, a soul singer from New Orleans, provided backup vocal work for the Rolling Stones on the track "Gimme Shelter" from the 1969 "Let It Bleed" album. Clayton belted out these lines in the middle of the song:

Clayton would later accompany Mick Jagger in singing the tune's finale, "It's just a kiss away, it's just a kiss away..."
8. The 1969 album "Let It Bleed" featured guitarist Keith Richards singing lead vocals on one song. Can you name it?


Answer: You Got the Silver

Keith Richards sang lead vocals on the song "You Got the Silver" from the 1969 "Let It Bleed" album by the Rolling Stones. The song was recorded in February 1969 and featured these lyrics:

"You got my heart, you got my soul
You got the silver, you got the gold
You got the diamonds from the mine
Well, that's all right, it'll buy some time..."

Brian Jones played autoharp on this song- one of Jones' last appearances with the Rolling Stones.
9. The Rolling Stones held a free concert in Altamont, California, on December 6, 1969. Which San Francisco venue was the Stones' original choice for the event?

The Rolling Stones performed at a free concert at the Altamont Speedway in northern California on Saturday, December 6, 1969. Originally, the Stones wanted to give the concert in San Francisco's Golden Gate Park, but city officials never issued permits for the concert.

In addition, Kezar Stadium, located in the park, was being used for a San Francisco 49ers football game. Dick Carter, owner of the Altamont Speedway, volunteered his facility because he thought the concert would be a good public relations move. Sears Point, a road course raceway, is located outside of San Francisco.
10. Unfortunately, the Stones' Altamont concert turned out to be a violent affair. Which scheduled opening act refused to perform because of the violence?

Approximately 300,000 fans gathered at the Altamont Speedway on December 6, 1969, and the vibrations were definitely not good. Pushing and fisticuffs broke out in the crowd while some of the opening acts performed. Marty Balin of Jefferson Airplane was assaulted by rowdy individuals; Michael Shrieve of Santana reported the incident to the Grateful Dead's Jerry Garcia.

The Grateful Dead thus refused to go on stage, citing lack of security. Later, while the Rolling Stones were performing, a homicide took place in the crowd.

The events at the Altamont Concert were captured in a 1970 film entitled "Gimme Shelter."
Source: Author mrgrouchy 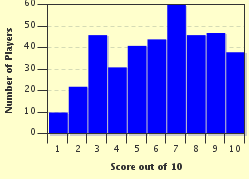