John Entwistle, bassist of the Who, deserves both this name and this quiz.

Quiz Answer Key and Fun Facts
1. What was the nickname of John's favorite bass guitar?

John's favorite was a pink Fendercaster made from pieces of other broken guitars, therefore the nickname Frankenstein. It was recently sold at auction.
2. Where was John born?

John was born in in Chiswick, England to Herbert and Maud Entwistle, who separated shortly after his birth.
3. When was John born?

John was born seven months and eight days after Roger, the oldest of the Who.
4. What type of music did the band play when John first met Pete Townshend?

John had a fascination with the trumpet and joined trad jazz bands so he could play it. Here he met Pete Townshend and they played in a few bands together until John went to the Detours and recommended Pete and the rest was almost history.
5. After John graduated from Acton Grammar (similar to high school), where did John go to work?

Inland Revenue Service is England's IRS. John used to sleep in the office after long nights singing with the Detours. His voice was often shot and he became a filing clerk.
6. Which band did John give a name and was rumored to join with Keith Moon?

John said that the group, formerly the New Yardbirds, would "go down like a lead zeppelin." Ironically, their lead singer Robert Plant auditioned for the role of lead singer for The Who. It has also been said that it was Moon who gave the band their name - different versions of this story abound.
7. Which is not a song written by John?

John became a prolific songwriter and had his own solo career with his group "The Ox."
8. How many times has he been married?

He's been married twice and has one son, Christopher, from the first marriage.
9. What year did John Entwistle die?

"Boris" and "My Wife" are two of the most humorous of all Who songs. "Twist and Shout" was recorded in 1982 and is a great cover song. As is "Summertime Blues," recorded at Leeds University and John sang backup.
Source: Author monkee16_99 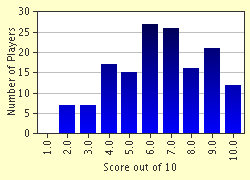 
Other Destinations
Explore Other Quizzes by monkee16_99