British Kings and Queens and Everything in Between Quiz

*Executions, wars, mad Kings, bloodthirsty Queens and traitors.These and many more made history what it means to us today.

Quiz Answer Key and Fun Facts
1. Who was the wife of Henry VI of England?

Margaret of Anjou was a formidable woman and ambitious queen who after seeing her husband Henry VI of England deposed as King, imprisoned and then clandestinely murdered on orders from Edward IV, would ride with the Lancastrian army plotting to win the crown back for her son Edward of Lancaster, Prince of Wales until he too was murdered.
2. Which of Edward IV's brothers was drowned in a butt of Malmsey (wine) on Edward's orders?

George, the Duke of Clarence was a highly volatile drunkard who unwittingly whilst locked in the Tower by his brother Edward IV of England, spoke stupidly and drunkenly to the Bishop Stillington of Bath and Wells about a former betrothal of his brother the King, which if this knowledge was ever made public would render Edward's sons bastards, thus making them unable to ascend the English throne. Clarence was given the choice of method of execution and chose death by drowning, perhaps this is fitting because most accounts of his day inform us that he was a hopeless drunkard.
3. Who was Mary Queen of Scots' third husband?

This brutally ambitious Scottish charmer is said to have broken into the Queen of Scots bedchamber, raping her and then forcing her to marry him with the intention of making himself King of Scotland. His plans came to nought though, because most of the Scottish nobles could not stand him.

They forced him to flee to Scandinavia. According to some sources he died a hideous death in Sweden - insane, starving and chained in a filthy dark dungeon.
4. Who was the woman that King John had thrown into a dungeon with her son and then had them starved to death?

Maude de Braose was a very outspoken woman by the standards of her day. When her husband William incurred the wrath of King John and was stripped of his titles and lands and in mortal danger of losing his head to the axe, he fled England leaving Maude to face John's notoriously gruesome retribution, which she did so with stoic courage.
5. What palace was Mary Queen of Scots born in?

In the 16th century Linlithgow was a beautiful palace, being the traditional lying-in place for expectant Queens. Mary's father James V was born there. Now, 461 years later most of it is decrepit and in ruins.
6. Between what years did Elizabeth I reign over England?

Elizabeth I was arguably England's greatest Queen. She was stubborn, wilful, charismatic and autocratic. She created a completely original untouchable virgin ice queen persona, and it is perhaps because of this that she is best remembered. During her reign England flourished, and she gave her subjects welcome stability after the turmoil of the preceding 10-12 years.
7. Who was Edward IV secretly betrothed to before he married Elizabeth Woodville?

Edward IV of England was a lecherous man who enjoyed all the extra bonuses his Kingship brought with it. Known as the 'Sunne in Splendour', he had a long string of mistresses and it is rumoured he raped his wife before he secretly married her even though she was a highly unsuitable bride. Edward was a popular King in a time of much strife and would have continued to be so if he had not lost his looks, health, and finally his life to the excesses that he enjoyed so much.
8. What, as he lay dying, did James the V of Scotland say when he was informed of the birth of his daughter Mary?


Answer: "Adieu, farewell, it came with a lass, it will pass with a lass"

It is reported that in the final days of his life James the V had a complete mental and nervous breakdown after suffering a defeat at the hands of the English after the Battle of Solway Moss in 1542. His only surviving heir, a sickly girl child born six days before was not expected to live. James the V died at Falkland on 14 December 1542.
9. In which year was Richard III crowned King of England?

Richard III has probably been the most discussed, despised and villified English King apart from John. We will probably never know the truth about this enigmatic and fascinating King. Due to the writings of Shakespeare we are presented with the cold, evil, calculating hunchbacked child killer that creeps around draughty castles clutching his withered arm. Shakespeare was a product of his generation and environment, and history is always written by the victors. King Richard III died with courage at the Battle of Bosworth in 1485, hacked down by his enemies whilst trying to break through the vanguard of Henry Tudor.
10. The "Kingmaker" was the nickname of which English Earl?

Richard Neville, Earl of Warwick was a highly driven,intense and versatile man. Born in 1428 he was descended from John of Gaunt's marriage to Katherine Swynford. After he had helped put Edward IV of England on the throne, he married his first daughter Isabel to George, Duke of Clarence.

He eventually betrayed Edward, joining forces with Margaret of Anjou and the Duke of Clarence, forcing Edward to flee England. Eventually Edward recovered his throne and the Kingmaker was dead in 1470.
11. How many children did Elizabeth of York bear her husband King Henry VII?

The favourite daughter of Edward IV of England, Elizabeth of York led an ultimately sad life. By the time of her death in 1503 she had seen most of her family either murdered, executed or die prematurely. She was given in marriage to Henry Tudor for purely political reasons, and out of the eight children she bore Henry only three reached adulthood, one of them becoming Henry VIII.
12. What was the name of King Henry I of England's son who drowned when the White Ship foundered and sank off the coast of Normandy in 1120?

This unfortunate episode of England's history was directly responsible for the bloodshed that followed the death of King Henry I. After the death of William,the only heir that King Henry had was his daughter Maude. The nobles were outraged and put forth her cousin Stephen who stole the crown in December of 1135.What followed was probably the most dismal period that England has ever known, only ending with the death of Stephen and the crowning of Maude's son Henry as Henry II on December 19 1154. Thus the mighty Plantagenet Dynasty was founded.
13. Where did the last battle of the War of the Roses take place?

After the death of King Richard the III at the battle of Bosworth and the ascension of Henry Tudor to the English throne, there were many disaffected Yorkists who rallied to Francis Lovell's and Margaret of Burgundy's cause to put Edward, the orphaned son of George of Clarence on the throne.In June 1487, the rebel Yorkists lost to Henry Tudor after a bloody battle and the War of the Roses were no more.
14. Which of these people was NOT executed, but died in battle?

Francis Lovell was a staunch adherent to the House of York, particulary towards Richard III. He apparently was a son of a Lancastrian but was sent as a boy as a squire to Richard Neville, the Earl of Warwick.After the battle at East Stoke in June 1487, nothing more was ever heard of him and it is probable that he was killed in the battle or attempting to flee after it.
15. What was found hidden under the skirts of Mary Queen of Scots after she was beheaded in 1587?

The sad sad story of Catholic Mary Queen of Scots, who ruled with her heart and married very unsuitable men. So much has been written and debated about and over her. After the "dolorous" stroke had removed her head from her shoulders and the "evil whore" was finally dead, every single item that she had worn or carried into the execution hall at Fotheringay was either confiscated or burned.

This was apparently done to appease the English fear that any relic of Mary's would become a Catholic icon.
16. In what year was Lady Jane Grey executed?

Lady Jane Grey, the bookish, sombre and highly intelligent daughter of Henry Grey, Duke of Suffolk and his wife Lady Frances Brandon, was manipulated and then exploited. In the dangerous and often treacherous world of 16th century English politics, she was forced by her ambitious family into an unwanted marriage and then an illegal Queenship that lasted all of nine days.

After Mary Tudor became Queen she imprisoned Jane, then had her beheaded.
17. Who was the second of Henry VIII's wives to be executed on his orders?

Katherine Howard, the fifth wife of Henry VIII, was vibrant, flirtatious, immature and ultimately doomed. By the time Henry married Katherine he was an obese, disease ridden bitter old man. No longer was he the glorious golden prince of his youth and early adulthood, but he was still the King of England and when his eye happened upon the youthful, pretty and vivacious Katherine Howard - "The Rose without a Thorn", he wanted her. And what Henry wanted, he always got.
18. Which English King on his deathbed murmured "Shame, shame upon a conquered King"?

Henry II was the founder of the mighty Plantagenet Dynasty. He was one of England's greatest kings and his name is wrapped in legend. Yet he died in 1189 bereft and alone, lamenting the fact that each of his sons, even his favourite, John, had betrayed him in their search for the power and glitter of his crown.
19. Which Queen consort of England was descibed as the "most beautiful woman in Christendom"?

Eleanor of Aquitaine, the wife of Henry II, was descibed as "the most beautiful woman in Christendom". This extraordinary woman was the only woman to wear the crowns of both England and France. Eleanor bore her husband King Henry II of England eight children, two of whom succeeded to the English throne as Kings Richard I (Lionheart) and John.

In later years Henry and Eleanor became estranged due to affairs Henry had, most notably with Rosamund Clifford. Eleanor outlived Henry by more than fifteen years dying herself at the age eighty-two in 1204.
20. Who had Margaret Countess of Salisbury executed in 1541?

The execution of the Countess of Salisbury was truly one of the low points of the reign of Henry the VIII. Margaret was the daughter of the Duke of Clarence who had been executed by his brother Edward IV in 1478 and Isabel Neville, the eldest daughter of Warwick the "Kingmaker".

The Countess of Salisbury's days were numbered when Henry VIII decided there was too much Yorkist blood left in England that might cause an uprising and threaten his son and heir Edward. Margaret was dragged kicking and screaming to the scaffold at the age of 68 in 1541.
Source: Author STORMY13 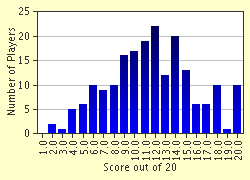 
Other Destinations
Explore Other Quizzes by STORMY13