After a visit to a mysterious shop, you've finally got scope for your dreams: a flat-packed universe, some assembly required. Let's see how well you can follow the instructions in Genesis 1...

Quiz Answer Key and Fun Facts
1. Your flat-packed universe is a starter set: "in the beginning," before you bought it, "God created the heavens and the earth," so those are included. You should start by making sure that the box contains everything it should. According to Genesis 1:2 (New International Version), which of these things should NOT be true?


Answer: "The heavens and the earth [are] completed in all their vast array."

The heavens and the earth are not completed yet: this triumphant statement cannot be made until Genesis 2:1. If you're a fan of the Gospel of John, you might also expect to find the Word, in accordance with John 1:1 -- "In the beginning was the Word, and the Word was with God, and the Word was God" -- but the Word isn't explicitly on this contents list.
2. It's easiest to work with proper lighting, so let's make that the next step. According to Genesis 1:3, what is the correct way to light up the universe?


Answer: Say that it should be so

"And God said, 'Let there be light,' and there was light." Admittedly, this effect may be tougher for a mere mortal to produce. Perhaps practicing in front of a mirror would help. Once you've worked it out, don't forget to "separate ... the light from the darkness" (Genesis 1:4): it will be hard to make a proper first day otherwise!

You may be growing frustrated with this whole creation business, but look on the bright side: at least you don't need a hex wrench.
3. This universe is full of water, which makes it hard to admire properly. It's time to separate the waters of the earth from the waters of the heavens. Genesis 1:6 (New International Version) gives advice on accomplishing this. What sort of structure should you build?

A vault works on the same principle as an arch, but it spreads out to form a ceiling instead of limiting itself to a single line of stones. Think of the vaulted ceilings of a great cathedral to capture this image of the making of the sky: "So God made the vault and separated the water under the vault from the water above it" (Genesis 1:7). Other translations render the word differently: "firmament" is popular, and so is "expanse."

Don't worry: we'll give you more than twenty-four hours to construct a globe-spanning vault entirely underwater.
4. Construction is exhausting, but there's no good place to rest: it's time to make dry land appear. Going by Genesis 1:9, how should this be done?


Answer: Gather the water together.

"And God said, 'Let the water under the sky be gathered to one place, and let dry ground appear.'" This gives an image of water flowing away from what is to be land, leaving it dry as the water piles onto itself. The mechanics of this change from an entirely water-covered world are difficult to visualize -- is the water gathered into a huge tsunami towering over the land? -- but I have confidence in your creativity. Perhaps you can dig some holes and gather the water there.
5. I hope you're checking your work, by the way. In Genesis 1, God is meticulous about doing so at each step. How does He check His work?


Answer: He sees that it is good.

The phrase "And God saw that it was good," or something close to it, appears seven times in the first chapter of Genesis, after almost every act of creation. (The vault of Genesis 1:6-8 and Question 3 is not explicitly declared to be good, but it isn't insulted or remade, either.) At the very end, the whole kit and caboodle gets God's highest stamp of approval: "God saw all that He had done, and it was very good" (Genesis 1:31).
6. It's time to introduce life! Specifically, it's time for "seed-bearing plants and trees... that bear fruit with seed in it." Your to-do list is already quite long, though, and it's time to delegate. According to Genesis 1:11-12 (New International Version), who or what actually produces the plants?

The creation story is retold in Genesis 2, and many elements change in the retelling. For example, in Genesis 2, plants are not the first form of life: the first man is created when "no shrub had yet appeared on the earth and no plant had yet sprung up" (Genesis 2:5-7). God also gives flora much more personal attention, even "plant[ing] a garden" in Genesis 2:8. Viruses, bacteria, algae, and fungi are not mentioned in either chapter.
7. With abundant plant life laboring to add oxygen to the atmosphere, you can revisit the problem of light. Uniform illumination was all right at first, but a sun, moon, and stars will be better still! Make sure you get the details right: according to Genesis 1:14 (New International Version), what other purpose must they serve?


Answer: They must be "signs to mark sacred times, and days and years."

The moon, in its orbit around the Earth, has been used by many peoples to time holy days: its progress can be measured by the Earth's shadow on it. The Jewish calendar is lunar, and some Christian holidays -- notably Easter -- are set by the lunar cycle. Meanwhile, the rotation of the Earth makes the sun and stars appear to move across the sky during the day and night, and Earth's progress in its own orbit around the sun means that different groups of stars are visible at different times of the year. Set things up this way, and the seeming "lights in the vault of the sky" (Genesis 1:15) will be clocks and calendars too.
8. Let's add some animals to the mix! According to Genesis 1:20-23, which of these creatures should be made first?

The water and the air receive animals first, in the telling of Genesis 1. "And God said, 'Let the water teem with living creatures, and let birds fly above the earth across the vault of the sky.' So God created the great creatures of the sea and every living thing with which the water teems and that moves about in it... and every winged bird" (Genesis 1:20-21). Land animals and humans don't appear until the next day.

When creation is retold in the next chapter, it's a different story: Genesis 2:19 implies that land animals and birds are made together and makes no mention of sea creatures at all. We now know that life began in the sea.
9. Rest easy: creation is nearly finished! All you need now are people to fill it with. What instructions does Genesis 1:27 (New International Version) give for the making of mankind?


Answer: They should be created "in the image of God."

"Then God said, 'Let us make mankind in our image, in our likeness, so that they may rule over the fish in the sea and the birds in the sky ...' So God created mankind in his own image, in the image of God he created them; male and female he created them" (Genesis 1:26-27).

Genesis 1 says nothing about the mechanics of this creation: it's the retelling in Genesis 2 that describes God forming Adam from dust (verse 7). That chapter also insists that Eve was formed from Adam's rib (verses 21-23), even though Genesis 1:27 places men and women on equal footing.

With this kit based on Genesis 1, you've got a lot of room for creativity. You might find water a likelier starting point than dust, though, given the composition of the human body!
10. One piece of organizational work, and you're done! If your creation is to sustain itself, you'll need to give the creatures some nourishment. Going by Genesis 1:30 (New International Version), what food should you give "to all the beasts of the earth"?

"Every green plant" is designated as food not only for "the beasts of the earth," but also for "everything that has the breath of life in it." This is the basis of the belief among some Jews and some Christians that all creatures were initially vegetarian, although a beast red in tooth and claw could certainly take what was not given.

Fruited trees are given to mankind as food in Genesis 1:29; all fruits have seeds in them ("seedless" watermelons notwithstanding). This category would seem to include the notorious "tree of the knowledge of good and evil," which is thus divinely offered in one chapter and divinely forbidden in the next (Genesis 2:17). Setting up consistent rules in the beginning will spare both you and your creation a world of trouble!
Source: Author CellarDoor 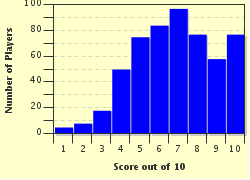