All multiple choice with one question for each decade of the century. This was made for dummies like me. I hope that you enjoy it! :-)

Quiz Answer Key and Fun Facts
1. The new American League began in 1901, and Philadelphia Athletics Nap Lajoie was the first to lead the league in home runs. How many did he hit?

Home runs were not a commodity in early baseball, and nobody hit 30 home runs until Babe Ruth did in 1920. Lajoie had played for five seasons with the Phillies of the NL before joining the Athletics in 1901. He was also the first American Leaguer to hit for the Triple Crown in 1901 also.
2. 1912 saw baseball commissioner Ban Johnson suspend Ty Cobb for fighting with a fan. In protest, Cobb's teammates went on strike and refused to play the Philadelphia Athletics that day on May 18th. The team manager was forced to hire local amateurs, and used a seminary student as a pitcher. The pitcher threw a complete game of 26 hits and lost 24-2. Who was this team that went on strike in support of their own player?

The Athletics were in the American League, and the others listed were all National League teams. On May 15th at Hilltop Park, Ty Cobb of the Tigers jumped into the stands and began to fight with a fan named Claude Lueker. Johnson then suspended Cobb. One of the local hires for the strike-game, Ed Irvin, played third base and hit two triples in three at-bats for the Tigers.

It was the only game of his career.
3. In 1926, Bob O'Farrell of the Cardinals and George Burns of the Indians won their respective league's MVP. The Senators' Firpo Marberry set a new record for 22 saves in a season. On the other side of the coin were the Red Sox, who set a club record for losing 107 games. Which team won the American League by 44.5 games over the Red Sox?

The Indians was the only other American League team listed. It was 'Murderers Row' as they were nicknamed, who finished the season with a 91-63 record. After a dismal 1925 season due to illness, Ruth came back and hit 47 home runs in 1926. The Yankees would lose to the Cardinals in the World Series, four games to three, in a series that would see Babe Ruth hit four home runs, with three of those in one game.
4. Which American League team made five appearances in the World Series in the 1930s?

The Browns were the only other American League team listed. The Yankees went to the promised land in 1932 against the Cubs. Then they went dry until the season following Babe Ruth's retirement from baseball in 1935. From 1936-1939, the Yankees ran a streak of four consecutive World Series victories, including two against their crosstown rival Giants.
5. 1944 allowed the fans to see the first pitcher in history be ejected from a game for throwing a spitball. Nels Potter of the AL St. Louis Browns was the lucky recipient. The St. Louis fans also saw their Browns go to a World Series for the first time in their 44-year history, but lost to which team four games to two?

The others listed were American League teams as were the Browns, therefore could not have played in the World Series. The first 'subway' series in St. Louis history saw the Cardinals take the wind from the Browns' sails. In a low-scoring series, four games were won by two runs or less. An unknown Cardinal second baseman, Emil Verban, hit .412 in the series having seven hits in 17 at-bats.
6. Although the Milwaukee Braves went to their second consecutive World Series in 1958, Braves' outfielder Henry Aaron finished only third in the National League MVP voting. Which Cub edged out Henry and the great Willie Mays to take the award?

The others were all American Leaguers in 1958. This would be the first of Ernie Banks' two consecutive MVP titles. The NL MVP voting for the season was Banks at 283, Mays had 185, and Aaron received 166 points.
7. Which team in 1969 lasted only one season in baseball?

Montreal was also an expansion team which began their franchise in 1969. Buffalo and the Cleveland organization played in the late 1800s. The Pilots' season in 1969 was a historical one. Their last place finish of 64-98, took the team to Milwaukee to become the Brewers the following season in 1970.
8. 1978 saw Dave Parker of the Pirates and Jim Rice of the Red Sox win the MVPs in baseball. Rollie Fingers won the National League's Rolaids Relief Award for the Padres. Also, which Padre was the first pitcher in history to win the Cy Young Award in both leagues?

The others listed played their entire career in the American League. Gaylord's first Cy Young award came in 1972 with the Indians. After being traded to the Rangers mid-season 1975, the Rangers let him go to the San Diego Padres in 1978. Gaylord shined in that season with a 21-6 record, and topped Burt Hooton and Vida Blue for the Cy Young. Perry retired in 1983 and was inducted into the Hall in 1991.
9. In 1988, who was the only baseball great that was inducted into the Hall of Fame?

The others listed were inducted in the 1930s. "Pops" was the Pirate leader from 1962-1982. Stargell blasted out 475 home runs in 21 seasons for Pittsburgh. Not known for his speed, he stole only 17 bases throughout his entire career.
10. In 1998, who was the first infielder in history to hit 40 home runs and steal 40 bases in a season?

The others had not played baseball for almost 40 years. A-Rod did this in a Mariner uniform. He hit 42 big ones and stole 46 bags. He was 9th on the MVP voting ballot for the season.
Source: Author Nightmare 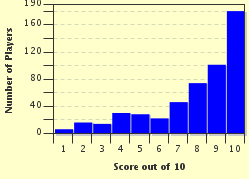