Wow! Did I Do That? Trivia Quiz

All multiple choice about some of the greatest baseball players ever. I hope that you have fun with it! :-)

The others listed were all retired before 1950. Mantle became the first switch-hitter in history to bat for a Triple Crown. His 1956 MVP came over Yogi Berra, and Tigers Al Kaline and Harvey Kuenn. Mickey was the MVP runner-up in 1960 and 1961 both times to teammate Roger Maris. 1962 brought the award back to him, winning it over Yankee teammate Bobby Richardson.
2. I didn't think much that I was the first pitcher in baseball history to win 400 games, but when I won my 500th, I knew that I was someone special. Who am I?

The other pitchers listed never won 300 games in their careers. Young launched his career with the Cleveland Spiders in 1890. Only five times in his career did he win 30 or more games in a season, which showed some real consistency. The MVP award did not begin until 1909, and Cy would have had his share if he wasn't in the closing portion of his career.

He died a year earlier.
3. My 1966 season was amazing, looking from both sides of the fence. One season after going 24-11 with the Braves, I went only 14-11 in 1966. I entered the record books two times in that season. One for being the first pitcher in history to hit two grand slams in a game, and the other for setting a modern day record of throwing 27 wild pitches in the season. Who am I?

The others were all pitchers, but were not born until 1966. What an up and down season Tony had. It was the second consecutive season that he led the league in both walks and wild pitches. Cloninger had only one 20-win season under his belt when he retired in 1972.
4. I won Rookie of the Year award in 1967, a MVP, and seven batting titles. I did this all with Twins in 12 seasons. After being traded to the Angels for the 1979 season, I played their until I retired in 1985. Who am I?

The others were all career Minnesota Twins. From 1967-1978, Rod wreaked havoc in the American League. Strangely enough, after his trade to the Angels there were no more awards, no more batting titles, no more recognition. He was still inducted into the hall in 1991.
5. What a great career I had, but I was always under the radar with teammates like Babe Ruth and Lou Gehrig. In 10 seasons with the Yankees, I had at least 130 hits each time. My numbers were good enough to be a star on any team other than Murderer's Row. Who am I?

None of the others were Yankees. Meusel shared the outfield with Ruth and Earle Combs. Bob went to six World Series with the Yankees. His season high was 190 hits in 1921. His 11th and final season was with the Cincinnati Reds in 1930.
6. After winning 48 games in the 1883 season with the Providence Grays, baseball changed up its rules to make it more appealing for the batters. I showed them by winning a record 59 games in 1884. After more changes for 1885, I won only 28 games. Who am I?

Ruth hit 40+ home runs 11 times, but was in the top 15 for the MVP only three times due to restrictions for the award. Schmidt of the Phillies hit 40+ three times in his career. Jackson reached the 40-plateau only twice in his career. Aaron played 21 of his 23 seasons with the Braves, then his final two as a Milwaukee Brewer.

In a show of consistent force in 'old-time' baseball, Hank hit 40+ plus home runs eight times, and never more than 47. Amazingly, he won only one MVP award and was never a runner-up.

His MVP came in 1957 over Stan Musial and Red Schoendienst in the season that took the Braves franchise to their second World Series title. Although Hank batted .393 and hit three home runs in the series, Braves pitcher Lew Burdette won the series MVP for his three wins.
8. 1966 belonged to me. I was a MVP, a Triple Crown hitter, and I won the World Series MVP all in the same season. Who am I?

Frank was the 1956 Rookie of the Year and 1961 MVP winner with the Reds. He was traded from the Reds after the 1965 season to Baltimore. He was the World Series MVP against the Dodgers. Robinson played for 21 seasons. He later managed the Indians, Giants, Orioles, and the Expos/Nationals.
9. Even after I turned 40 years old, I still stole 139 bases until I retired. I played for 25 seasons. Who am I?

Other than Anson, the others didn't play past the age of 40. Henderson broke almost every stolen base record in baseball, from his 130 stolen in 1982, to his career record-setting 1406. He retired in 2003. Anson played from 1871-1897 in both the National Association and National League, and mostly with the Chicago White Stockings.

He retired with only 276 stolen bases because in 10 of his seasons, no records were kept for stolen bases. Cap was a player-manager most of his career, and took Chicago to five National League titles.
10. My first seven seasons were with the Cardinals, then I was traded to the Phillies in 1972. I won the Cy Young and threw a Triple Crown in 1972 with my 27-10 record, and my teammates were sure laughing at the Cardinals. In 1973, the Cardinals were laughing at me because I lost 20 games in that season. I would have the last laugh by going on to win three more Cy Young awards. Who am I?

The others were not Cardinals or Phillies. Carlton retired after 24 seasons in 1988 as a Twin. All four Cy Young awards came in a Phillies uniform. Steve was also the second pitcher in history to strike out 4000 batters. He and the Hall of Fame shook hands in 1994.
Source: Author Nightmare 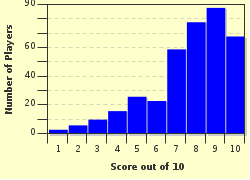