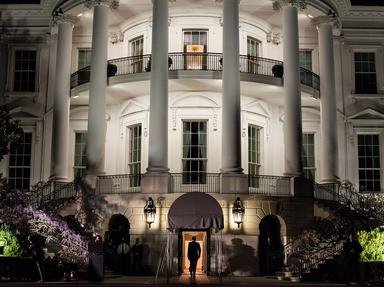 A quiz on the 10th president of the United States, John Tyler.

Share on Facebook
Share on Twitter
Share by E-Mail
Author
AdmiralShark
Time
5 mins
Type
Multiple Choice
Quiz #
182,762
Updated
Jan 17 22
# Qns
15
Difficulty
Tough
Avg Score
8 / 15
Plays
367
This quiz has 2 formats: you can play it as a or as shown below.
Scroll down to the bottom for the answer key.

Quiz Answer Key and Fun Facts
1. How old was Tyler when his mother died?

Mary Tyler died in 1797. Little is known about her.
2. John Tyler was at one time believed to be a great-great-great-uncle to which future US President?

It was thought at one time that Truman's Tyler ancestry was also that of President John Tyler, but latest scholarship (2021) casts doubt on this claim.

Herbert Hoover and Richard Nixon are 8th cousins, once removed.
3. How many children did Tyler have by his two marriages that lived to maturity?

Tyler had seven kids that lived to maturity by his first wife and seven by his second. His last living child, Pearl, died in 1947.
4. While Tyler was a member of the House of Representatives, he supported the Missouri Compromise of 1820.

Tyler was one of the opposition leaders to the Compromise. Tyler believed that the Compromise was unconstitutional because it granted congress the power to restrict slavery.
5. Because of his service in the War of 1812, Tyler was awarded a veteran's bonus of 160 acres. That land was located near what present US city?

Tyler's unit was assigned to the defense of Richmond during the war. They saw no action.
6. Which of these offices did Tyler not hold before becoming vice-president in 1841?

Webster served as secretary of the state from 1841-43, Upshur from 43-44 and Calhoun from 44-45. John Bell was secretary of war during the Tyler administration.
8. The veto of what bill by Tyler caused every member of his cabinet, except one, to resign?


Answer: creation of the 3rd Bank of the US

The Whigs in congress wanted to establish a 3rd Bank of the US but Tyler twice vetoed bills that would have done that. Both vetoes were sustained. In protest of the president's vetoes, the entire cabinet resigned except for Daniel Webster, who was working on a treaty with England.
9. Six people were killed when a cannon exploded during a firing exhibition attended by Tyler on February 28, 1844. The cannon was named what?

Among the six killed in the explosion were Secretary of State Upshur, Navy Secretary Thomas Gilmer, and David Gardner, the father of his future wife.
10. Who was the only man that Tyler nominated to the US supreme court?

Nelson served on the bench from 1845 to 1872. Taney was nominated by Andrew Jackson, Grier by James Polk and McKinley by Martin Van Buren.
11. Texas officially became a state during the Tyler administration.

While Tyler signed the joint congressional resolution only days before he left office, Texas did not officially become a state till December 1845.
12. What was the name of the hotel that Tyler was staying at when he died in 1862?

Tyler was staying at the Exchange Hotel awaiting the start of the Confederate Congress, which he was a member of. He fainted on January 12th at the hotel and died 6 days later.
13. What were John Tyler's last words?


Answer: Perhaps, it is best.

Tyler's last words came in a conversation with his doctor. "Please put out the light" were the last known words of Theodore Roosevelt and "I want to go, God take me" were Eisenhower's last words. "Doctor, I am going" was the next to last sentence spoken by Tyler.
14. John Tyler was buried in Hollywood Cemetary in Richmond near which former US president?

Monroe was reburied in Richmond in July 1858, after being buried in New York City upon his death in 1831. Harrison is buried in North Bend, Ohio; Madison is buried in Montpelier, VA; and Taylor is buried in Louisville, KY.
15. When did the US Congress authorize a memorial stone for the grave of John Tyler?

This quiz was reviewed by FunTrivia editor thejazzkickazz before going online.
Any errors found in FunTrivia content are routinely corrected through our feedback system.
Most Recent Scores
Jan 11 2023 : Guest 162: 6/15
Dec 17 2022 : Guest 89: 6/15 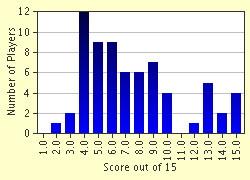 
Other Destinations
Explore Other Quizzes by AdmiralShark