Lyrics Through The Years 2 Trivia Quiz

The song is "Build Me Up Buttercup"; it is a well known song, which is popularly featured in the 1998 film "There's Something About Mary". The actors to the film, which includes Ben Stiller and Cameron Diaz, made a music video to the song, where all the actors can be seen miming the lyrics to the song.
2. 1960s: Who sang these lyrics, ""hands, touching hands, reaching out touching me, touching you"?

The song is "Sweet Caroline". Neil Diamond is one of America's most successful singers. As of 2010, Diamond has been entertaining for at least six decades. "Sweet Caroline" is particularly popular at sport events, and as a karaoke song choice.
3. 1970s: Who sang, "It's a little bit funny this feeling inside, I'm not one of those who can easily hide"?

The song is "Your Song". Elton John is a highly successful British singer-songwriter, his real name is Reginald Dwight. Another popular song by Elton was "Candle in the Wind", which was originally written in memory of Marilyn Monroe, and later rereleased in memory of Diana, Princess of Wales.
4. 1970s: Who sang this, "well, you're where you should be all the time, and when you're not, you're with some underworld spy or the wife of a close friend"?

The song is "You're So Vain". It has been rumoured to have been written about Warren Beatty.
5. 1980s: Who sang the following lyrics, ""Why do I find it hard to write the next line?"?

The song is "True". Spandau Ballet consists of the members Tony Hadley, Martin Kemp, Gary Kemp and John Keeble. Brothers Martin and Gary Kemp featured in the film "The Krays", showing they were not only good at singing. Martin Kemp went on to play Steve Owen in the popular British soap "Eastenders". In 2009 the band reformed, with various tours and and an album entitled "Once More".
6. 1980s: Who sang this, "Eisenhower, vaccine, England's got a new queen"?

The song is called "We Didn't Start The Fire". This song is a brilliantly written song, and consists of headlines during Billy Joel's lifetime from March 1949-1989. Some of the things mentioned include Marilyn Monroe, Marlon Brando, Joseph Stalin, "Rock Around the Clock", Elvis Presley, Hula Hoops and Disneyland. Amongst a heap more! Look it up!
7. 1990s: Who sang, "Can you tell me? You say you can but you don't know"?

This band was formed by brothers, Isaac, Zac and Taylor. "Mmm Bop" is their most well known song.
8. 1990s: Who sang, "show me how you want me to be, tell me baby cos I need to know now"?

The song is "Baby One More Time", it was the first single to be released by Britney. She has since released over five albums. She has also starred in various tv shows and films, such as "Crossroads" and "The Simpsons".
9. 2000s: Who sang, "we only said goodbye with words, I died a hundred times"?

The song is "Back to Black". Other songs by Amy Winehouse include "Rehab" and a cover of the Zutons' song "Valerie".
10. 2000s: Who sang, "grew up in a small town, and when the rain would fall down, I'd just stare out my window"?

The song is "Breakaway". Kelly Clarkson shot to fame when she won the first season of hit show "American Idol" in 2002. As of 2009, she had released four albums.
Source: Author leanneuk02 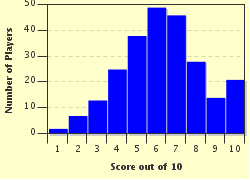 
Other Destinations
Explore Other Quizzes by leanneuk02