Do you like Cap'n Crunch's Crunch Berries cereal? I do. If you do too, then this is the quiz is guaranteed to make you run for a bowl when you are done.

The Quaker Oats company came out with the first box of Cap'n Crunch in 1963 with very successful results.
2. In America, Cap'n Crunch's Crunch Berries was the most popular children's breakfast cereal from 1965 until 1971 when another new cereal came out and claimed first place in children's tummies. Do you know which cereal knocked Cap'n Crunch out of first place?

The correct answer is Fruity Pebbles. This was a fruity crisped rice cereal produced by Post cereals. It was named after a character off of the television cartoon "The Flintstones".
3. There have been many flavors of Cap'n Crunch. Which of the following is not a real one?

There has never been an Easter Egg Crunch. Deep Sea Crunch had Crunch Berries shaped like sea animals. Vanilly Crunch was a short lived flavor in the 1970s. Christmas Crunch was first introduced during the 1988 holiday season. It had red and green Crunch Berries and on the box the Cap'n sported a Santa Clause hat.
4. While we are thinking about flavors of Cap'n Crunch, has there ever been a chocolate flavored version?

In 1980's Quaker Oats came out with the chocolate version and called it Choco Crunch. It had regular Cap'n Crunch squares, but instead of crunch berries it had round chocolate flavored pieces. It was reintroduced in 2005, both times it had only limited success.
5. In May of 2007 Cap'n Crunch's full name was finally revealed around the world to be which of the following?

In an ad campaign in 2007 to boost dropping sales, the Captain's real name was revealed to be Captain Horatio Magellan Crunch. This was a vital piece of information for any Cap'n Crunch aficionado to know!
6. In a 2009 California lawsuit, a woman sued the maker of Cap'n Crunch saying they had misled her for years into thinking she had been eating real fruit when she ate Crunch Berries and that her health was irreparably damaged.

Simply put...she lost!
7. At one time small toys were included in boxes of Cap'n Crunch. One of these led to a 5 year probation sentence for someone who used it incorrectly. What was this toy?

In 1971 an American named John Draper was sentenced to 5 years probation after it was found that he used a whistle he had gotten from a box of Cap'n Crunch could enable him to make free long-distance calls if he blew the whistle into his telephone. The whistle had been modified to make a noise at exactly 2600 Hertz, which was the same frequency used by AT&T to open long distance lines.

When the whistle broke he invented a couple of new devices that could produce the same noise frequency. He has been give the dubious nickname of Crunchman!
8. In spite of its wonderful taste Cap'n Crunch's Crunch Berries is one of the most nutritious breakfast cereals you can eat.

Sadly, this is not true. The Rudd Center for Food Policy and Obesity which is located at Yale University deemed Cap'n Crunch's Crunch Berries the lowest nutritional score of any of the cereals that are marketed to children. High sugar content and low nutritive value combined to make a very poor showing indeed.
9. In early commercials what was the name of Cap'n Crunch's dog?

The Cap'ns dog is named Sea Dog and he sailed with the Cap'n aboard "The Good Ship Guppy".
10. I know you have seen it a hundred times, but what color is Cap'n Crunch's hat?

The box is red and Cap'n Crunch's uniform is blue including his hat. It does have a yellow "C" on it.
Source: Author dcpddc478 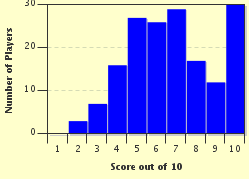