Cooking is a necessity but it's also a pastime and hobby. Many non-cooks watch the Food Network for entertainment and today most of us eat out at least once a week. So, let's see how familiar you are with things culinary.

Quiz Answer Key and Fun Facts
1. What is often added, in a very small quantity, to the water when preparing poached eggs?

Poached eggs can be poached to taste. Take the egg out of the water sooner for a soft and runny yolk and leave it in longer for a hard yolk.
2. What flour is used in making one type of tortilla?

Tortillas can be made with either corn flour (harina masa) or wholewheat flour. A cast-iron tortilla press is ideal for shaping the tortillas.
3. What causes the blue veining in blue cheese?

Although blue cheese salad dressing is a regular choice in restaurants, it's not everyone's favorite cheese on its own. Try it paired with grapes or pears.
4. Which ingredient isn't found in a standard cheese cake recipe?

Cheese cake comes in many versions. New York cheese cake usually has a cherry topping and Italian cheese cakes often use mascarpone cheese, have no topping. There are recipes using Brie as I very recently learned.
5. What is the main ingredient in bouillabaisse?

Bouillabaisse originated in the South of France and was made using any local fish caught by the fisherman that day. Fish that require the least cooking are added to the cooking pot last, longer cooking being added first.
6. If you're making a typical American gingerbread cake, what is one of the spices that's typically included along with powdered ginger?

Gingerbread can be a soft crumb cake, a hard,dense cake or a crisp cookie, often made in the shape of gingerbread men. In England, gingerbread making is centuries old. This long-keeping confection was often sold at local fairs.
7. What item is a 'must' at a traditional English afternoon tea?

Food at traditional afternoon tea is small and dainty, e.g., small, crustless, cut sandwiches, and dainty baked goods. These tidbits are easy to balance with a tea cup already in hand.
8. What ingredient is essential to a Manhattan clam chowder?

If a meat is served 'au jus', the pan juices that have accumulated in the cooking or roasting pan, are served with it, not a thickened sauce, e.g., thickened gravy.
10. Which of the following isn't a tea variety?

Tea drinking is an art in Japan and a traditional ritual in most of Asia. 'The cup that cheers' is often the beverage of choice in Great Britain. There's been a resurgence of tea drinking in North America lately with a wide variety of teas available.
Source: Author Raki1 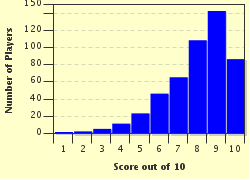 
Other Destinations
Explore Other Quizzes by Raki1