I'll give you the name of a popular rock CD and you just pick the song that was not included. Good luck.

Share on Facebook
Share on Twitter
Share by E-Mail
Author
diamondjim68
Time
4 mins
Type
Multiple Choice
Quiz #
338,256
Updated
Dec 03 21
# Qns
10
Difficulty
Tough
Avg Score
6 / 10
Plays
293
This quiz has 2 formats: you can play it as a or as shown below.
Scroll down to the bottom for the answer key.

Quiz Answer Key and Fun Facts
1. One of my favorites is Led Zeppelin's fourth untitled album. Which of these songs is not included?

'Whole Lotta Love' was from 'Led Zeppelin II', the group's second album. Led Zeppelin's fourth album, which is also commonly referred to as 'Zoso', was released in 1971.
2. Pink Floyd's "Dark Side Of The Moon" was another personal favorite. There were many great songs on that album. Which of these songs, however, was not one of them?


Answer: Another Brick In The Wall Part 2

'Another Brick In The Wall Part 2' was released on Pink Floyd's 1979 double album, 'The Wall'. 'Dark Side Of The Moon' was released in 1973 and was one of the top selling albums of all time.
3. The Beatles released a self-titled double album in 1968. Which of these heavy Beatle rockers was not on the album?

'I Want You (She's So Heavy) was released on the Beatles' 'Abbey Road' album, released in 1969. John Lennon wrote the song about his wife, Yoko. This was one of the longest songs the group ever released, at 7 minutes and 49 seconds.
4. In 1977, The Eagles put out an album entitled "Hotel California". Which of these songs was not on the album?

'Heartache Tonight' was from the Eagles' 1979 album 'The Long Run'. The single sold a million copies and was number one on the American Billboard charts for one week. The song also won a Grammy for Best Rock Performance.
5. In 1984, the Cars released "Heartbeat City". Which of their best known songs was not included?


Answer: Just What I Needed

'Just What I Needed' was from the Cars' self-titled debut album, released in 1978. The song originally appeared on WBCN, a radio station in Boston. The song later became one of their most requested songs.
6. Which Billy Joel song was not included on "An Innocent Man"?


Answer: We Didn't Start The Fire

'An Innocent Man' was released in 1983. 'We Didn't Start The Fire' was from Joel's 1989 CD, 'Storm Front'. The song went to number one and became one of the most parodied songs ever.
7. Poison's "Open Up And Say Ahhh" was released in 1988. Which of their better known songs was not on this CD?


Answer: Something To Believe In

'Something to Believe In' was from Poison's 1990 'Flesh And Blood' CD. The song was written by singer Bret Michaels, whose best friend and security guard committed suicide on Christmas Eve, 1988.
8. Which song by the Red Hot Chili Peppers was not included on their CD "Blood Sugar Sex Magic"?

'Blood Sugar Sex Magic' was released in 1991. 'Higher Ground' was from the group's 1989 CD, 'Mother's Milk'. The song was a cover from Stevie Wonder.
9. Billy Idol's 1984 album "Rebel Yell" included all these songs except for which?


Answer: Dancing With Myself

billy Idol was a British rocker who was originally a member of the punk group Generation X. 'Dancing With Myself' was recorded by the group but when Idol went sols, he re-mixed the song for his 1981 EP 'Don't Stop'. Over the years, the song has been known as a popular sports anthem.
10. In 1999, Eminem released his "The Slim Shady LP" CD. Which song did he not include?

'The Real Slim Shady' was from Eminem's 2000 CD 'The Marshall Mathers LP'. Marshall Mathers is Eminem's given name. The song reached number one on the UK singles chart and won several awards at the MTV Music Awards in 2000. These included Best Video of the Year and Best Male Video. It also won a Grammy for Best Rap Solo Performance.
Source: Author diamondjim68

This quiz was reviewed by FunTrivia editor agony before going online.
Any errors found in FunTrivia content are routinely corrected through our feedback system.
Most Recent Scores
Jan 15 2023 : pollucci19: 10/10
Dec 31 2022 : Guest 75: 5/10 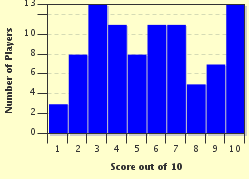 Related Quizzes
1. Which Album Did They NOT Record? Average
2. Why Is That Album in My Collection?! Average
3. Album Matching Trivia Average
4. Off the Beaten Track I Tough
5. Concept Albums Average
6. What Album Am I? Average
7. It's the End of the World Average
8. Finish the Album Title Easier
9. Title Songs of Albums Difficult
10. What Album Do I Come From? Difficult
11. What Album Do I Come From? #3 Average
12. An Initial Take on Classic 'Sixties Albums Average