All DMB fans know that the heart and soul of this band is in their live performances. Here are some questions of specific performances they have done.

Share on Facebook
Share on Twitter
Share by E-Mail
Author
Alinicus
Time
5 mins
Type
Multiple Choice
Quiz #
116,899
Updated
Dec 03 21
# Qns
10
Difficulty
Tough
Avg Score
6 / 10
Plays
767
This quiz has 2 formats: you can play it as a or as shown below.
Scroll down to the bottom for the answer key.

Quiz Answer Key and Fun Facts
1. According to DMB legend, the first live show was performed where?


Answer: On the roof of an apartment building known as the "Warehouse"

This "Warehouse" is located in Charlottesville, Virginia.
2. What university did the band play many gigs at in order to get themselves established?

They played frat parties, mostly, to get their name out.
3. What was the name of the club that the band played their weekly Tuesday night gigs early on in their career?

Trax was a club in Charlottesville that the band played pretty much every Tuesday night during the early 90's. Trax was recently torn down to make room for the expansion of a nearby hospital.
4. Late in 1997 DMB opened 3 U.S. shows for what ultra-huge band?

They played shows in Texas, Florida and Missouri.
5. What former band member played his final show with the band on March 23, 1993?

This show also came to be known as the "Big League Chew Show" and is one of the most widely traded shows among DMB show traders.
6. In 1996 Dave Matthews and Tim Reynolds teamed up to record "Live at Luther College". This was released as a 2 CD live set. Where is Luther College?

Westerly, RI is actually my home town.
7. Dave Matthews band played at Woodstock '99 at Griffis Air Force Base in Rome, NY. Which of these songs was NOT on the setlist from that performance?


Answer: Drive In, Drive Out

A very high-energy set on Friday afternoon, the band drew one of the largest crowds of the weekend.
8. In which state was "Listener Supported" recorded?

They recorded "Listener Supported" at the Continental Airlines Arena in East Rutherford, NJ.
9. Which of these special guests has NOT performed live with Dave Matthews Band?

Lenny Kravitz performed with the band on May 5, 2001 at the New Orleans Jazz and Heritage Festival. James Brown performed with them on December 21, 2002 in Madison Square Garden and Al Green sang with them on June 30, 2000 in Chicago at Soldier Field.
10. In 2001, celebrating the release of 'Everday', DMB played to a sold out show in their hometown of Charlottesville, VA. What song opened that famous show?

Dave was admitedly nervous to do that show. During his intro to "Two Step" he changed some of the lyrics singing, among other things, "..coming home is such a pleasure..." referring to the fact that they were, in fact, home. I happened to be a that show and it was a great moment for a fan.
Source: Author Alinicus 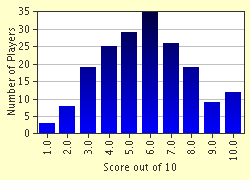 
Other Destinations
Explore Other Quizzes by Alinicus