Formed in the early 1980s, Metallica is still crushing audiences all over the globe and shows no signs of slowing down. Take this quiz to see how much you think you know about one of Heavy Metal's most legendary groups.

Share on Facebook
Share on Twitter
Share by E-Mail
Author
TheWOPR
Time
6 mins
Type
Multiple Choice
Quiz #
318,197
Updated
Dec 03 21
# Qns
10
Difficulty
Difficult
Avg Score
5 / 10
Plays
1143
Awards
Top 20% Quiz
This quiz has 2 formats: you can play it as a or as shown below.
Scroll down to the bottom for the answer key.

Quiz Answer Key and Fun Facts
1. The song "Until It Sleeps" from Metallica's 1996 album "Load" was known by what title before being officially recorded?

"Mouldy" was an early title for the song "Hero of The Day" from the same album.
2. Metallica was nominated for a Grammy Award for their 1988 album "...And Justice For All" but lost to which progressive rock group?

Metallica had performed the single "One" from the Grammy nominated "...And Justice For All" live at the awards show before the loss.
3. Guitarist Kirk Hammett is of which three ethnic backgrounds?

Kirk, whose mom is Filipino-Spanish and father is Irish, was born November 18, 1962 in San Francisco.
4. Which famous musician was considered for the job of producer for 1988's "...And Justice For All"?

When this idea didn't work out, Metallica hired producer Mike Clink, who was soon replaced by Flemming Rasmussen. Flemming had worked with Metallica on their two previous albums.
5. Which of the following titles has NOT appeared on a Metallica album?

The correct title is "Attitude", which appears on 1997's "ReLoad".
6. At the end of their 1987 release "Garage Days Re-Revisited", Metallica humorously parodies about 15 seconds of which classic heavy metal song?


Answer: "Run To The Hills" by Iron Maiden

The band intentionally butchered the song which is unlisted on the out of print original release.
7. Metallica's '88-'89 "Damaged Justice Tour" featured an elaborate Roman temple backdrop with a large statue of Lady Justice. What was the nickname given to the Lady Justice statue by the band?

The head of the statue can be seen decorating the band's San Rafael, CA rehearsal space in the 2004 documentary "Some Kind of Monster".
8. Former bassist Jason Newsted quit the band in which year?

Jason joined the band in 1986 after original bassist Cliff Burton was killed in a bus crash while on tour.
9. Which guitarist of another metal band has filled in for James Hetfield for several shows in 1986 and 1992 when James was injured?

John Marshall can be seen onstage with Metallica in 1992 on the "A Year and A Half in The Life Of Metallica" DVD.
10. Which of these bass players auditioned for Metallica after Jason Newsted's departure?

Twiggy Ramirez, whose real name is Jeordie White, was also a member of the group A Perfect Circle.
Source: Author TheWOPR

This quiz was reviewed by FunTrivia editor ralzzz before going online.
Any errors found in FunTrivia content are routinely corrected through our feedback system.
Most Recent Scores
Jan 02 2023 : Guest 98: 10/10
Dec 31 2022 : Guest 71: 2/10 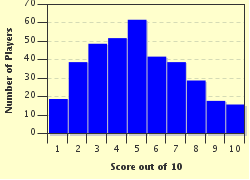 
Other Destinations
Explore Other Quizzes by TheWOPR