Do you know much about music? Test your skills on popular pop and rock music with this challenging quiz.

Quiz Answer Key and Fun Facts
1. This band debuted in 1976, and featured an album cover with a guitar shaped spaceship. Who were these guys?

Boston was originally meant to be a showcase for guitarist and MIT student Tom Scholz to demonstrate his innovative musical equipment. Lead singer Brad Delp committed suicide in March of 2007.
2. Which of the following bands had four women in it, including one named Michael?

The Bangles' biggest hit was "Walk Like An Egyptian".
3. Finish the lyric: "Now all around the world, girls will be girls, it's the...":

The song "Same Ol' Situation" by Motley Crue song was on their 1989 album "Dr. Feelgood".
4. Which famous guitarist was featured on the Michael Jackson hit "Beat It"?

Eddie Van Halen was born in Nijmegen, Netherlands.
5. "People Are People" was a hit song for which of these UK 80s electro-wave groups?

The song "People Are People" deals with the issue of racism.
6. Johnny Cash covered an unlikely band at the end of his long career. Which band's song did he cover?

Johnny Cash covered the song "Hurt" by Nine Inch Nails in 2002. It was his last hit song before his death. The video for this song shows Cash, as an old man, looking back on his life; it takes on a somber mood that pulls at your emotions.
7. Finish the lyric: "In 1814, we took a little trip ______"


Answer: along with Colonel Jackson down the mighty Mississip.

Johnny Horton's "Battle of New Orleans" was a hit in 1959.
8. Before "Live Through This", Hole (the band with Courtney Love) had an album titled:


Answer: Pretty On The Inside

Courtney is the widow of Nirvana singer and guitarist Kurt Cobain.
9. Who wrote "Me And Bobby McGee"?

Versions of this song have been recorded by both men and women. The best known version is the one recorded by Janis Joplin, which became a hit in 1971, after her death.
10. Burt Bacharach wrote a lot of songs in the '60s and '70s. Which of these songs written by Mr. Bacharach in the '60s was a huge hit in the 1980s?


Answer: "(There's) Always Something There to Remind Me" by Naked Eyes

Burt recorded his song "What The World Needs Now" with The Posies for the "Austin Powers" soundtrack in 1997.
11. Nirvana covered a few songs by other bands on their "MTV Unplugged In New York" album. Who originally did the song "Jesus Doesn't Want Me For A Sunbeam"?

Nirvana singer and guitarist Kurt Cobain committed suicide in 1994. Drummer David Grohl has gone on to front his own band, Foo Fighters, and Krist Novoselic is a left-leaning political activist who has been in lesser known bands after Nirvana's demise.
12. The late Brad Nowell of Sublime was a dog lover. What was his beloved dog's name?

Brad Nowell sings about his dog in the hit song "What I Got". Lou use to hang out on stage with the band during performances.
Brad died of a drug overdose in 1996.
Lou Dog died in September, 2001.
13. On R.E.M's 1991 album "Out of Time", singer Michael Stipe and the boys collaborated with which rapper on the song "Radio Song"?

KRS-One echoes Stipe on the lyric "hey, hey, hey", and does a rap toward the end of the song.
14. What town are the members of R.E.M originally from?

Other bands to come out of Athens are The B-52s, Widespread Panic, Neutral Milk Hotel, The Olivia Tremor Control, and the extremely LOUD Jucifer.
15. One of my favorite bands is the New York based Interpol. What does the word "Interpol" also refer to?

Interpol's sound has been compared to that of Joy Division. It is said that the band did not name themselves after the international police, but it's instead a play on the lead singer's name, Paul.
16. Who was Desmond Dekker?

Desmond Dekker died in May of 2006. His best known song was the Ska hit "Israelites" in 1969.
17. Which sensitive alt-rocker use to dress up in a bear suit, mingle with his fans, and bash his own music before concerts?

John Mayer use to mingle with his unsuspecting fans before concerts in a bear suit, often saying derogatory things about himself. Even though his songs are sensitive and serious, he's a very funny guy. He's even done some stand-up comedy.
18. Henry Rollins was once a member of which '80s punk band?

Henry Rollins joined Black Flag after getting on stage with them during one of their shows. Since being in Black Flag, Rollins has hosted a talk show, been in several movies, and has recorded solo music and spoken word albums.
19. Which of the following musicians did NOT die at the age of 27?

Television was one of the bands that got their start playing at CBGBs in New York City. Television's debut "Marquee Moon" is their most popular album, released in 1977.
22. In the Guns'n'Roses video for the hit song "November Rain", which super model is set to marry lead singer Axl Rose during the wedding scene?

In 1992, when this video was made, Miss Seymour and Mr. Rose were dating.
23. Which of the following bands are not from Washington state?

Sonic Youth are from New York.
24. The night that Buddy Holly, The Big Bopper and Richie Valens died in a plane crash is often referred to as "the day the music died". In which US state did that fatal crash occur?

Don McLean's "American Pie" is partly about this incident.
25. Which song in full length is longer?

The song "Close to the Edge" by Yes is over 18 minutes long!
Source: Author galaga6846 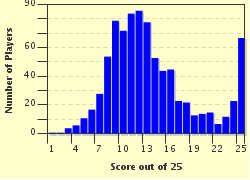 
Other Destinations
Explore Other Quizzes by galaga6846